What led to the political comeback of the Marcoses

Ronalyn V. Olea November 10, 2016 5 Comments Campaign Against the Return of the Marcoses to Malacañang (CARMMA), marcoses 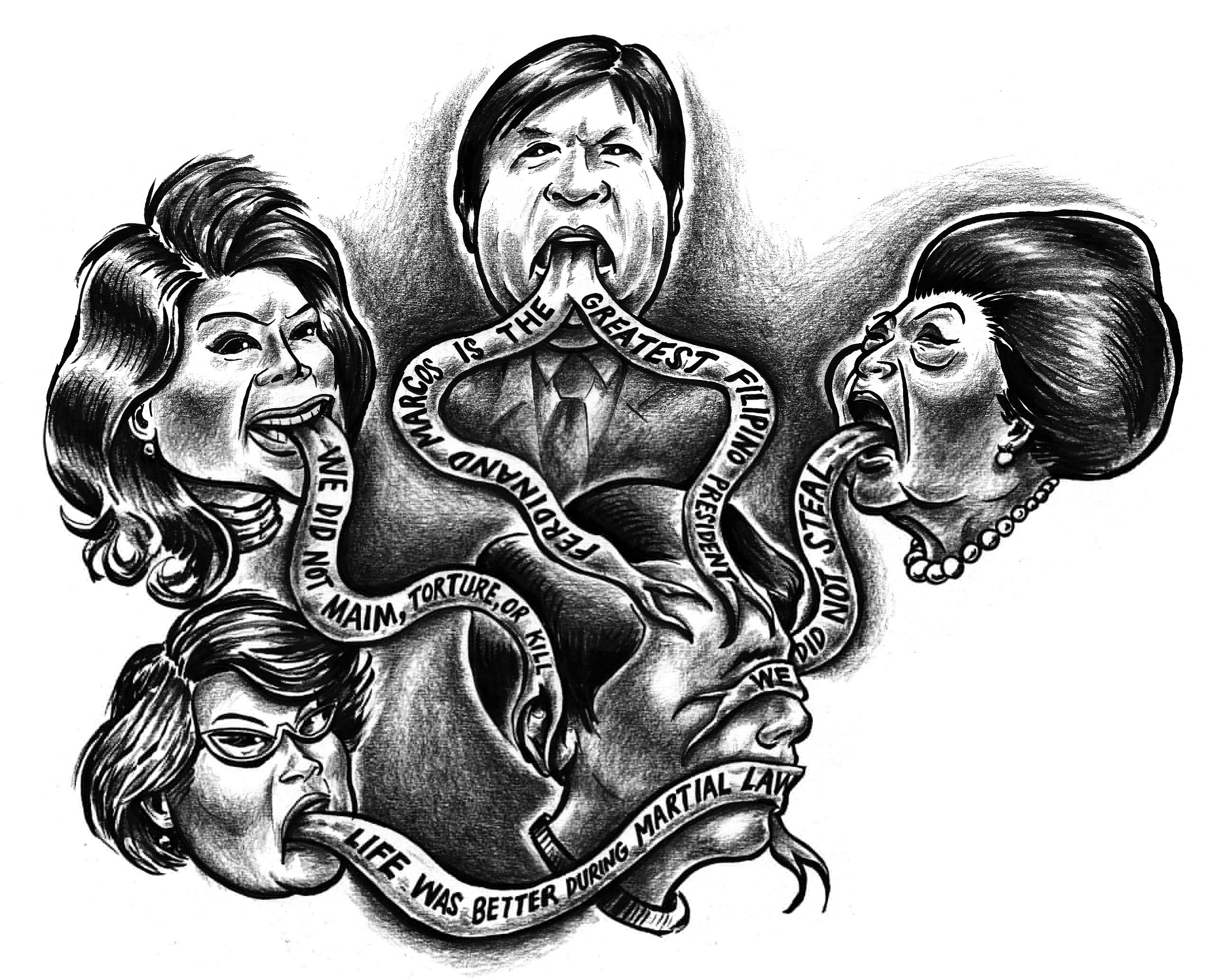 With so much ill-gotten wealth and alliances with other members of the ruling elite, it’s no wonder the Marcoses were able to win elections.

MANILA — The Supreme Court decision allowing hero’s burial for the late dictator Ferdinand Marcos may have shocked many but it’s a tragedy waiting to happen.

After Marcos was toppled through a people power uprising in 1986, the Corazon Aquino administration and the succeeding regimes did not seriously hold the Marcoses accountable for plundering the nation’s wealth and for gross human rights violations.

Carol Araullo, chairperson of Bagong Alyansang Makabayan (Bayan), said that the political and economic clout of the Marcoses should have been cut.

The Presidential Commission on Good Governance (PCGG) tasked with the recovery of ill-gotten wealth of the Marcoses and cronies claims it has recovered $4 billion in cash and assets, less than half of the $10-billion fortune believed to have been amassed by the Marcoses. Pending cases of ill-gotten wealth against the Marcoses amount to more than $365 million, according to the Office of the Ombudsman. There are more than 200 cases filed against Marcos heirs and cronies.

Marcos was never prosecuted in the country for gross human rights violations. According to Amnesty International, 3,240 were killed; 34,000 were tortured and 70,000 were imprisoned during the Marcos dictatorship. The Human Rights Victims Claims Board, meanwhile, has already received more than 75,000 applications for compensation.

While various Supreme Court jurisprudence declare Marcos a dictator and human rights violator, no Truth Commission or special courts were created to prosecute Marcos for such crimes.

Meanwhile, many repressive decrees and jurisprudence issued during the dictatorship remain in force to this day. This includes Batas Pambansa 880 (BP 880) that restricts and controls the right to peaceful assembly and Presidential Decree 1866 as amended, allowing the filing of charges of illegal possession of firearms with respect to political offenses.

It was the martial law victims themselves, through Samahan ng Ex-Detainees Laban sa Detensyon at Aresto (Selda), who filed the class suit in Hawaii after Marcos was overthrown in 1986. In 1995, the Federal Court of Hawaii found Marcos guilty of grave human-rights violations and awarded $2 billion in compensatory damages to the victims.

That it took 15 years for a compensation law to be passed is yet another indication of the succeeding administrations’ failure to give justice to the victims and to the political influence of the Marcoses.

With so much ill-gotten wealth and alliances with other members of the ruling elite, it’s no wonder the Marcoses were able to win elections.

In 2013, Imee and Imelda won another term. In the last elections, Bongbong lost the vice presidency by a very slight margin. Imee won her third term as Ilocos Norte representative and Imelda as the provincial governor.

As Bonifacio Ilagan, spokesperson of the Campaign Against the Return of Marcoses in Malacanang (Carmma) put it, “Political accommodation has been the order of the day.”

The failure of the educational system and other cultural institutions to chronicle and teach historical facts about the Marcos dictatorship led to the absence of any collective memory.

In some textbooks, the Marcoses are even glorified. Their atrocities were never made known to the younger generations. While Republic Act 10368, also called as the Human Rights Victims Reparation and Recognition Act of 2013 mandates the creation of Human Rights Violations Victims’ Memorial Commission, which, among others, shall ensure the teaching of Martial Law in education curricula, this has yet to be implemented.

For Fr. Dionito Cabillas, SELDA spokesperson, the recent Supreme Court decision is a reminder that the oligarchy still reigns in the country and the struggle for justice, freedom and democracy continues.