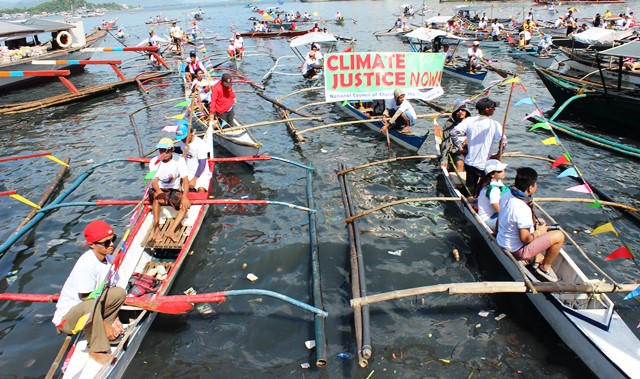 The survivors continue to need today assistance in livelihood, reparations, and efforts to address the roots of the vulnerability of their communities to climate-induced disasters.

MANILA – “The survivors of super-typhoon Yolanda (international name: Haiyan) are strong people. They have struggled to rise up amidst diversity, despite being abandoned by the government in many cases.”

This is how Rev. Rex RB. Reyes, Jr., general secretary of the National Council of Churches in the Philippines (NCCP), described the gathered Yolanda survivors as they marked the third year since the tragic storm surges.

In Tacloban City where thousands died, Yolanda survivors from fishing villages of Leyte and Samar held a fluvial parade. From the shores of Basey, Samar early morning of November 8, they crossed San Pedro Bay to arrive at Tacloban City.

As in the previous two years of commemorating the survivors’ plight during and after Yolanda, they raised the demands for “proper rehabilitation.”

Reyes also said the survivors continue to need today assistance in livelihood, reparations, and efforts to address the roots of vulnerability of their communities to climate-induced disasters.

He clarified that the people’s claim to assistance is not a pleading for charity, but a cry for their basic right to assistance to be recognized.

The fisherfolk joined the gathering of survivors in Tacloban city aboard fishing boats that were mostly provided by the NCCP in cooperation with ACT Alliance, a global alliance of Christian churches and related organizations in over 140 countries.

They docked in Tacloban City’s Baluan Boulevard, where bishops, priests, pastors and church workers from member churches of the NCCP, as well as representatives of NCCP partners, were waiting for them. They held an ecumenical worship service in the boulevard.

Aside from helping to provide the fisherfolk with boats, the NCCP is implementing other projects with the typhoon survivors to help them get back on their feet. This includes constructing resilient shelter as defined by the resources they have and the survivors’ participation. 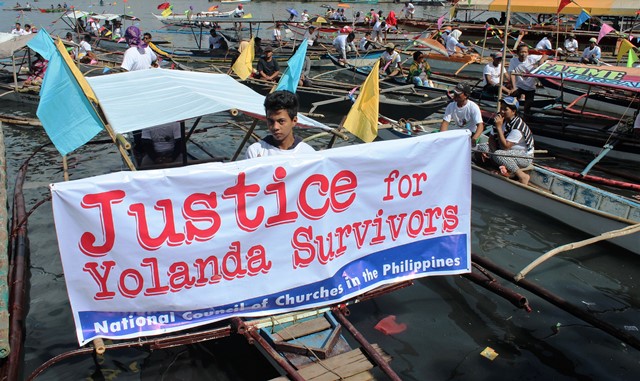 “The churches’ response for relief and rehabilitation is a form of accompaniment and solidarity for the people to rise up for their dignity and rights,” said Rey Natividad, NCCP Corporate Treasurer. He attended the ecumenical worship service with the Visayan fisherfolk.

Also present in the service was Welfare Secretary Judy Taguiwalo. She shared that her Department will formulate an appropriate response to the demands of the people.

Following the fluvial parade, worship service and solidarity breakfast, they held a conference dubbed on Typhoon Yolanda Response: Rising Up for an Abundant Life” (John10:10).

The efforts by the NCCP with the help of national and international partners have reportedly reached 107 barangays and 18 municipalities in 7 provinces. They have provided various forms of assistance to over a million Yolanda survivors in the past three years.