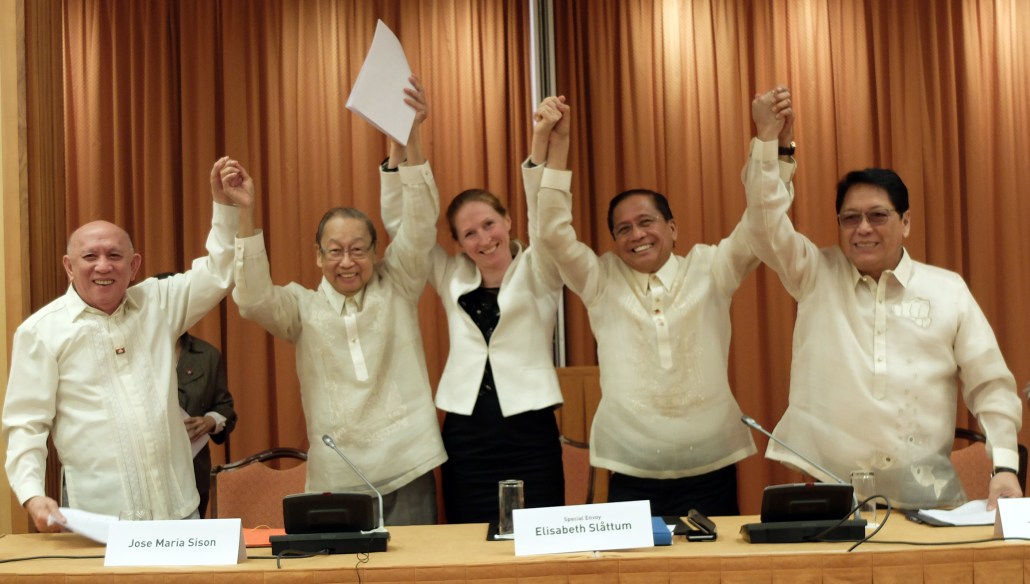 After four days of intense formal negotiations and an extra day of back-channel talks, the parties firmed up their agreement on free land distribution “as a basic principle of genuine agrarian reform.”

NOORDWIJK, The Netherlands—The “difficult and exacting” fourth round of formal talks between the Government of the Republic of the Philippines (GRP) and the National Democratic Front of the Philippines (NDFP) concluded successfully today with significant advances in socio-economic reforms negotiations.

After four days of intense formal negotiations and an extra day of back-channel talks, the parties firmed up their agreement on free land distribution “as a basic principle of genuine agrarian reform.”

“This is the main message of the bilateral meeting of the RWCs-SER (Reciprocal Working Committees-Socioeconomic Reforms) and an achievement of the Fourth Round of Talks,” the parties’ Joint Statement said.

The parties also said the signing of an Agreement on an Interim Joint Ceasefire is a “significant step forward” for a conducive environment for the negotiations and encourage the eventual and early signing of a Comprehensive Agreement on Socioeconomic Reforms (CASER).

The parties reported that the GRP recommended the conditional pardon of 23 NDFP-listed prisoners, including three consultants.

The NDFP and GRP also agreed to undertake measures to immediately and safely release the four remaining New People’s Army captives. Those held in SOCSKSARGEN are to be released before Easter (April 15) and those in Bukidnon and CARAGA after Easter.

Sison then proposed that the RWCs and bilateral teams of the negotiations to start drafting the executive orders and legislative bills to be annexed to the CASER.

“The Genuine Agrarian Reform Bill should be taken into account in making a new land reform law. The priority industries to be established in order to lay the industrial foundation of the Philippine economy should be listed up in consultation with the industrial experts and prospective Filipino investors,” Sison said.

In a separate interview, Sison said the Filipino people should put more faith into the peace process given the important strides made on agrarian reform and rural development.

Sison said he expects the next round for formal talks to begin discussions on national industrialization and economic development.

The parties agreed to meet again in this city on May 26 to June 2 for their fifth round of formal talks. Reposted by