“Where is the change that you promised?”

MANILA – Progressive groups depicted the suffering of destitute Filipinos under the Duterte administration, which, they said, has reneged on many of its promises for change.

On April 10, Holy Monday, members of the urban poor group Kalipunan ng Damayang Mahihirap (Kadamay) and Bagong Alyansang Makabayan-National Capital Region (Bayan-NCR) dramatized what seems to be endless agony of the impoverished, in their annual Kalbaryo ng Maralita (Calvary of the Poor).

“Christs” carried three large crosses, representing the three basic ills of Philippine society – imperialism, feudalism and bureaucrat capitalism – while being whipped by “centurions” symbolizing US President Donald Trump, the Armed Forces of the Philippines and big business. The crosses also symbolized the hardships of the poor, such as extrajudicial killings, militarization of communities, labor contractualization, low wages, rising prices, and inadequate social services.

Kadamay likened President Rodrigo Duterte to Pontius Pilate who “washed his hands amid the killings in the country despite having the power to stop the attacks against the people.”

“Duterte vowed to end Endo (end of contract), but Endo is still very much alive in workplaces. Duterte vowed to uplift the conditions of the poor, but the poor became prime targets of the government’s bloody ‘war on drugs.’ Duterte promised change but his government didn’t reverse the anti-people and anti-poor economic policies of his predecessors,” said Mark Louie Aquino of Bayan-NCR.

Protesters marched from Plaza Miranda in Quiapo to Chino Roces Bridge, near Malacañang, the Presidential Palace.

Lumad groups from Mindanao also joined the protest, as they call for the pullout of military troops from their countryside communities.

The urban poor continue to be deprived of their right to free mass housing, social services and decent livelihood. Kadamay Manila secretary general Jerome Pagunsan said the local government of Manila has been clearing vendors all over Manila due to joint venture agreements with the business sector.

He said vendors and homeless in Malate and Roxas Boulevard are being arrested by the police.

“Vendors are also being evicted from their houses because they cannot pay rent anymore. They have lost their source of income,” he said during the program.

Residents of Baseco and Parola in Tondo, Manila face threats of eviction with the looming construction of Manila Solar City, an approved joint venture project of the Manila government and Manila Goldcoast Development Corporation (MGDC).

“This is not the change we want,” Pagunsan said. 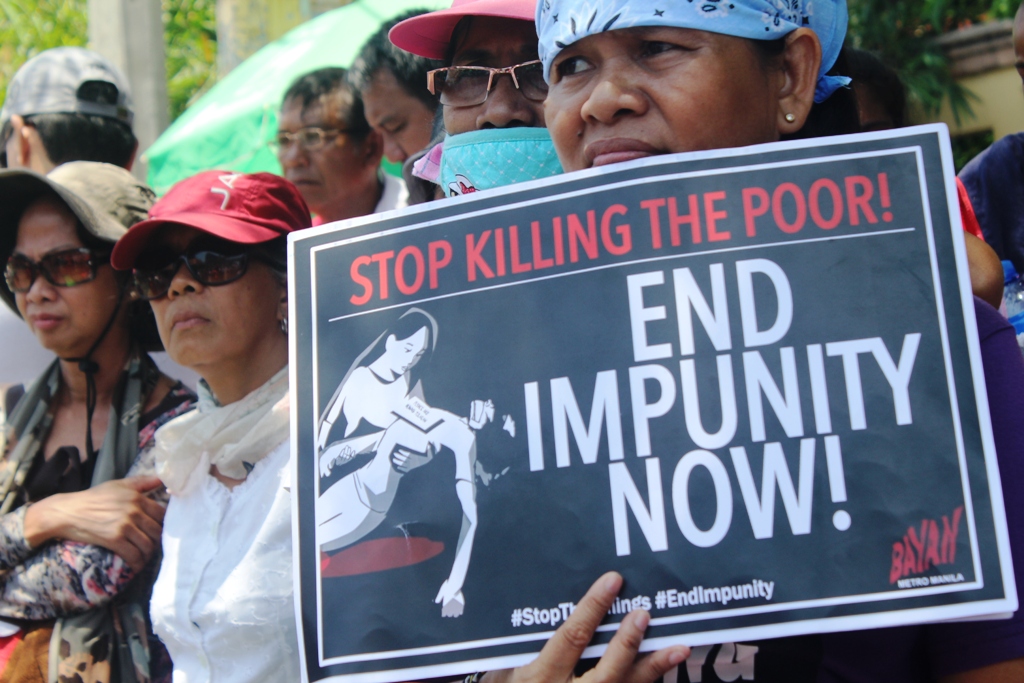 Mong Palatino, Bayan-NCR chairperson, meanwhile said imperialism, bureaucrat capitalism and feudalism are the “calvaries” of the poor, the plagues of society. Land grabbing for corporate interests and the flexibilization of labor are the policies that whip the poor hard making their life miserable. For almost a year, he said, the Duterte administration has people asking, “Where is the change that you promised?”

He challenged Duterte to revisit all his campaign promises and make significant reforms for the Filipino people.