Cordillera Day 2017: Still for the defense of the right to land and self-determination

A 77-year old Igorot woman wondered aloud why the military was always checking on them as if it had not been informed beforehand of the Cordillera Day commemoration.

Tabuk, KALINGA — About 50 men with placards proclaiming love for the CAFGU (Civilian Armed Defense Geographical Unit) turned out to be the last obstacle the participants of the 33rd Cordillera Day dealt with to smoothly hold a program against militarization. They held a rally in front of the headquarters of the Philippine Army’s 503rd Infantry (star) division.

On April 25 at Bgy. Calanan, they successfully moved their caravan along despite the hitches of having to answer to questioning at military checkpoints along the road. A 77-year old Igorot woman wondered aloud why the military was always checking on them as if it had not been duly informed of the Cordillera Day commemoration.

From the venue of the Cordillera Day gathering in Balbalan, Kalinga, the caravan passed through several military checkpoints. Also, at nearly every waiting shed from there on, there were fully armed soldiers.

Aside from being stalled by questioning at checkpoints, the caravan of Cordillera day protesters suffered delays with their vehicles. The tires of the first three vehicles full of participants, and the tires of one minibus, gave out one after another. Investigation showed the tires had been punctured with nail spikes, some of it were still littering the road. Those with still intact tires went ahead to the scheduled protest at Tabuk, where, near the entrance to the Philippine Army headquarters, those 50 or so lovers of “handsome CAFGU” stood on the road, apparently waiting for the rally of the Cordillera Day participants to start.

The CAFGU supporters marched and positioned themselves at the entrance to the Philippine Army headquarters. They tried to chant down the Cordillera Day program happening across the road. Fully armed soldiers, meanwhile, manned the nearby intersection and the traffic. Their combined presence did not deter the Cordillera Day participants. On the contrary, some of them marched right in front of the CAFGU lovers and occupied the entrance to the headquarters of the Philippine Army in Tabuk, explaining to the CAFGU supporters that they should not have been at war with each other as both are at the receiving end of repression and exploitation of big capitalists with the aid of government troops.

The CAFGU “lovers” listened to the program for some time. They stopped chanting but played the pattong (brass gong) from time to time before exiting to the direction of the Philippine Army headquarters. Their exit drew cheers from the Cordillera Day participants as they proceeded with their protest action.

The 33rd Cordillera Day, attended by about three thousand people from the region and other parts of the country plus friends abroad, had just wrapped up its main program the day before their protest at the army headquarters. Among their unities is the vow to campaign for the pullout of military and paramilitary groups from their communities. It is a requirement for promoting peace and respecting their right to self-determination, they said, as borne out by their experience.

The Cordillera Day itself arose from the popular struggles against the Chico Dam that began in the 70s when the Marcos dictatorship tried to force the mostly indigenous people to submit to the building of the World Bank-funded dam. The project martyred many tribespeoples in the Cordillera, but united and strengthened their resolve to resist.

According to the Cordillera People’s Alliance (CPA), they had exhausted all legal processes to defend their ancestral land and the river and opposed the dam project, but all these were just ignored by the authorities. As such, they said, their members resorted to armed struggle. In fact, they ascribed to armed struggle and the support of communist-led New People’s Army the success of their campaign in frustrating the anti-people mega dam project.

Today, the CPA said in a statement, the need to defend their land and right to self-determination continues.


“We are here protesting (in front of Philippine Army’s 503rd Infantry Division headquarters) to show our support to the calls for pullout of CAFGUs and military from civilian communities,” Geraldine Cacho, coordinator of Tontongan ti Umili-Baguio City, an urban chapter of the CPA, told Bulatlat.

Coming from Baguio City, she has seen how militarization results in the uprooting of indigenous families, the sudden loss of everything they’ve known and depended on. And yet, she added, all these military operations are geared not for the people but for securing the projects of big capitalists.

Imelda Tabiando, Secretary General of Cordillera Human Rights Alliance, said, during their protest action, that infantry battalions such as that 503rd are notorious for committing human rights violations. She cited numerous cases of torture and extra-judicial killings victimizing the people of Abra, Ifugao, and Kalinga. She condemned the military’s habit of branding the civilians as NPAs (New People’s Army), bombing their communities, occupying civilian areas within the communities, forcing the locals to point them to the whereabouts of the NPAs, using them as human shield. All of these, Tabiando emphasized, are violations of the international humanitarian laws.

Piya Malayao of Katribu said that all these violence due to military operations have also been happening in other parts of the country. She said that under the Duterte administration, 19 members of national minorities have been killed. She added that the Philippine military has killed and included in its target people who are fighting to defend their land.

“The basis for desiring the pullout of military and paramilitary groups from our communities lies among the thousands that have evacuated recently in fear of being branded or targeted for military attacks,” said Piya Malayao. 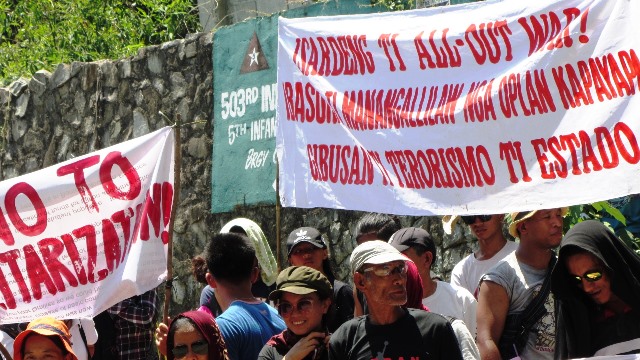 “The 503rd Infantry division is part of the entire state machinery, led by a few ruling elite, controlled by foreign imperialists. And that is why the Armed Forces of the Philippines and the Philippine National Police only work to protect the interest of big bourgeois compradors (big export-import businesses) and landlords,” Malayao said during the CPA protest at 503rd Infantry Division HQ in Kalinga.

Referring to the CAFGU fans’ claims that they are “handsome,” Malayao said that the real handsomeness is found among those who serve the interest of the people and not of the few. “Those who give their lives in service of the people are remembered and cherished far longer and in more places,” Malayao said.

The CPA concluded their protest action with messages of thanks to those who supported their calls for defense of the land, and even the CAFGU fans or the military who remained to listen, said Windel Bolinget of CPA. They urged the Cordillera people to “rally behind the call for national freedom, genuine democracy and self-determination.”