No decent paying jobs for working women in the Philippines

Most women land jobs with low salaries and no security.

SIDEBAR STORY: They work hard for the money, but are never treated right

MANILA — Low job quality, lack of job security, and worsening working conditions have plagued Filipino women workers for the past three decades under the neoliberal framework adopted by the different administrations.

A study released by the research institute Center for Women’s Resources (CWR) in March entitled, “Promises unfulfilled, change unperceived: A country report on Filipino women in the time of neoliberalism,” showed that the implementation of neoliberal policies in the Philippines has given less chance of a better life for Filipino women and their families.

The report cited the data of Philippine Statistics Authority (PSA), which said that one out of four Filipinos is poor. National poverty incidence has not reduced significantly, from 27.9 percent in 2012 to 26.3 percent in 2015. It is much worse in the provinces where seven out of 10 are considered poor, such as in Lanao del Sur. Half of the population in Maguindanao, Northern Samar, Saranggani, Sulu, Bukidnon and Zamboanga del Norte, are considered living below the poverty line.

Neoliberalism has resulted to policies such as privatization of public services, flexibilization of labor and liberalized trade and investments. The study gathered data since 1970s up to 2016 to look into women’s conditions in the past three decades.

No decent wages for women

Most women land jobs with low salaries and no security. The study showed that seven out of 10 women or 71 percent are employed in the services sector, 10 percent in industry and 18.9 percent in agriculture.

“One reason for the underperformance among women in agriculture is the trend to look for alternative sources of income outside agricultural production work due to the deteriorating condition of peasant families,” the study read.

Meanwhile, women wage workers are mostly employed in industries with lower wages such as in wholesale and retail trade, manufacturing, agriculture and those who are employed in private households.

The manufacturing industry has a relatively high number of women wage workers at more than a million. The study said they can be found in computers and peripheral equipment and accessories (80 percent); consumer electronics (79 percent); measuring, testing, navigating and control equipment, watches and clocks (72 percent); wearing apparel, except fur apparel (72 percent); and electronic components (70 percent). Products of these industries are geared for exports. They are mostly operating in special economic zones especially electronics and garments that are located in the regions such as Calabarzon and Central Luzon. “Because of regional wage rationalization, most women in manufacturing receive low wages, on the average, P337 (less than $7).”

Women workers in wholesale and retail trade or those working in malls and supermarkets receive the same low wage of P302 ($6) per day. At least 43 percent of the workers in the wholesale and retail trade are also non-regular workers. This despite the increasing profit for mall owners, like Henry Sy (SM Supermalls), the Ayalas (Ayala Malls) and the Gokongweis (Robinson Malls).

The study said SM Retail’s profit has increased by seven percent with total revenue of P276.5 billion ($5.5 billion). It also expanded to 2,110 stores by end-December 2016.

There is also what they call “other services activities” comprising 1.8 million of women workers. At least 89 percent of them are employed in private households. They also receive low wages, for as low as P2,500 ($50) a month, as mandated by the Kasambahay Law of 2012 – much lower than the mandated minimum wage in the country.

“They can also be subjected to verbal, physical, and sexual abuse due to the private nature of their work,” the study read.

There is also a rise in hiring of non-regular workers in past years. The PSA data showed that 1.33 million workers are considered non-regular employees, whose growth rate is at 16 percent (2012-2014), the study read. 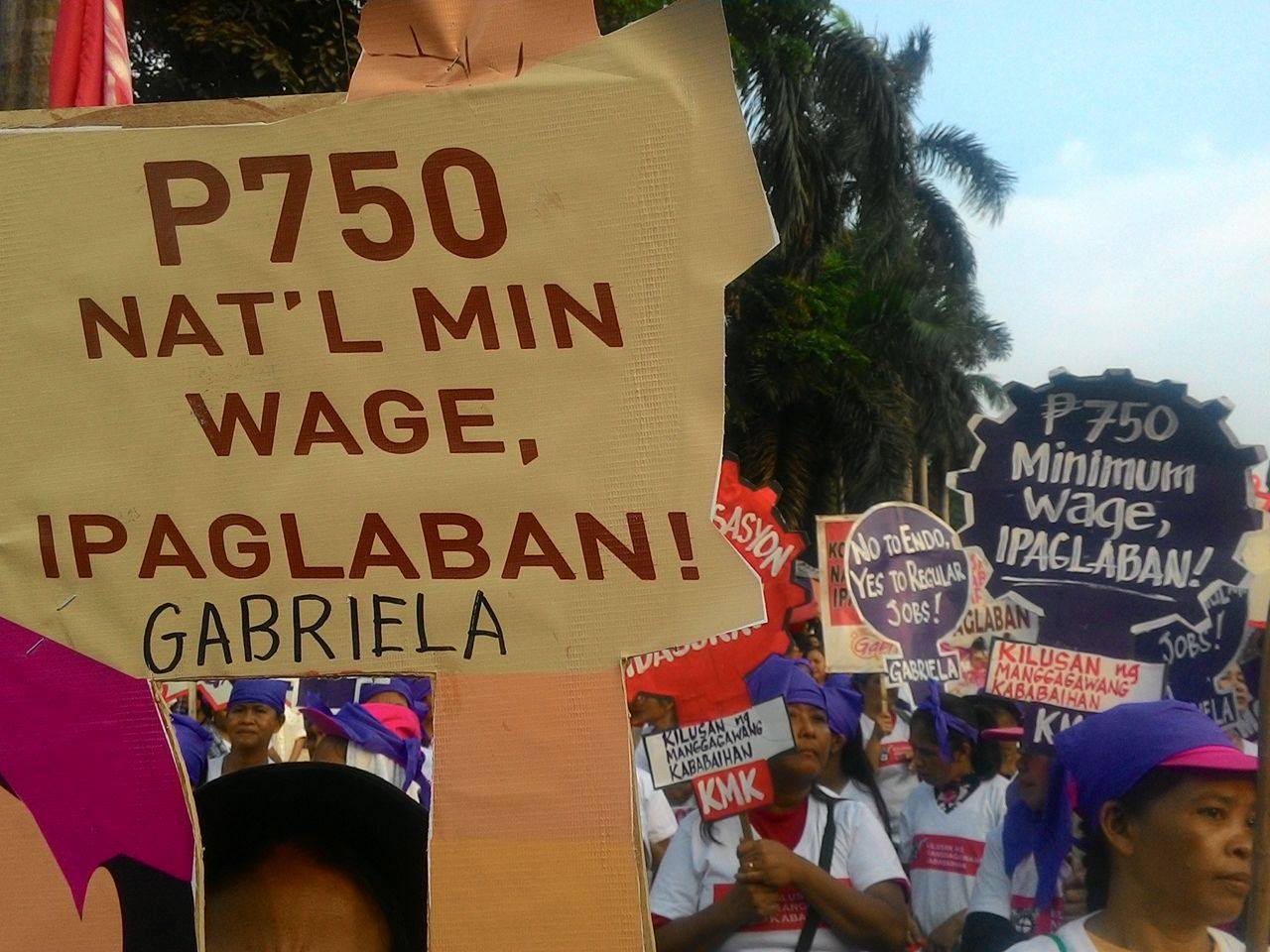 Most workers in export processing zones (EPZs) are also contractuals. In Southern Tagalog region alone, the study said, 65 percent to 70 percent of the workers are contractuals.

“Since EPZs are designed to attract foreign investors, they are given a free hand on labor standards and policies. Thus in EPZs, different schemes of contractualization are practiced, cheap labor remains unchecked, and the right to form independent unions has been curtailed,” the study read.

According to an initial research by CWR, women who engage in subcontract work are those who cannot get a regular job due to age limits and tedious job application requirements. They earn very little as they are paid either by piece or pakyawan. CWR said that in Marikina, women only get P7 up to P18 (14 to 36 US cents) per pair of hand-sewn shoes. Meanwhile, their finished products are sold in the shopping malls at P1,500 ($30) to P2,500 ($50) per pair.

The lack of secure jobs and decent salaries here in the country is forcing Filipinos to find better paying jobs abroad. The government is even promoting it by posting jobs available in other countries, mostly as domestic workers, caregivers and even nurses.

Citing data from the Philippine Overseas Employment Administration (POEA), the study said the number of Filipinos leaving the country for jobs overseas has noticeably increased: from 14,366 OFWs (both new hires and rehires) in 1972, to 1.8 million in 2015.

“This means that 5,053 Filipinos leave every day to work abroad,” the study read. The study said that on the average, six out of 10 OFWs are women.

Like women employed here in the Philippines, majority of the female migrants or 76 percent work as service workers. There is also gendered division of employment in overseas employment, as women are mostly employed in household service, caregiving, cleaning, and nursing occupations, while men are employed in trade and service occupations.

Women who are employed in household services receive low wages because many countries do not include domestic workers in statutory minimum wage. For one, the minimum wage in Hong Kong is set at HK $32.5 (US $4.19) per hour but domestic workers receive lower than that, on the average at HK $15.10 (US $1.95) per hour. According to the PSA 2010 data, 98 percent (28,154) of deployed overseas Filipinos in Hong Kong are female domestic helpers and other related household workers.

But even with their meager wages, the study said OFWs massive number contributes the largest remittance to the country’s economy. “A big share (21%) of the total P29.2 billion ($578 million) remittances (BSP,2015) come from the OFWs categorized as laborers and unskilled, who are mostly women domestic workers,” the study read.

Is change underway under the Duterte administration?

The CWR said that this may be far from happening, especially when his 10-point socio-economic agenda is not really different from the past administrations.

In fact, the study said it is a continuation of the same policy afflicting Filipino women.

“With the Duterte government’s 10-point socioeconomic agenda, women could hardly see a change in their semi-slave condition. With the same economic backdrop as his predecessors, President Duterte will expect the same call from women – regular jobs and decent wages, genuine agrarian reform, peace based on justice, and genuine freedom,” the study read.