“Support may also be by means of volunteer work, donations or fund raising activities.”

MANILA – Various child rights groups and advocates signified their support to the people affected by military clashes in Marawi City, especially children, as they pledged to raise support for relief aid and other assistance for victims in the worsening crisis.

The forum, “Impact of Marawi Crisis and Martial Law to Mindanaoan Children” was organized by Salinlahi Alliance of Children’s Concern on Wednesday, July 5.

School organizations and individuals pledged to continue to disseminate information about the plight of families who were driven out of their homes because of terror. Some also offered to volunteer to the next humanitarian mission to Marawi City, while others pledge to organize donation drives.

Madella Santiago of the Association for the Rights of Children in Southeast Asia (Arcsea) said it is important that support to the children of Marawi continues especially that martial law in Mindanao is far from over.

“Support may also be by means of volunteer work, donations or fund raising activities,” she said. Information dissemination about the condition of those affected would also be a big help, she said.

In response, students from Novaliches High School and J.P. Laurel High School said they will organize donation drives. Psychology students of Kalayaan College volunteered to join in the next humanitarian mission.

Cindy Gealogo, a professor of Kalayaan College and the Philippine representative to the Asean Commission on the Promotion and Protection of the Rights of Women and Children, also pledged to relay the plight of children of Marawi in the Asean. She also volunteered as provider of psychosocial first aid.

In the forum, the delegates of the National Interfaith and Humanitarian Mission (NIHM) held on June 13 to 16 in Lanao del Sur and Maguindanao reported the condition of women and children in the evacuation centers.

Arcsea’s Santiago said that while there is no certainty on when martial law will be lifted, women and children will continue to bear the brunt brought about by clashes between government troops and the Dawla Islamiyah group in Marawi City. The affected population in the city and nearby areas become increasingly in need of assistance.

Eilek Manano, deputy director of Children’s Rehabilitation Center (CRC) said the effects on children would become deeper and more serious if the conflict takes even longer than the 60 days duration of martial law as provided by the Constitution.

Disruption of sleep brought about by airstrikes or discomfort in the evacuation center take toll on children’s health. Prolonged boredom and unproductiveness may also affect children’s development. Children who are idle for a longer time are vulnerable to be influenced by bad habits, like criminality or may lose interest in school. Sadness may also lead to depression, or anger to vengefulness; both will have long term effects on children. She said these are extreme possibilities as the conflict drags on.

Manano said children, who comprise half of the population of Marawi, have been suffering from poverty even before the conflict erupted, and now their poverty is aggravated.

“Imagine how children strive to live in poverty. Now they are in a more dreadful condition,” Manano said.

If the conflict will not end soon, she said, the children’s psychosocial condition will worsen.

Eule Rico Bonganay, Salinlahi Secretary General, said there is a need to continue the psychosocial intervention to the children and their families in Marawi, said. He said the psychological effects of martial law is as big as the massive destruction caused by airstrikes by government troops. He said there are definitely more children and adults who are in need of psychosocial first aid.

Cham Perez, senior researcher of the Center for Women’s Resources (CWR) said the crisis of Marawi has pushed women to dire poverty. She said women they interviewed during the mission lament about loss of livelihood.

“One laundrywoman said that she could not wash clothes anymore because people in the evacuation center had nothing to pay her. They are anxious about the kind of life they will have once the crisis is over in Marawi,” she said.

Perez said many families immediately fled from their houses when the clashes broke out in the city. Many of them had no money with them when they left their houses.

After more than a month in the crowded evacuation centers, women evacuees were afflicted with urinary tract infection, diarrhea, coughs and colds.

Lack of adequate toilets force women to hold their pee because of the long queues in the limited toilets.

Nutritional problems were also noted by the mission. Perez said this is due to consuming mainly relief goods that are canned goods, and lactating mothers barely get fresh and nourishing food.

Pregnant women also have no access to maternity check-up and they worry how they would deliver their baby in the evacuation center.

Women’s mental health is also affected as they continue to be traumatized by the sound of gunshots and aerial bombings, and the haze that follows every time bombs are dropped in nearby areas. Many are distressed.

“Women, especially mothers are feeling miserable because their children cannot go to school or live a normal life. Some even have relatives that died because of the conflict,” she said. 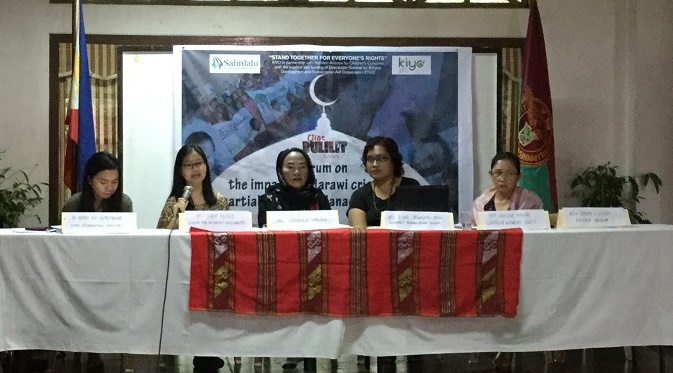 Mothers also bear the brunt of hardships living in the evacuation center, as they face difficulties doing their chores, such as washing their clothes and preparing food.

Perez also said women verbalized their fear of Duterte’s rape jokes. She said some residents do not want to leave their houses when the conflict erupted for fear that soldiers would rape their daughters, but were eventually forced to do so.

“That is why young girls and women were the ones who were immediately evacuated because they remembered the President’s rape joke,” said Reyes.

Gabriela Women’s Party Rep. Arlene Brosas said threats of rape by soldiers are real. She said women victims were the ones who came forward to the NIHM and gave affidavits about being threatened to be raped by soldiers.

Brosas said abuses committed by the Dawlah Islamiyah led by the Maute brothers were not reflected in their report because they did not get to talk to victims inside besieged Marawi city. The military barred the NIHM from entering the provincial capitol.

She said abuses against women, whether committed by government troops or the other side, are condemnable.

“The government cannot deny these abuses because it was what we have gathered on the ground,” she said.