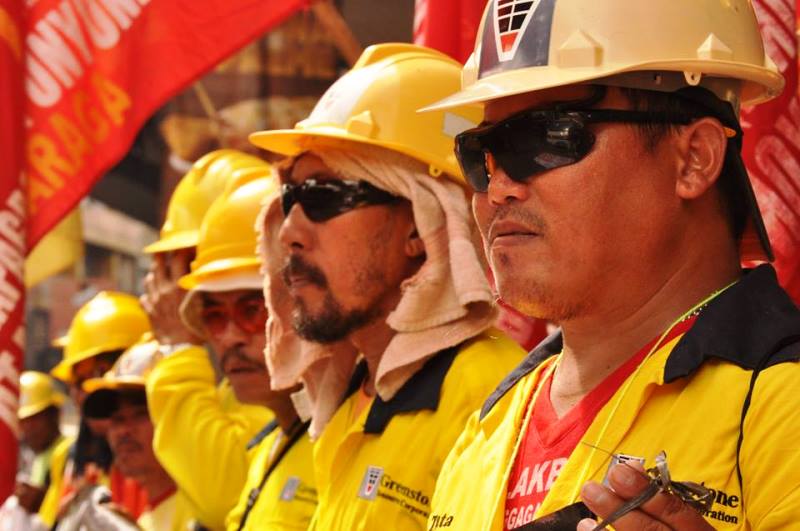 ‘Mine companies let workers’ families starve while they rake in huge profits. The workers’ plight has taken a turn for the worse under Martial Law in Mindanao, given its assault on their right to express legitimate demands, form an assembly, and hold strikes.’

MANILA – “As long as you’re hard-working and not too choosy, there are plenty of jobs.” Dioschar Patagan, 46, holds this optimistic view of job prospects in the country. But even he draws the line between allowing contractualization schemes to go unchallenged or pursuing workers’ rights and President Duterte’s promises. The fine arts undergrad and former village councilor has worked for over five years as a regular worker, then for over three years as a “project-based” worker in the same company, the Australian-listed Redfive Limited.

On July 10, Patagan was one of the mining workers from Caraga who arrived in Manila and set up camp in front of the Department of Labor and Employment. They came prepared for a campout until the president’s State of the Nation Address three weeks from now.

They constructed a long, narrow shelter of wood and bamboo-supported tent on the meter-wide sidewalk across the headquarters of the labor department at Intramuros, Manila. They came with poles of bamboo and wood, tarp for roofing, a heavy-duty gas stove, vegetables, yards of white cloth and tins of red paint for making their streamers from Day 1 of this campout to days of trooping to their employers’ headquarters and the Duterte administration’s labor officials.

Their immediate demands: regularization of mine workers in Caraga region, and reinstatement of those terminated by mining companies on dubious grounds.

The campout of largely skilled, experienced mine workers is a first in recent memory and under the Duterte administration. Its participants admit that it is a sacrifice for them – they had to part for some time with their families in Caraga. But, as one of the workers told Bulatlat, “I have no money now, but it would be even worse if I won’t fight for my job, like this.” He has also worked for years in Australian-owned Redfive gold mining operation in Caraga, but he was terminated last January amid news in their village that the mining company is intent on intensifying contractualization. He said local politicians told them the large-scale mining operators are intent on busting unions and replacing regular workers with agency-hired workers.

Amid the drive for intensifying contractualization, Redfive is transitioning to long-term underground mining operations. Redfive is just one of the large-scale mining companies with workers in the campout.

“There are 23 giant mining corporations operating in Caraga region with boasts of generating employment. The truth is, 85% of their mining workers are contractuals,” said Rey Cagomoc, spokesperson of KILOS NA Manggagawa, at the start of the mine workers’ campout.

The workers’ campout is called “kamPOBREro.” It is organized by Kilusang Mayo Uno and its regional chapters, KILOS NA Manggagawa and All Workers Unity. Organizers said it will be in front of DOLE until July 16, and then in front of the Presidential Palace from July 17 up to the day of Duterte’s SONA. It will include a series of mass filing for regularization from July 10 to 21, a public presentation of workers’ seven demands on July 17 and a nationwide protest on July 21.

They are also expecting to hold dialogues with Labor Sec. Silvestre Bello III.

The workers opted to bring their issue and demands to Manila saying they are fed up with months of fruitless waiting at the regional and local offices of the labor department. Skilled mine workers from at least five large-scale mines in Caraga have representatives in the campout.

Antonio Pascual, secretary-general of the Kilusang Mayo Uno-affiliated National Federation of Labor Unions (NAFLU-KMU), told Bulatlat that the workers’ campout has just grounds. “President Duterte promised to end contractualization, but so far, we haven’t seen or felt any substantial regularization of contractual workers,” he said.

Workers allied with NAFLU questioned the labor department’s report of tens of thousands of regularized workers. There has been no regularization of workers among their ranks or among the masses of workers in their communities, said Pascual. He knew of some contractuals or non-regular who became regular in the past year, but he said it happened because they have fought for it through collective action, and not because of the labor department.

Jacinto Tanduyan, secretary general of KMU-Caraga, branded as a lie the labor department report on 70,000 regularized workers. “In DOLE Caraga region alone, they have declared as regulars the total workforce of companies especially in the mining industry where almost 90% are contractual workers under labor contracting agencies,” he said.

Tanduyan cited as an example the case in the Hinatuan Mining Corporation where the DOLE-Caraga declared the 1,827 total workforce as regulars while the actual number of directly-hired regular workers are only 89 and the rest of the workforce are hired under labor contracting agencies.

In Manila, Rey Cagomoc of KilosNa Manggagawa described the mine employers as inhumane. “They let workers’ families starve while they rake in huge profits,” he said.

Cagomoc said the workers’ plight becomes even worse under the Martial Law in Mindanao as workers reported attacks on their right to express legitimate demands, form an assembly and hold strikes.”

They expect workers from other industries to join the campout in the coming days. The workers said they will stay there as long as they can until actions are taken by President Duterte and DOLE to address contractualization and Martial Law.