MANILA – The infamous drug-related killing of a Grade 11 student in Caloocan City has broken the internet with grief and uproar. 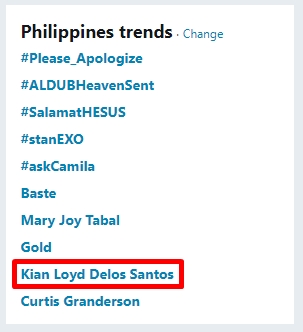 17-year-old Kian Loyd delos Santos was killed a few days ago, adding to the increasing bloody statistics of President Duterte’s war on drugs. Kian, the police said, fired at the cops, which compelled them to return fire.

Witnesses, however, belied the claims of the cops, saying that the victim was handed a gun, told to fire it and run before Kian was peppered with bullets. A 13-year-old witness even saw Kian pleading to the police while being punched and slapped to stop because he still has an examination the following day. A CCTV footage also revealed a young man being dragged away by cops in plainclothes to the same spot where Kian was found dead.

In their posts, Filipino netizens have expressed their doubts over the same-old “nanlaban” narrative of the police who claimed that the slain Grade 11 student resisted arrest and fired at the cops. They are demanding that justice be served for Kian.

What is the PNP's definition of nanlaban? Nangurot?
Grade 11 was caught on CCTV being dragged by 2 policemen. No resistance.#JusticeForKian pic.twitter.com/LJq7wpDZDt

You're gone but not forgotten. Blood in their hands. ? #JusticeForKian

Due process for the rich
Bullet for the poor.

Ppl are getting frantic about bird flu when there are other ANIMALS scarier out there. For example, the PHL policemen. #JusticeForKian

Innocents die while drug lords are free, protected & make money off the poor's misery. Where's the sense in this drug war? #JusticeForKian!!

Filipino netizens also decried how Kian’s dream was cut off by the very same people he dreamed of becoming one someday. Kian, they said, could be anyone you know – “your brother, your son, your nephew, your cousin, your grandson, your friend,” one netizen said.

Kian can be anything he wants to be, a doctor or an engineer. But Duterte reduced him to a mere statistic. #JusticeForKian pic.twitter.com/01BVS1Zi72

Imagine Kian Delos Santos was your brother, your son, your nephew, your cousin, your grandson, your friend.#JusticeForKian#StopTheKillings

I have a lot of dreams for my daughter. But honestly now, I only wish she'd be alive and well by the time she is 17. #JusticeForKian

Meanwhile, some Filipino netizens recalled what they were doing at the age of 17.

At 17, I'm thinking how I can survive engg

Kian at 17 can no longer aspire, dream, hope & plan things he wants for his life#JusticeForKian

At 17, I cried for failing a quiz.
At 17, Kian Delos Santos cried for his life.#JusticeForKian

In a Facebook post, lawyer Maria Sol Taule said she had an opportunity to meet the grieving parents of Kian.

“Do you think my son is a drug addict? He is just starting to grow his mustache. He would bring rice to school and would ask his classmates for viand. When he goes home at night, he would bring me some siomai. He was a very sweet kid,” Kian’s father Saldy was quoted as saying in Saule’s post.