You Are Here: Home → 2017 → August → 30 → 2nd Lakbayan of national minorities to protest killings, other attacks 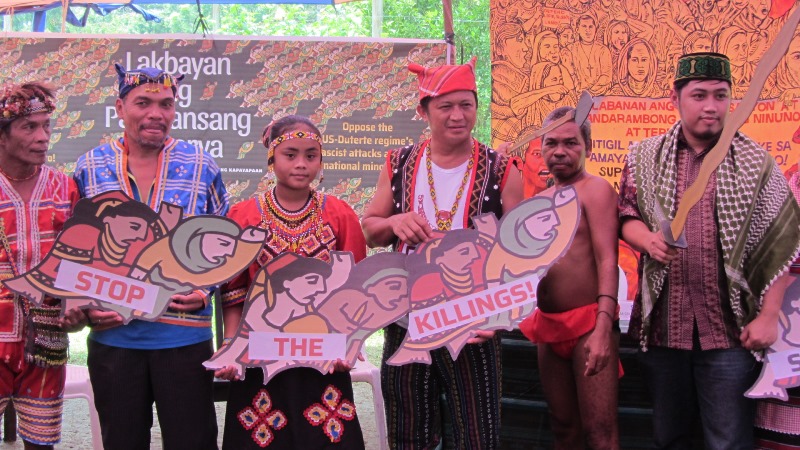 MANILA – There are no CCTVs to disclose the shocking things happening in the far-flung, resource-rich communities where the national minorities live. But in a press conference yesterday in Quezon City, leaders of national minorities say their people are being killed, their resources being “raped,” their houses and heritage being bombed and their race almost being wiped out.” They said the reasons for the ongoing genocide either get muffled or twisted if or when it reached the news.

“We travel thousands of miles to Metro Manila — for the rest of the nation to hear our cries and resistance,” said Jerome Succor Aba, 24, a Moro Datu and one of the leaders of Sandugo. Speaking at a press conference in UP, he invited the public to support and join the 2017 Lakbayan.

Aba said the Lakbayan is one way for them to assert their right to self-determination. In connection with asserting it, they are condemning the US-Duterte regime and demanding justice for the escalating attacks against their communities, tribes, and schools.

Some 3000 members of Moro and national minorities from the different regions nationwide are set to arrive in Metro Manila on Thursday, August 31. The contingent from Mindanao has begun traveling since August 21. On the way to Manila, they are welcomed and joined by other members of national minorities, such as those from the Visayas, Bicol, and Southern Tagalog.

The delegates from Cordillera and Central Luzon are also in various locations now on the way to their grand salubungan in Manila tomorrow.

The different delegations of national minorities have particular cases of killings and plunder to bring to the national attention.

While in last year’s Lakbayan they had reasons to hope that the then newly installed president was listening to their calls, this year they have seen more than enough reasons to condemn what is shaping up as a fascist US-Duterte regime.

“Just over a year in power, his disregard for the rule of law (‘tirahin na ‘yan’) has resulted in thousands of deaths that make the Ampatuan massacre pale in comparison. The security forces and vigilante groups are emboldened by his words “kill!” This is not to mention the killings of the national minorities that have reached ethnocidal and genocidal proportion without the public’s awareness,” the Sandugo said in a statement.

While in the urban centers the US-Duterte regime’s drug war is killing thousands of poor people in need of rehabilitation rather than violence, in the countryside the regime is killing and harassing ordinary citizens and national minorities in the guise of counter-insurgency or defense of multi-billion investment projects, said Dulphing Ogan. A Blaan from Saranggani, he is the secretary general of Kalumaran, a Mindanao-wide alliance of regional Lumad organizations.

Through the Lakbayan in Metro Manila, the delegation of Bangsamoro and national minorities hope to personally belie what amounts to a steady stream of fake news from the government’s war justification machines. According to Ogan and Aba, the Marawi bombings are ultimately not in response to a debatable number of so-called terrorist, Isis-inspired Mautes. On the contrary, they assert that it is just an excuse for the military (including the US) and big business takeover of the juiciest locations in Marawi. 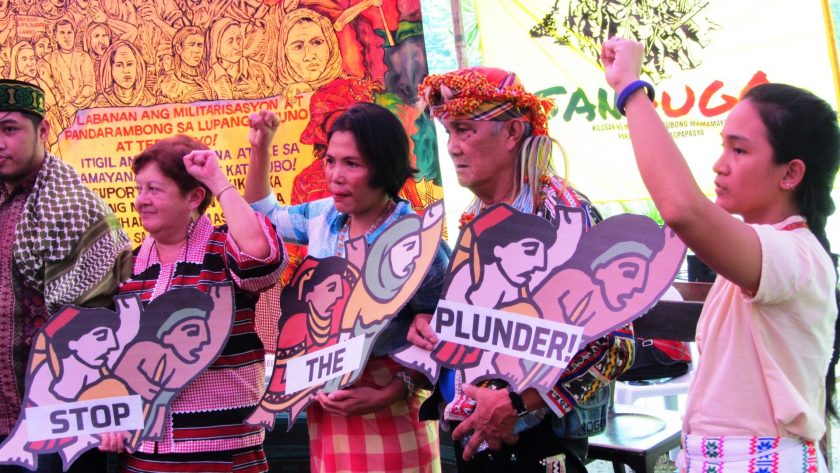 Sandugo said the daily air strikes in Marawi has resulted in thousands of missing Moro who are now feared dead.

“The media coverage of the government troops’ attack on Marawi did not give attention to how the aerial bombings, artillery shellings, indiscriminate firing, assassinations, abductions, and torture have also struck other Moro communities in Lanao del Sur as well as in Lumad communities in Compostela Valley, the Mamanwas in Agusan del Sur, the Blaans in Sarangani Province, the Tingguians in Abra, the Igorots in the Cordilleras, the Mangyans in Mindoro, the Aetas of Central Luzon, the Dumagats of Rizal, etc,” the Sandugo statement read.

Even as alleged fighting continues to break out between the government soldiers and the mysteriously hard-to-kill or count Maute supporters, the government has been facilitating meetings of business groups and assertions from the military over military reservations in the city. Aba of Sandugo finds the planned rehabilitation of Marawi “suspicious.”

“On the former homes of Maranaos that were razed to the ground they plan to erect businesses, infrastructure and military reservations all in the name of Duterte’s BUILD BUILD BUILD, while evacuees languish in evacuation centers and see their dreams of reclaiming their city, their lives, and livelihood slipping further away,” Sandugo said in a statement read at the press conference.

The alliance appealed to the public to support the Lakbayan and their struggle for self-determination. They say the attacks that kill or maim their members are actually part of a scheme for the government and the businesses it has blessed to gain more control over the resource-rich territories and ancestral domain of national minorities.

The representatives of Moro and national minorities in Lakbayan say they are bolstering their unity through the Lakbayan as well as their unity with fellow Filipinos who are not members but supportive of their struggle for self-determination. “We are uniting with fellow Filipinos in opposing the attacks not just in our communities but in all communities of the poor, as we are linked by a bloody trail of extrajudicial killings and other forms of state violence.