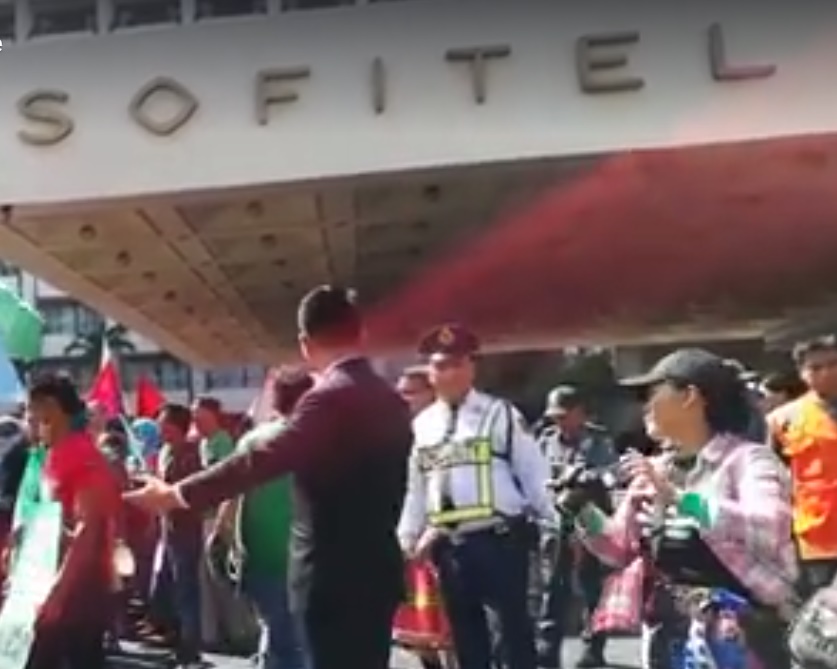 “The indigenous peoples are driven out of their ancestral lands, to hunger, to scarce nutrients and agricultural land for planting food, to thirst as they steadily get deprived of water.”

MANILA — “Indigenous peoples can’t cross or risk contact with the toxic waters of our river especially if they have wounds. Their feet will be poisoned, it will swell and in the end, it may have to be cut off.” This is just one of the experiences of the Aytas with mining-poisoned rivers, which other national minorities shared.

Sonny Serrano, a Magindi-Ayta and leader of Central Luzon Aeta Association, told Bulatlat the resulting injury to their legs is even worse in the closed off parts of the river in the villages of Pili and Aglao in San Marcelino, Zambales. Those rivers have been poisoned after years of mining by Dizon mines.

The loss of pristine waters, which used to flow freely from the mountains and forest reserves, are some of the losses the national minorities within mining sites immediately felt. It makes their life more difficult, it reduces their harvest and worsens their hunger and if this doesn’t drive them away, the harassments of armed troops paid by the mining companies would.

In a study by Katribu, its findings from national minorities’ experiences show that: “The indigenous peoples have suffered negative human rights impacts due to the government’s land deals as it offers the remaining lands and natural resources of indigenous peoples to big businesses like large-scale mining and logging.”

In Palawan, 10 indigenous peoples were recently arrested and jailed in connection with their resistance to mining, Dumagat leader Arnel delos Santos, secretary-general of Southern Tagalog’s indigenous people’s organization called Balatik, told the members of Sandugo during their assembly.

“Our soil is now no longer as fertile. The yield has gone down because the soil is not as nutritious and it lacks water,” a student supporter of Sapakkmi (Samahang Pang-karapatan ng mga Katututbo, Magsasaka at Manggagawa, Inc) said during an earlier conference organized by Katribu in Quezon City with the support of the European Instrument for Democracy and Human Rights.

Like other indigenous peoples, the Ifugao in Nueva Viscaya are chafing at the tightening repression of mining giant Oceana Gold’s security and private army, which, they said, operates checkpoints along their road network.

“They resort to massive repression in response to the massive protest,” said Julie Simongo, an Ifugao and chairperson of Sapakkmi-Didipio Chapter.

On September 6, a delegation of Sandugo, a national alliance of Moro and indigenous peoples currently in the national capital region for a Pambansang Lakbayan (national caravan), joined the environmental activist group Kalikasan People’s Network for the Environment (Kalikasan PNE) in a protest at Sofitel where the ‘Mining Philippines 2017’ Conference of the Chamber of Mines of the Philippines (COMP) was being held.

“This is a conference of plunderers who want to cover up their recently exposed crimes against the people and environment,” said Clemente Bautista, national coordinator of Kalikasan PNE.

The Lakbayan delegation succeeded in marching up to the entrance of the swanky hotel but they were prevented by the beefed up hotel security from getting inside. A small group of mining critics, meanwhile, donned business suits and shouted anti-mining slogans right inside the hotel lobby. But they were also forced out of the hotel.

A tale of conflicting dreams, nightmare: mining profit and destruction

The business interests behind the mining industry use a bunch of keywords for promoting large-scale mining. They call it “development” projects and cluster it to Filipino dreams such as “education and scholarship,” jobs, “being responsible,” “corporate social responsibility,” among other positive sounding assurances. The indigenous peoples marched to belie these, bringings with them numerous documented cases.

Some of the mining stakeholders had to be rerouted due to the protest. The COMP leaders maintained it is business as usual but the hotel security had to barricade the main entrance of Sofitel to prevent the Sandugo’s Lakbayan from marching inside.

In interviews with reporters, the newly elected head of COMP challenged President Duterte to visit Nickel Asia and Lepanto which he said are doing a good job. He cited the opening performance of the students of the Lepanto National High School in their conference like an endorsement of the miners’ relationship with the mining-affected communities.

But for Dulping Ogan, a Blaan from Saranggani and secretary-general of Kalumaran, a Mindanao-wide alliance of regional lumad organizations, the conflicting interests of these mainly foreign miners and the Filipinos are actually leading to the ethnocide of many national minorities.

“To us, business means killings, violation of human rights,” he once said in reaction to a study on business, human rights, and the indigenous peoples.

“We bear the burden of the impact of the government’s economic policies,” Ogan said. As a result of these businesses such as the multi-billion mining projects of the members of Chamber of Mines, “The indigenous peoples are driven out of their ancestral lands, to hunger, to scarce nutrients and agricultural land for planting food, to thirst as they steadily get deprived of water.”

In Sultan Kudarat, Ogan said, the Dulangan Manobos are all but being killed off by repression and hunger as a result of mining operations of the DMCI. In three municipalities there covered by DMCI’s mining project that was to have expired in 2012, the Dulangan Manobo asserted before all concerned government offices their opposition to the renewal of DMCI’s permit. “But DMCI and the government secretly renewed the permit,” Ogan said.

Meanwhile, in the Manobo lands the tribe reclaimed and planted with food crops, they are being attacked and bulldozed by a combination of DMCI security and government forces. What’s worse, added Ogan, “it is the Dulangan Manobos who are being charged with criminal cases for having reoccupied and tilled their ancestral lands.”

Another big taint of blood from gold and copper mines, he said, is in the Blaan and Tampakan project in Socsksargen. It would displace some 30,000 Blaan people, and on the way to starting commercial operations it had already been the alleged financiers of killers of mining critics.

Business and IP right to self-determination don’t mix, and the environmentalists and IPs highlighted it this Wednesday at Sofitel. Inside the air-conditioned, sweet-smelling, thickly carpeted hotel ballroom, mining executives discussed positive developments in mining. They expressed concerns with the pending (or threat, to them) of increased taxation should the mining laws were revised. In the face of complaints, they formed an oversight committee and said they will police their ranks.

But these are nothing new to the protesting environmentalists and IPs who, in past protests during COMP’s conferences, scoffed at their “responsible mining” claims.

“Duterte should be held accountable to his promise for a new mining law during his last State of the Nation Address,” said Windel Bolinget, an indigenous Kankanaey leader and national council member of Sandugo alliance.

Clarifying that they are not against mining per se, Bolinget said Duterte should endorse the People’s Mining Bill to ensure that mining is serving the people’s needs, and not corporate greed.

“Expect no less than the most ferocious resistance from our communities until then,” ended Bolinget.