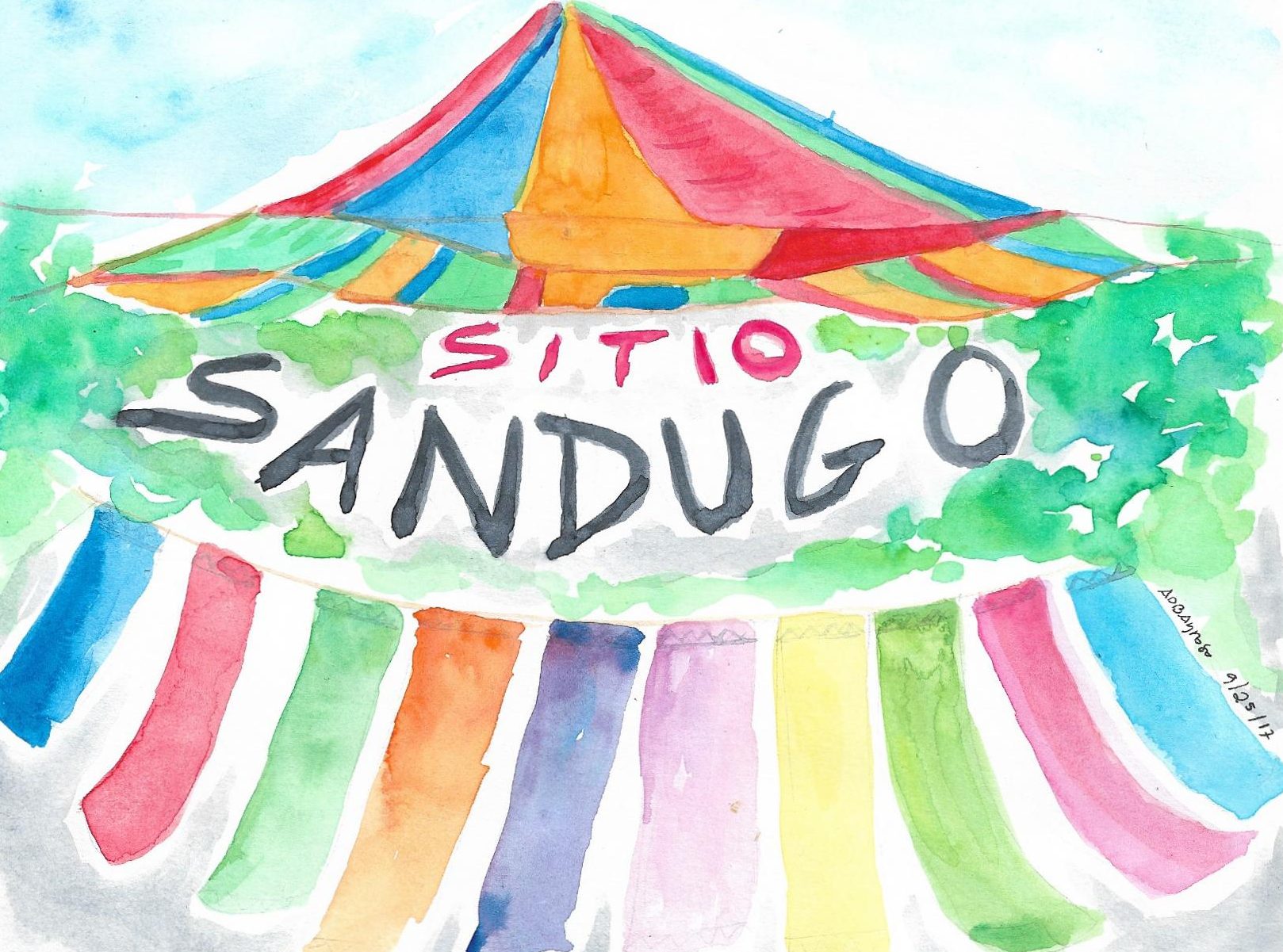 MANILA – I’d like to call it a meeting place, a convergence, even a junction.

Sitio Sandugo, the camp of the Lakbayan ng Pambansang Minorya, was put up along C.P. Garcia avenue at the Old Stud Farm of the University of the Philippines, Diliman from Aug. 31 to Sept. 22. It was the realization of UP’s promise to give a physical base to the national minorities’ alliance, Sandugo, to support their struggle for ancestral lands and self-determination, as well as to help rectify history.

It was my place of destination for stories on this year’s Lakbayan. Having gone to the Manilakbayan/Lakbayan camps in the past three years, I expected to be swamped with more stories than I can write. But it was not just the myriad stories, but the energy of the people, the vibe of the place, which enthralled me and made it another memorable year.

I made friends, received a gift, had precious coffee time with relatives, and learned things I didn’t know about the national minorities.

Oh, it is so much more than a camp.

Sitio Sandugo created a focal point where the Bangsamoro and indigenous peoples meet with the “majority” – Filipinos whose tribal roots were cut and lost in hundreds of years of colonization.

It is also where groups from the north meet those from the south, the east, the west. The old meets the young. The city meets the countryside. The mainstream meets the alternative. Generations combine, and what were in the fringes come together to the center.

With designated sections per region, the place is a virtual portal to the ongoing struggle of national minorities in different places around the country. The Lakbayan delegates, or lakbayanis, share the problems they face in their homes: landgrabbing, destructive mining and energy projects, expansion of plantations, human rights violations, and yes, war.

This year, among the lakbayanis were evacuees from war-torn Marawi city, whose homes and lives were destroyed by the military operations, which go on up to this writing. Their hut was at the far end of the camp, inside the Bangsamoro section. There was also a masjid set up for prayers.

Many of the lakbayanis are victims, and most, if not all, are activists. Naturally, along with their stories of harassment, attacks, death and destruction, are stories of hope and optimism that things will get better – because people unite and act together.

And sitio Sandugo is a perfect example of people’s unity and collective action. Here are more reasons why you should go next year:

It’s a socio-political convention. Discussions were held daily under the giant multi-colored tent which served as a plaza. Sectoral groups took turns leading the forum, on land, LGBT rights, Islamophobia, the nationality question, and even on the agreements signed by government and the National Democratic Front of the Philippines (NDFP). Resource persons come from the academe, the progressives, the sectoral support groups.

It’s one big classroom. Students from UP and various universities streamed in, because sitio Sandugo is a big “school,” with different lecture rooms. UP Chancellor Michael Tan called the lakbayanis the “visiting professors,” as they teach about issues of the Cordillerans, Lumad, Mangyan, Aetas, Dumagats, the Bangsamoro and various other groups.

Visitors learn, not just about the indigenous culture, but mostly about their valiant defense of their ancestral territories throughout history – the main reason why they have preserved their culture and the rich natural resources in their lands, and also why they continue to be subjected to national oppression.

It’s one big art gallery. Various progressive visual artists stayed in and created art in sitio Sandugo. The camp cranked out murals and effigies. Many were burned in the series of Lakbayan protests, still, many were kept and hung around the long huts, and added visual layers to the ethnic hues of black and red, and the green of the foliage around the camp.

Indigenous works of art, such as bead jewelries and woven cloths, were not just worn by lakbayanis, but also sold to visitors.

One can have hours of visual treat, watching the big artworks come together, such as UgatLahi’s “Rody(k)’s Cube,” and the Duterte missile-riding Trump. But smaller works of art were made, not on paper, canvass or wood, but on people’s skin, to the rhythmic tapping sound of the mambabatok (tattoo artist) at work. People queued up to get skin art from Jasmine Adaol from Kalinga, who sat at the back of the Sandugo Museo.

Speaking of Museo, it has evolved from the Museo Lumad, and now showcases products of the Bangsamoro and indigenous peoples: hunting and farming tools, musical instruments, basketry, weapons, and various memorabilia of their struggle. This includes a replica of the marker of three Cordillera heroes built along a Kalinga roadside this year.

There’s a concert every night. Every night was cultural solidarity night. A formidable list of performers mixed mainstream musicians with the alternative. Cultural groups and bands from various UP colleges also took to the stage. Poets, like those from KM 64 and Kamandag, also had their turn.

But the main stars were the regional groups, who performed their songs, dances and skits, that depict their stories as peoples fighting for their land and their rights. My forever favorite is Dap-ayan ti Kultura iti Kordilyera, or DKK.

Just to be clear, the Bangsamoro and indigenous peoples donned their traditional attire and performed songs and dances, NOT to entertain, as government would have them do in front of tourists, but to showcase their centuries-old culture and ways, preserved by their warrior tradition of defense of ancestral lands, which they carry on to the present day, and to which they enjoin people to support.

I mean, the whole context is their continuing struggle, not some tourism gimmick. The tribal war dance is not just for show.

It’s one big healing center. Lakbayanis and visitors alike were given treatments in acupuncture, acupressure, hilot or traditional massage, and Western medicine. Progressive health workers set up and maintained a clinic inside the camp, where many health professionals volunteered and gave medical assistance to the delegates.

Now, if only they had a psych section…er, someone I know needs to get checked.

There’s an impromptu reunion waiting to happen. Old friends and colleagues unexpectedly found themselves collected in one place. It was a place to catch up on former co-workers and their family, former activists who came to give support to the growing strength of national minorities.

Case in point was a meet-up of indigenous rights activists from the 80s, now all middle-aged. Among them was a daughter of their colleague, Mikmik, who took the place of her late mother, pioneering Dumagat leader, Marilyn Quierrez. Along with Mikmik was her eight-month-old son, Lenin, hopefully, their third generation of activist.

Another case in point: Among the Cordilleran lakbayanis were my aunt, a cousin and a nephew whom I have not seen in years! And they do compose three generations of activists.

I think no one leaves sitio Sandugo without taking something from the camp, whether it’s a pair of beaded earrings, a tubaw, a selfie by the standees, a sip of coffee from a coconut shell, a book, a new friend. A heart-wrenching story. Searing pain from a tattoo. Maybe, even a new direction in life.

Sitio Sandugo is a place of fusion, where various indigenous peoples groups converge, along with the Bangsamoro, non-tribals, each acquiring a positive aspect from the others as they flow together stronger towards a new direction, like a river coursing from a junction.

So, next time, make it a date. It’s best to come as a group, with friends, colleagues. Bring young children.

Until next year, sitio Sandugo!