The Sentinel, truth and fortitude*

In 1997, I took on a challenge and became the editor in chief of the Lyceum Independent Sentinel.

At first, I was a bit uneasy. Back in high school, when I was editor in chief of our student paper, there was a reliable adviser who guided us. At the Sentinel, we had no faculty adviser. We planned, wrote and critiqued our own stories.

We spent sleepless nights during press work. We had no computers but an old school typewriter. We edited, proofread our stories on paper. We did the literal cut-and-paste layout of our eight-page, sometimes, 12-page student publication. Usually at dawn, we would go to the printing press of then The Manila Standard located near the pier, wait for the finished layout and proofread the ‘camera-ready’ print once again before printing.

The smell of newspaper remains distinct in my memory. It filled us with a sense of accomplishment.

The process taught us persistence and patience. Most of us were scholars and leaders of other student organizations but we somehow managed to juggle everything. Each day, I was more excited working for the Sentinel than attending classes.

Being at the Sentinel also taught us respect and humility. The editors strived to maintain the style and spirit of original drafts. At the same time, we learned how not to be onion-skinned when colleagues filled our drafts with red marks.

As campus journalists, we valued and stood for the principles of journalism.

This was tested when we published a banner story stating that the Lyceum had zero passing rate in CPA examinations for three consecutive years. Our reporter Joan J. Lozada verified the information from the Professional Regulatory Commission.

The 10,000 copies of the said issue vanished in a few hours. One of the deans barged into our office and tore The Sentinel into bits. The dean of student affairs threatened us with closure. 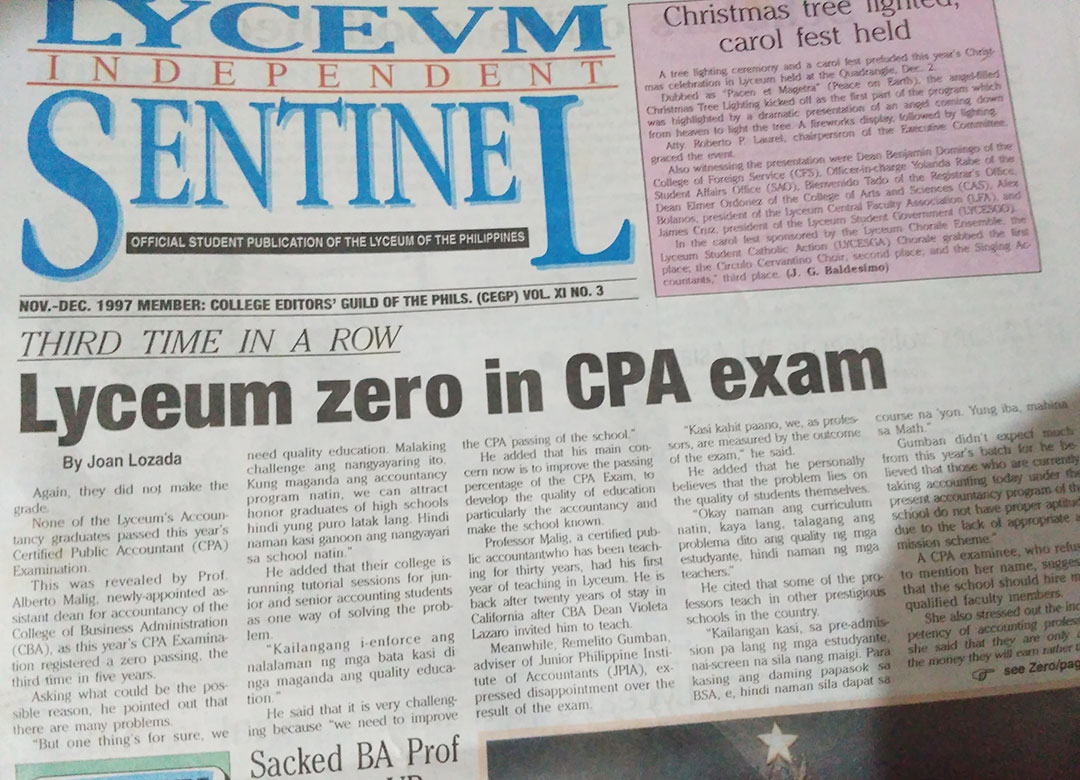 The next day, all the editors and staff held a meeting at Fort Santiago. Away from any intimidation and tension, we discussed all the possible scenarios. We knew we were on the side of the truth and we were ready to defend it.

Days and weeks went by but the administration under the leadership of Sotero H. Laurel did not lock us down. Instead, reforms were initiated to improve the performance of accountancy graduates in licensure examinations.

The following year, the administration proposed a ten-percent tuition increase without enough basis. The Sentinel chronicled every negotiation between the administration and student leaders. I was no longer with the Sentinel at this time (I was then the president of Lyceum Journalism Society) but we used the Sentinel’s office for our meetings with other student organizations and fraternities. Here, we produced leaflets and other campaign materials and planned our next actions.

The campaign against tuition increase culminated in the walkout of thousands of students. The administration backed down from its proposal.

The Sentinel was brave because it stood up for the truth. We drew our courage from our publishers, the students.

Twenty years later, I received news of virtual closure of The Sentinel. The administration stopped collecting publication fee this semester without prior consultation with the students. (See: Lyceum admin undermines student paper’s autonomy)

As I’ve said, the administration has no right to replace The Sentinel. The Sentinel is a publication of, for and by the students. It belongs to the present generation of Lyceans.

To the Lyceans, take on the challenge. Live by Lyceum’s motto, ‘Veritas et fortitudo’ and defend the Sentinel. It is yours. Its destiny is in your hands. Don’t let it die.