You Are Here: Home → 2017 → October → 18 → Farmers slam expansion of plantations under Duterte gov’t

Despite the environmental degradation plantations cause and the harmful toxic chemicals they use, their proclivity for land grabbing and the low wages they pay, the Duterte administration has allocated another 1.6 million hectares for the expansion of plantations.

MANILA – Farmers from at least three regions in Mindanao arrived at the capital for weeks of activities to resolve land issues hounding them to death in their farmlands. They are seeking to stop the aggressive expansion of plantations and mining, which environmentalists also said, are posing dangers to the country’s biodiversity and food security. These farmers are also demanding the implementation of a genuine land reform and the moratorium on conversion of agricultural lands into agribusiness ventures and other land uses. The latter is part of the landmark efforts of former Agrarian Reform Secretary Rafael “Ka Paeng” Mariano but the farmers said it is being sabotaged of late.

Hermie Ambo, 44, a farmer from Bukidnon, is among those who traveled from October 8 to 11 to be in Manila for the peasant month. She’s hoping that after a series of mass actions and other activities under the #Lakbay Magsasaka in the capital, they could go home bearing good news about owning the piece of land they have been tilling for the past three decades now.

Ambo is one of the 100 farmers from the organization Buffalo-Tamaraw-Limus (BTL) in Bukidnon who joined the #Lakbay Magsasaka in Manila. On October 17, amid a nationwide transport strike led by PISTON, Ambo attended a “street conference” at their protest camp-out in front of the Department of Agrarian Reform (DAR) main office in Quezon City. She also linked up arms with fellow peasants to form a human chain shortly before they began the conference. 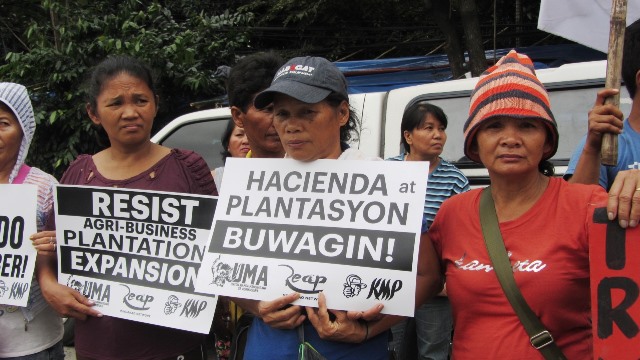 Various peasant organizations are reportedly also launching mass actions all over the country airing their demands as part of #LakbayMagsasaka activities this October.

At the street conference, the camped out peasants shared their experiences and together challenged President Rodrigo Duterte to act favorably on peasant demands for land ownership. They recalled how, at the opening ceremony of the Agrilink/Foodlink/Aqualink 2017, Duterte said: “Vast tracts of lands are being used to produce cash crops for export to other countries, at the expense of food crops for our own people’s needs.”

“If that’s a concern to the president, then he should act favorably on the demand of peasants for owning the lands they have been tilling and counter the expansion of plantations,” the camped out peasants said. The plantations’ expansion, they said, has been encroaching and usurping into the lands they have been farming for years now. With the expansion, they complained of increased deployment of armed troops from or trained by the Armed Forces of the Philippines.

Land conflicts between peasant groups and plantation interests in Bukidnon, Caraga, and Davao mentioned by the peasants include:

Buffalo-Tamaraw-Limus farmer organizations from Bukidnon said in front of DAR that they are here to challenge President Duterte toward respecting the farmers’ right to till the lands. They call on Duterte to distribute 517 hectares of lands presently under legal ownership of Central Mindanao University (CMU) to the historical and actual farmer-tillers of this land.

The BTL farmers once held certificates of land ownership award covering the said lands, but it was canceled by the Supreme Court in 2007, reverting the lands to CMU for “educational and scientific purposes.” The farmers remained on the land through a lease agreement, but the CMU which has been leasing other parts of its lands to plantations is now looking to lease out also the 517 hectares of the BTL peasants. The latter said the multinational companies taking interest in their land include Del Monte and Davao Agricultural Ventures (DAVCO).

Ambo said their leaders have been injured and killed in their three decades of struggle.

From Davao del Norte the Agrarian Reform Beneficiaries One Movement (AOM) challenged President Duterte to return to the farmers the control of 2,276.44 hectares of their lands “usurped” by Rep. Antonio Floirendo Jr. and turned into banana plantations under Tadeco.

Although the said lands have been distributed to the farmers through the Comprehensive Agrarian Reform Program, in practice what they have is basically just a piece of paper. “Floirendo’s Tadeco has control over the said lands,” said REAP, the network Resisting the Expansion of Agricultural Plantations in Mindanao.

Peasants from the CARAGA region shared at the street forum that their region is hosting the second largest hectarage of oil palm in the country, with 17,369 hectares of plantation. Yet, they said, their region remains one of the poorest, showing an almost 40 percent poverty incidence, based on government data. There are moves afoot to further expand the oil palm plantations.

More reasons to push back the plantations

When a plantation expands land coverage, not only does it encroach on farmlands and threaten the livelihood of poor peasants, it also expands a host of other problems, which eventually victimize the poor peasants and the ordinary people the worse.

Gianina Clarino, public health researcher of the Kalikasan People’s Network for the Environment, discussed at the street forum the damages brought to the people and environment by mono-crop plantations. Although it is lucrative to the plantation owners, it is fatal to the displaced farmers and to other living things previously inhabiting that land.

Researchers have long blamed mono-crop plantations as environmentally destructive. Just the act of preparing huge tracts of land for a single or a few crops already requires destroying the plant and animals that used to live off that land.

Glarino said planting just a single crop to a vast area causes soil degradation, increased use of synthetic fertilizers, and water and soil pollution. Monocrops are also vulnerable to insects, weeds, fungi and other pests, prompting the use of insecticides, fungicides, and herbicides which further outbalance the ecosystem.

Worse, studies have pointed out that plantations in the country use chemicals that have been banned in other countries, Glarino said. She cited as examples Paraquat and Glyphosate, two chemicals that cause severe health problems affecting the people’s respiratory, digestive, nervous and other organic systems. 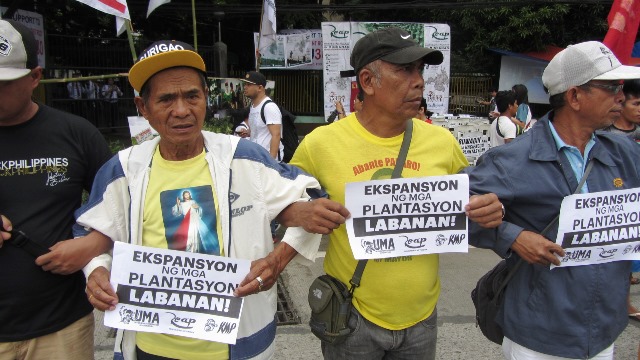 Despite all these, the Duterte administration has allocated another 1.6 million hectares for the expansion of plantations, a move which alarmed the peasant groups particularly those camping out today in front of the DAR. This has to stop, the Unyon ng mga Manggagawa sa Agrikultura said in a statement.

Among the modes employed by the government to effect the expansion of plantations are the deployment of investment defense forces, the peasants said during the street forum.

Another way that is just as dangerous and alarming, Glarino said, is the National Greening Program. She said it is the fastest growing tenurial instrument converting areas designated for reforestation into timber or non-timber commercial plantations.

They estimate that a total of 1,211,870 hectares of indigenous people’s lands are currently covered by the “greening” program.

She said it doesn’t pay humane wages. In their researches into plantation work, they have reams of findings attesting to the backbreaking, chemically dangerous work for long hours at the lowest wages. Arago said the plantations also employ child labor and pay women lower than the already low pay given to male workers.

All these can be resolved with policy reforms on land use, agrarian reform and agricultural development, the street conference said.

The farmers’ groups urged President Duterte to act favorably on their just demands. They warned that Duterte’s popularity has no way to go but sink low if he continues to side with the few such as those benefiting from the expansion of plantations.

It’s not because of imagined destabilization plot but worsening poverty that’s causing people to rise up in protest, UMA said to Duterte. In turn, there is this worsening poverty, they said, because the Philippine economy is always subject to a crisis as a result of landlordism and foreign plunder.