MANILA — A radio broadcaster who exposed anomalies in the local government was killed and his partner wounded in an ambush in Bislig City, Surigao del Sur, Oct. 24.

Christopher Iban Lozada, 29, operations manager and anchor of dxBF Prime Broadcasting Network was driving home with Honey Faith Tuyco Indog around 9 p.m. when gunmen in a van caught up with them in P-5 Coleto village and opened fire with what were described as “high powered firearms,” according to a police report.

Lozada died immediately while Indog was rushed to the Andres Soriano Hospital for treatment.

Before the incident, the broadcaster had reported receiving multiple death threats, some of which he posted on his Facebook page. 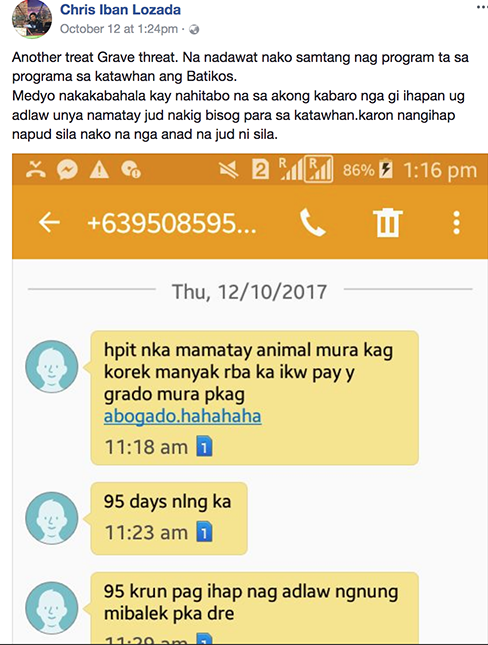 Lozada filed charges against Bislig Mayor Librado Navarro, who was ordered dismissed by the Office of the Ombudsman last month. The mayor was found guilty of grave misconduct for the anomalous procurement of a hydraulic excavator worth P14.8 million in 2012.

According to the National Union of Journalists of the Philippines, if proven that Lozada’s killing was work-related, he would be the fifth media practitioner murdered under the administration of President Rodrigo Duterte the 178th since 1986, the so-called restoration of Philippine democratic institutions.