“It is not enough to call for a halt to government-led disinformation campaigns. We will combat it on all fronts.”

MANILA – A few days before the year ends, President Rodrigo Duterte claimed in an interview with a radio station that some journalists are members of the Left.

His remarks came days after he proclaimed the Communist Party of the Philippines and the New People’s Army (NPA) as terrorist groups and weeks after he ordered soldiers to kill armed NPA guerrillas.

Given this context, Duterte’s unsubstantiated statement endangers the lives of journalists. Journalists covering the raging civil war in the country might be viewed as “conspiring with communists.” This is akin to Gloria Arroyo’s tagging of journalists as enemies of the state, thereby exacerbating the impunity in the country.

The year 2017 was characterized by continued media killings, heightened online threats and harassment against journalists, censorship, and systematic campaign to deceive the public.

According to the National Union of Journalists of the Philippines (NUJP) and the Center for Media Freedom and Responsibility (CMFR), six journalists have been killed under the Duterte administration. Four cases were said to be work-related.

In its annual worldwide roundup of journalists, Reporters San Frontiers (RSF) declared the Philippines as the deadliest country for journalists in Asia. 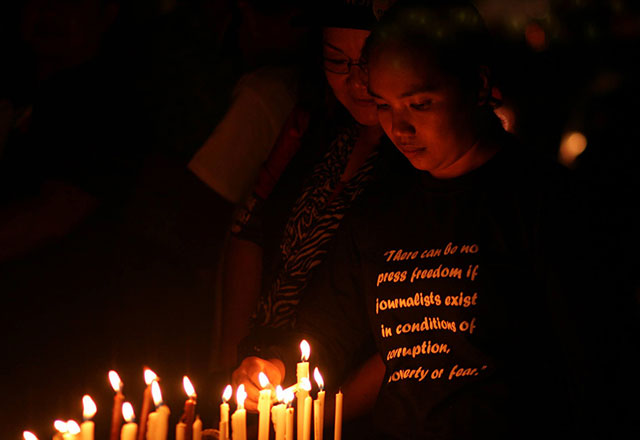 The RSF quoted Duterte’s comment shortly after being elected as president, “Just because you’re a journalist you are not exempted from assassination, if you’re a son of a bitch.”

“The threat proved to be more than just talk in 2017, with at least five journalists targeted by gunmen. Four of them succumbed to their injuries. The Philippines thus resumed a grim trend going back more than decade — one that was interrupted only in 2016, an exceptional year in which no journalist was killed,” the RSF said.

Another international press freedom watchdog, the Committee to Protect Journalists (CPJ) ranked the Philippines fifth in its 2017 Global Impunity Index.

The CPJ noted that despite the formation of the Presidential Task Force on Media Security in October 2016, there has been no conviction in the cases of killings of journalists.

The CPJ further noted that justice has not advanced for the 2009 Ampatuan massacre victims, among them 32 journalists and media workers. Three suspects were acquitted in July this year on grounds of insufficient evidence. The regional appeals court also upheld petitions for bail by Datu Sajid, a principal suspect, according to news reports.

Six journalists survived assassination attempts since 2016, according to NUJP and CMFR.

Scores of others received death threats. One of them was Kathyrine Cortez, vice president for news and public affairs of Radyo ni Juan Network. A message from mobile phone number +63 946 700 2090 threatened Cortez on Dec. 11, “isang bala nimu! meri xmas!” (One bullet for you. Merry Christmas). The unknown sender branded her as a communist.

Bulatlat also became a victim of red baiting. Roberto Tiglao accused this media outfit of being “run by Communist Party of the Philippines propaganda cadres.” https://www.bulatlat.com/2017/11/23/worse-fake-news-irresponsible-journalism/

Taking the lead from Duterte, journalists are routinely attacked by the President’s spokespersons and minions on social media for critical reporting.

Women journalists Gretchen Malalad, Jamela Alindogan-Caudron, Jam Sisante of GMA7 and Pia Ranada are but some of those who became subjects of online harassment and threats from pro-Duterte bloggers.

Besides online attacks, the Duterte administration also imposed outright censorship in Marawi for more than three months and in the coverage of so-called “war on drugs.”

Journalists were not allowed entry to the main battle area during the height of fighting between government troops and Maute fighters. The media had no opportunity to verify the data on the ground, including the body count. It was only during the rehabilitation phase that journalists were allowed to go inside Marawi City again, with the truth among those buried in the rubble.

Meanwhile, the lack of transparency in police operations against drug suspects continues to this day. No less than Philippine National Office (PNP) Chief Ronaldo dela Rosa ordered his men to withhold spot reports.

Dela Rosa’s order came after media outfits, both local and international, came out with investigative reports on the extrajudicial killings linked with Duterte’s “war on drugs.”

Systematic campaign to deceive the public

Not only does the Duterte administration attempt to discredit the media, it also systematically peddles lies.

A classic example of this is Duterte’s exaggerated claims about the “war on drugs.” He claimed that two to three policemen were killed daily in the “war on drugs.” A fact check by Vera Files revealed that only 86 state agents have been killed as of Nov. 27.
Upholding press freedom

Amid the intensifying attacks on press freedom and the people’s right to know, journalists and artists have vowed to expose the lies and reveal the truth.

“It is not enough to call for a halt to government-led disinformation campaigns. We will combat it on all fronts,” LODI (Let’s Organize for Democracy and Integrity) Arts and Media Alliance said in a statement.