‘Let me testify, prove my innocence in court’ — Mary Jane tells Pres. Duterte on her birthday 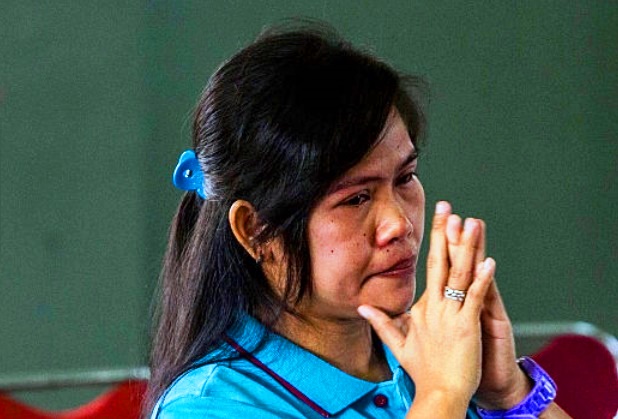 “President Duterte, my supposed execution was reprieved because Christina (Sergio) and Julius (Lacanilao) have pled their guilt and that I am innocent and had no knowledge of the drugs found in the luggage I brought.”

MANILA – Mary Jane Veloso turns 33 years old today. She is still a prisoner in an Indonesian maximum security jail. She lives on borrowed time. She knows, and her lawyers know, and her family and their friends at Migrante and everyone who came to wish her a happy birthday know, that the reprieve she got at the last minute of her scheduled execution three years ago might be lifted any time.

She still needs to have her death sentence removed. However, the Indonesian government said it would await the decision of Philippine courts.

In a shocking turn of events, Philippine courts have so far denied Veloso a chance to give her testimony in the case she and her parents filed against her recruiters, the couple Christina Sergio and Julius Lacanilao. Veloso presents a novel case in the Philippines – she couldn’t physically attend hearings because she is in jail in another country. She is in jail in another country because she was trafficked and did not know the luggage she was asked to carry were containing drugs. This was her consistent message, the same thing she wanted to say in the Philippine courts.

The Indonesian government disallowed Veloso from leaving prison to attend a court hearing in the Philippines. It only allowed her to send a deposition – it did not even allow her to face a camera or make a recording or virtually participate in an ongoing court hearing.

But the Philippine courts would not have this deposition. On January 5, the 11th Division of the Court of Appeals (CA) issued a decision affirming the injunction that barred her written testimony.

This week Mary Veloso must have earned enough from washing the clothes of her fellow prisoners in Indonesia that she managed to call her family and friends more often. (A representative of the Department of Social Welfare and Development, Aleli Bawagan, told her supporters at today’s birthday party that Veloso has been washing clothes of fellow prisoners to earn money so that she could call her family and friends in the Philippines.)


In a call to friends at the Migrante International in Manila on January 9, she sent an appeal to President Duterte.

She said in Filipino, “President Duterte, my supposed execution was reprieved because Christina (Sergio) and Julius (Lacanilao) have pled their guilt and that I am innocent and had no knowledge of the drugs found in the luggage I brought.”

She requested help from President Duterte so that she would be allowed to testify in the case of Christina Sergio in the Philippines “to reveal the truth so the real culprits will be held accountable.”

Veloso acknowledged that President Duterte is against drugs and that he wants to crush drug syndicates for everyone’s safety. However, she asked him too, how would disallowing her to state her case in court put an end to everything that has connections to drugs?

Velose ended her request to the President by saying that she and her family fully hope that President Duterte will help them be given the chance to testify in court and prove her innocence.