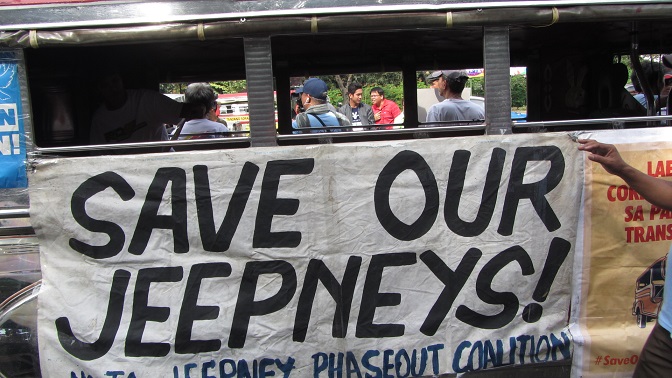 “Public transport must not fall under big private businesses because it will only be a milking cow for them.”

MANILA – The jeepney drivers’ strike held yesterday in Metro Manila and some urban centers outside of the capital focused its attention on condemning the Duterte administration’s “Tanggal-bulok, Tanggal-usok” campaign.
They described the campaign as just a new name for the jeepney phaseout scheme, which the Duterte administration is now implementing after the past strikes exposed the Omnibus Franchising Guidelines (OFG) as anti-poor.

Elmer “Ka Bong” Labog said the new name of jeepney phaseout, “Tanggal Bulok, Tanggal Usok,” for all its positive-sounding call, is just another packaging that will not benefit the majority of Filipinos. “Its aim is not really promoting clean and modern PUJs.”

If promoting clean and modern utility jeeps is the goal, the Pinagkaisang Samahan ng Tsuper at Opereytor Nationwide and a growing alliance of commuters have already proposed some doable steps to rehabilitate the jeepney without causing the small operators and jeepney assemblers to fold up and leave the industry. They proposed to rehabilitate the jeepney without asking the commuters to pay higher fares. Under the Tanggal Bulok scheme, they said the commuters are finding it harder to get a ride and yet they are facing higher fares.

In discussions with scientists and engineers, jeepney assemblers and manufacturers, researchers, commuters, and transport leaders, they crafted various proposals to rehabilitate the jeepneys, and make it more fuel-efficient. The non-government think-tank Ibon Foundation launched last month in UP Diliman a bunch of policy proposals seeking to address the problems of the capital’s mass transport system and the desire for sustainability. If the government will use it, it holds the key to achieving the Filipinos’ dreamed of transportation system, said Ros-B Guzman, head researcher of the book. 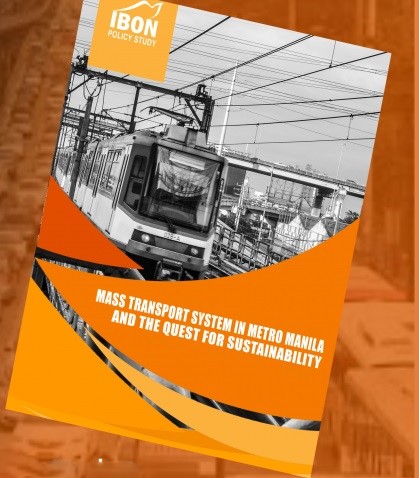 “In the face of the limits of current policies, there are alternatives, but a systematic and pro-people approach won’t likely come from big businesses or the government,” said Teddy Casiño of Bagong Alyansang Makabayan. As proof, he pointed to Tanggal-Bulok and how the government response to the transportation crisis has been hodge-podge at best, and generally looking out more for the interests of big business and not the majority of people who want a safe, efficient and affordable mass transport.

“Public transport must not fall under big private businesses because it will only be a milking cow for them,” Casiño said. This, he based on the Filipinos’ tragedy with the MRT-3.

Under the Duterte’s jeepney phaseout program, from 2018-2020, they will phase out up to 200,000 jeepneys and remove all single unit and individual operator-franchises. These will be replaced by big businesses’ owned, or corporate or consolidated franchises’ new vehicles, each of which cost over P1.6-P1.8 million.

Labog said the jeepney drivers’ strike sends a message to the Duterte administration: ‘the Filipino people will not allow this government to sell our public transport system to big businesses.’

At the same time, the labor leader castigated the Duterte administration for employing “fear mongering” and “hysteria” in its response to yesterday’s successful transport strike.

Most of the striking jeepney drivers and their operators said their jeepneys can run better and cleaner at less cost to the passengers. They took a swipe at the government’s troubled handling of the Metro Rail Transport System (MRT-3). The jeepney operators said that if they had the same kind of support, the jeepney won’t get to this level that a government who can’t run MRT can apprehend them and say the jeepneys are “bulok” or rotten.

The drivers lamented that instead of giving them support, the government seems to be doing its best to drive them to the ground.

Who among the jeepney drivers does not want a sparkling new jeepney running better and cleaner? Steve Ranjo, secretary-general of Piston, asked. He said that even without a lot of funds, the driver-operators have solely shouldered the cost of maintaining the public utility jeepneys. The government has not helped, even made it difficult for them, he said, as the government allows for liberalized oil pricing, and exacts various fees and fines from them.

Then here comes the so-called Tanggal-Bulok campaign that farther adds to the fines. Because of Tanggal Bulok, Ranjo said the drivers and operators must cough up a minimum of P5,000 for every charge listed by the government’s apprehending team.

He said the drivers are doubly burdened because they have to struggle to pay for the Tanggal Bulok fines before they can attend to the offending “bulok” or malfunctioning parts.

“Some drivers can’t afford the fines and the needed repairs especially when they were unable to ply their routes. So, they are forced to just stop driving their jeepney while scrounging for its maintenance,” Ranjo said. But this worsens the commuters’ difficulty in getting a ride, as Casiño pointed out when he scored the government’s hodge-podge approach to addressing the transport crisis.

In last Monday’s transport strike in Metro Manila, Piston and allied drivers in the No To Jeepney Phaseout Coalition urged the government to consider instead these policy proposals which many transport stakeholders including commuters have come up after a series of conferences and workshops.

“What the riding public of workers, urban poor students and professionals need is a safe, efficient and affordable national mass transport system that promotes public service over big business profits,” Labog said in a statement.

George San Mateo, national chairperson of Piston, will reportedly be slapped with another case for his role in last Monday’s transport strike. Asked if this would stop him or Piston from opposing the jeepney phaseout program, he replied that on the contrary, they will strive to widen and deepen the drivers’ launching of transport strikes. The No To Jeepney Phaseout Coalition vowed to hold longer and more encompassing jeepney strikes.

The KMU reminded the Duterte administration that the PUJ drivers and operators “have every right to hold transport strikes in defense of their livelihood and to advance the interests of the riding public for a safe, efficient and affordable mass transport system.”