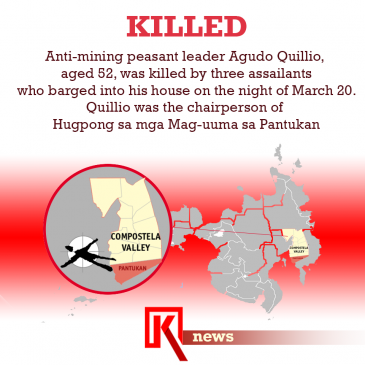 A leader of a farmer’s group in Pantukan, Compostela Valley was shot dead in his house at 6:30 p.m. on March 20.

Agudo Quillio, 52, chairperson of Hugpong sa mga Mag-uuma sa Pantukan (Humapan), was in his house preparing dinner for his family when three armed men forcibly entered their door. The men headed straight to Quillo, and shot him multiple times in the chest instantly killing him, the Karapatan Southern MIndanao Region wrote in their report.

Quillio led the peasant group Humapan in campaigning to stop the mining exploration activities of the American-owned St. Augustine Mines Ltd. in his town. Kingking in Pantukan is one of the prime mining areas that began to be actively promoted to foreign investors under the Arroyo presidency.

Quillo had also participated in the campaign of Agrarian Reform Beneficiaries to recover their lands from the control of banana plantations in Davao del Norte.

The human rights group Karapatan suspects the assailants are under the 46th Infantry Battalion. They lambasted the military for its vicious attacks on anti-mining advocates.

Two years before, in January 27, 2016, another anti-mining leader, Teresita Navacilla, was shot in Kingking, Pantukan. She died in the hospital three days later. Like with Quillo, the attack was reportedly perpetrated by soldiers from the 46th Infantry Battalion which has been assigned to secure the King-king mining project.

Before the fatal shootings, the same infantry battalion have reportedly assaulted and arrested members of the Mansaka tribe and other residents opposed  to the mining project.