You Are Here: Home → 2018 → April → 6 → Duterte orders negotiators to work on resuming talks with Reds

Duterte orders negotiators to work on resuming talks with Reds 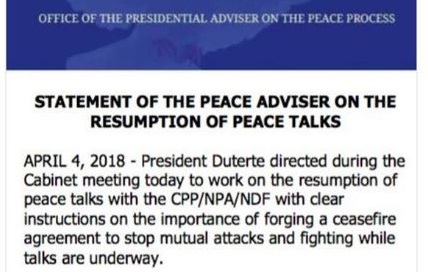 “President Duterte directed during the Cabinet meeting today (Wednesday) to work on the resumption of peace talks with the CPP/NPA/NDF [Communist Party of the Philippines/New People’s Army] with clear instructions on the importance of forging a ceasefire agreement to stop mutual attacks and fighting while talks are underway,” Dureza said.

Dureza added that Duterte has said to give the peace process “…another last chance”.

He said the Duterte has also committed “to provide support” to the revolutionary movement as long as it stops imposing and collecting taxes.

NDFP chief political consultant Jose Maria Sison for his part said that formal peace negotiations are the right venues to deal with GRP’s issues and complaints such as ceasefire proposals and the NPA’s revolutionary taxation activities.

“The resumption of peace talks between the GRP and NDFP negotiating panels is needed precisely to deal with substantive issues and complaints,” Sison said.

Sison said that in the same round of formal talks, the parties can present conflicting positions and subsequently seek to solve problems “on mutually acceptable grounds.”

He said that both negotiating panels already have a draft of the agreement on coordinated unilateral ceasefires, “which is under the watch of a joint national ceasefire committee.”

“This draft agreement is in effect the start of a bilateral ceasefire agreement. It is a significant step towards the Comprehensive Agreement on the End of Hostilities and Disposition of Forces,” he added.

Sison also said that the GRP and NDFP has already achieved substantial consensus on the general principles of agrarian reform and rural development and national industrialization and economic development, which both parties acknowledge are the most important parts of the prospective social and economic reforms agreements.

He added that there is also a draft amnesty proclamation to release all the political prisoners listed by the NDFP in compliance with the Comprehensive Agreement on Respect for Human Rights and International Humanitarian Law.

“When the GRP and NDFP negotiating panels meet, they can be confident of achieving substantial success. Without a formal meeting of the panels, there can only be an acrimonious public exchange of complaints and demands, which appear or sound like the preconditions prohibited by The Hague Joint Declaration,” Sison said.

The Hague Joint Declaration requires that no side shall impose on the other side preconditions that negate the character and purpose of peace negotiations.

“The conflicting parties become negotiating parties precisely to thresh out serious differences and complaints and seek the solutions to achieve a just and lasting peace,” Sison explained.

“As a matter of course, the two panels shall reaffirm all the existing agreements by way of ending the previous termination of the peace negotiations. It logically follows that the two panels shall cooperate in doing away with the obstacles and hindrances to the agreements and to the entire peace process,” he added. Reposted by