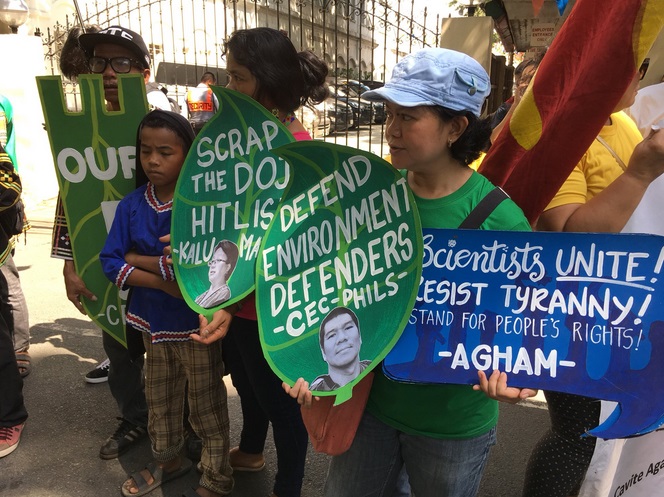 “Green activists are being terror-listed, slapped with harassment charges, faced with martial rule, and even murdered as if environmental activism is a crime.”

MANILA – Short of saying that the Department of Justice (DOJ) is sowing an injustice, environmentalists, indigenous peoples and farmers gathered as Kalikasan People’s Network for the Environment held a picket at the Justice department on Friday, April 20. They asked the DOJ to stand with the people in defending the environment and its resources, instead of allowing itself to be used as a tool for muzzling environmental defenders.

Specifically, the group asked the DOJ to withdraw the petition it filed, February 21, seeking to proscribe as “terrorist” the Communist Party of the Philippines and the New People’s Army, as well as 657 allegedly ranking members of these organizations. The Kalikasan PNE said that through this proscription, the DOJ is, in fact, targeting activists and citizens, among them 37 environmental defenders, inaccurately branding them as “terrorists,” harassing them and constricting their freedom to protect the environment.

“In the context of the Duterte government’s compromise of our national sovereignty and patrimony to foreign interests, this repression of opposition would further expose our natural resources to the unbridled corporate greed of exploitative and privately-owned corporations,” the petition filed by Kalikasan PNE said.

“Green activists are being terror-listed, slapped with harassment charges, faced with martial rule, and even murdered as if environmental activism is a crime,” said Leon Dulce, national coordinator of Kalikasan PNE.

International environmental groups such as the International Union for the Conservation of Nature (IUCN) and UN Environment (UNEP) have also objected to the DOJ’s proscription list, the Kalikasan PNE said.

The international watchdog Global Witness has previously reported that the Philippines remains the second deadliest in the world for land and environmental defenders. In 2017, they collated documented reports on 44 killings.

At present, there are a number of projects deemed destructive to the environment that are in various stages of implementation all over the Philippines. In many cases, they are either being stalled or limited by community protests. These projects have also been associated with militarization and human rights violations. Among these are the Chinese-funded Kaliwa-Kanan dam in Rizal province, and along the Chico River in the Cordillera, the Australian takeover of Mt. Diwalwal’s resources in Compostela Valley which is violently elbowing out the local small-scale Filipino miners, and the controversial Tampakan mining project in Cotabato that has recorded a massacre and continuing harassment and killing of local protesters. The proposed mine site covers one of the richest finds in Mindanao, and would include forest denudation and open-pit mining when fully operational. The project is backed by Australian, Canadian, and Swiss capital.