In peril: Southeast Asia’s environment and its defenders (Part 1 of 2)

To any passersby in their community, Aleta Baun comes across like any typical village woman engaged in weaving for a living. But the unassuming 52-year-old Indonesian is an environmental activist of the indigenous Molo people. She received the prestigious Goldman Prize in 2013 for her advocacy in protecting Mount Mutis in Timor, Indonesia against the destructive mining corporations.

A culturally sacred site for the Molo, Mt. Mutis is home to species of bonsai eucalyptus trees endemic to the island. Aleta led in organizing and mobilizing her people resulting in the cessation of mine operations in Mt. Mutis in 2011.

But their successful campaign was not without intense hardship and sacrifice. One night in 2006, hired goons of the mine companies hacked at Aleta with their machetes. She survived the attack. She hid for months in the forest with her two-month-old baby. The attack did not make her falter in their advocacy.

In fact, their community has recognized the women’s leading role in the campaign against the mine companies — the women comprise the protest frontlines. They brave the threat of company goons and government forces while the men are left behind to attend to housework and child-care. “We recommend to all women who joined the movement to stay in the forest, and urged all men to mind the children and our house,” she told the journalist Febriana Firdaus in an interview.

Like Aleta and her fellow Molo people, tens of thousands of communities continue to defend their land, resources, and rights across Asia. But they are facing peril in their struggle for environmental protection and natural resource conservation.

A resource-rich and ecologically sensitive region

Asia and its adjacent areas in the Pacific are known for its unique, diverse ecological systems, and bountiful natural resources. The continent is home to almost 60 percent of the world’s population. China and India alone account for the majority of this percentage.

Biogeographically, the Asia-Pacific is divided into two major areas. The first region is continental Asia with its vast forest and agricultural lands. The second region is insular Asia which is dominated by marine ecosystems. The Asia-Pacific island countries of Indonesia, the Philippines, Taiwan, and Papua New Guinea fall onto this second group. The region also hosts some of the world’s “megadiversity” areas.

The region is also one of the top destinations for extractive industries such as mining and logging. In Southeast Asia alone, a total $53 billion worth of major minerals was produced in 2012. Timber is also among Asia’s most coveted resources. Southeast Asia’s hardwood species such as teak (Tectona grandis of Myanmar and the Philippines’ Tectona philippinensis) are among the world’s most prized timber.

With so much biodiversity and unique ecosystems holding economically valuable natural resources, Asia is an alarming hotspot of biodiversity loss. The region’s ecosystems are facing massive environmental degradation and pollution resulting to high biodiversity loss. For example, Southeast Asia’s forests are among the world’s largest biodiversity areas but are now facing danger because of the expansion of industrial agriculture such as palm oil and rubber plantations. 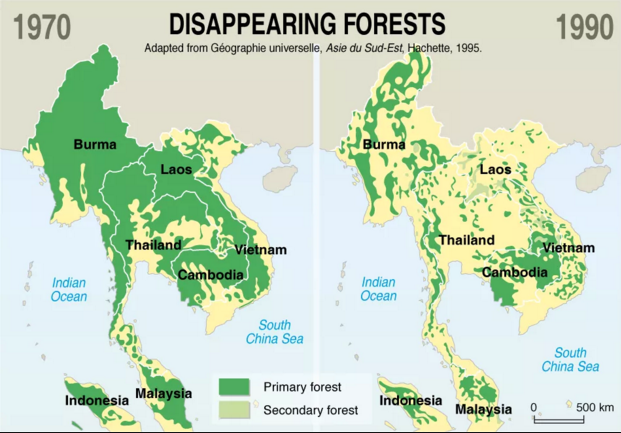 In the 2017 study of the Asian Development Bank, six (6) of the 37 which have the highest deforestation rates in the Asia and the Pacific come from the Southeast Asian countries. These are Timor Leste, Cambodia, Indonesia, Lao, Myanmar and Papua New Guinea.

Researchers from the Duke University and the University of Maryland in the United States found a 53 percent increase in the total forest area loss in the tropics from 2001-2012. 73 percent of that deforestation occurred in South America and Southeast Asia.

Despite this abundance of biodiversity and natural resources, the Southeast Asian people do not benefit from these resources nor have their use of their resources resulted in their peoples’ economic progress.

Based on 2012 data, 37 percent of Myanmar’s population was unemployed while 26 percent of its population lived below the poverty line. In East Timor for example, 20% of the national population is unemployed, while 49.9 percent live below the poverty line. Yet the irony is that Myanmar hosts some of the world’s enviable deposits of gold, copper, jade, and precious stone, on the other hand, on the other hand, has significant potential oil deposits, and even with its single known oil field manages to earn $100 million per month. Much remains to be desired from the levels of poverty its population experiences.

A 2013 study shows that 75 percent of the Philippine population belongs to the “lower classes,” which already include income poor and food-poor families. A common thread binds Southeast Asia: poverty and lack of modern industry amid the abundance of a natural resource base.

Countries in Southeast Asia largely have no means to process these resources for domestic benefit. The capital invested, technologies used, and the profits reaped by local and transnational extractive and pollutive industries do not stay in their host countries even as the environment and people are devastated in the process. Some call this phenomenon the ‘resource curse.’

As communities and people’s movements across Asia organize in defense of their lands, environment, and natural resources against plunder and exploitation, they face threats and violence from corporations and governments. Pushing for various destructive but profitable projects, governments and corporations often deploy private and state armed forces against any hindrance.

Global Witness said several countries in Asia have seen increasing human rights violations in relation to environmental advocacy and people’s defense of their resources. Out of the 24 countries they studied, 7 countries were from Asia. Among these countries are the Philippines and India, which are the second and fourth most dangerous place in the world for environmental defenders, respectively.

In India, just last May, paramilitary and police forces shot and killed 13 people in Tamil Nadu who were among the thousands of people protesting the pollution caused by British mining giant Vedanta’s copper smelting plant which was operating in their area. No one has been held accountable for the incident, with the police even blaming the protesters for the conflict.

The entry of extractive projects like mining, large dams, and industrial plantations have led to the displacement of communities away from their homes and livelihood. People also suffer the consequent environmental degradation and pollution from these projects, adversely affecting their health and culture.

From clandestine death squads to formal military and paramilitary troops, governments use militarization and violence as investment guarantees to ruthlessly impose corporate interest veiled as national interest on the people. In the Philippines, at least 69 percent of suspected perpetrators of the killing of environmental defenders were state armed forces citing their mandate to protect destructive projects they call “vital installations” and “flagship projects.”

Anti-mining activists in Myanmar have been convicted with imprisonment and heavy labor for “sedition.” Indonesian courts have also recently used various obscure and draconian laws to prosecute environmental advocates, covering at least 157 individuals in 2017.

Across many Asian states, internal security programs go hand in hand with laws that ease the entry of investors engaged in resource plunder, upholding the environmentally-destructive globalization policies of privatization and liberalization of the commons.

Environmental defenders who are at the forefront of community struggles thus face a myriad of threats. Aside from outright assassination and massacres, their adversaries also employ threats and harassment, illegal arrest and detention, and trumped-up charges to discourage them to continue their advocacy. These attacks not only violate the democratic rights of advocates and people but also greatly undermine efforts to protect and conserve the environment and its natural resources.