You Are Here: Home → 2018 → August → 4 → Gov’t, PNP agree to a military pull-out from IP communities; military refuses to sign accord

Gov’t, PNP agree to a military pull-out from IP communities; military refuses to sign accord

SAN AGUSTIN, Surigao del Sur – Police and local government officials here agreed in a meeting with Lumad leaders for the pullout of military detachment and troops in Lianga town after indigenous people residents evacuated their communities early this month.

Lumad leaders, local government officials and the Armed Forces of the Philippines came up an agreement in a meeting of the Provincial Crisis Management Committee on Monday, July 30, at the San Agustin Municipal Hall, containing the following:

• Deactivation of the military detachment at the Km. 9 Simowao in Barangay Diatagon, Lianga, Surigao del Sur;

• To permit the military to conduct operations where there are (verifiable) presence of the New People’s Army or other armed groups;

• Conduct a validation of the military pullout through an ocular visit at the area to ensure the safety return of the evacuees;

• Soldiers are prohibited to stay at the houses of civilian communities;

• Residents should not entertain NPA or armed rebels and report to the AFP or PNP regarding their presence in the area;

• Local government units and other agencies like the Department of Social Welfare and Development shall provide basic social services in the area.

AFP officials led by Col. Maurito Licudine, deputy brigade commander of 401st PA, declined to sign the document since they were not authorized by their top officials.

Col. Licudine refused to answer questions from the media. 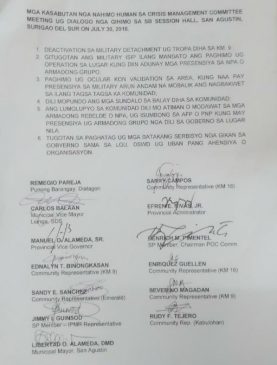 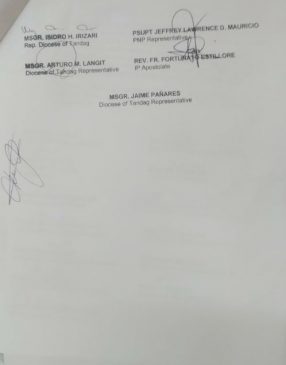 Alameda said the provincial government would request the Barangay council of Diatagon to pass a new resolution to revoke the previous one.

For his part, current Diatagon Barangay Captain Remegio Pareja told Davao Today that the military has asked for permission to set up a camp but clarified that the present nor the previous set of officials has not issued any resolution.

“No resolution was passed by the former council. It was mandated by the President but we do not have a resolution asking them to put up a detachment,” said Pareja.

Pareja added they are set to hold a session on August 6 to discuss and possibly pass a new resolution based on the agreement made by the Provincial Crisis Management Committee.

Sarry Campos, spokesperson of MAPASU or Malahutayong Pakigbisog Alang sa Sumusunod, said they were dismayed with the military’s refusal to sign the agreement.

“Because they did not sign the agreement, we are worried because the military can go back anytime to put up a detachment in our community,” said Campos.

On Tuesday, July 31, a group held an ocular visit to Sitio Km. 9 Simowao where the detachment was located and the nearby community of Km. 16 to validate the Army’s the Army’s order to pullout their troops, as part of the agreement.

The group was composed of the Lumad leaders, religious groups, local government officials and delegates of the 2nd International Fact-Finding Mission and Solidarity Mission led by Gabriela Party list Rep. Arlene Brosas. The mission set from July 30 to August 3 aims to document cases of human rights abuses in Mindanao.

The detachment was already dismantled at the time of the visit. The mission participants found debris, some alcohol bottles and bullet shells.

Gabriela solon Brosas said it is illegal to set up a detachment within a civilian community.

Brosas added that residents reported cases of harassments and abuses by soldiers against women.

MAPASU’s Campos said they would first conduct a consultation with the rest of the evacuees to come up with a decision regarding their return to the communities.

The Lumad evacuees are staying at the Barangay Buhisan in San Agustin town as of press time.

More than 1,600 Lumad evacuees took the national highway on Monday, July 30, in a bid to reach Tandag City, the capital of Surigao del Sur, as a protest against military encampment of their communities.

The Lumad evacuees previously sought refuge at the Barangay Diatagon Gymnasium in Lianga town from July 16 after soldiers set up a camp early last month.

They decided to move due to “series of harassments by government troops and the local government’s lack support to provide water supply and sanitary facilities” at the evacuation site. Reposted by