You Are Here: Home → 2018 → September → 1 → UP president dared to join Sept. 21 protest against rehabilitation of Marcoses

UP president dared to join Sept. 21 protest against rehabilitation of Marcoses

The UP community called on UP President Danilo Concepcion to institutionalize the honoring of Martial Law victims and martyrs in the university, create more spaces for their historical role in overthrowing the Marcos regime, and providing courses for in-depth discussion of the Martial Law atrocities.

MANILA – Following the statement of University of the Philippines (UP) President Danilo Concepcion expressing his “deep regrets” for attending the August 25 Kabataang Barangay (KB) reunion, concerned groups challenged him to show his remorse and join the Sept. 21 protest as “a show of unity with the fight against dictatorship.”

Four days after attending the KB reunion organized by Imee Marcos, Concepcion said, “I intended no offense.” He went on to say, “I would like to assure the UP community that the University under my watch will never forget the dark period of our country during the martial law year.”

For many, however, the event last week turned out as an offense to the Iskolar ng Bayan’s historical role in fighting against the Marcos dictatorship, and developing the university as a bastion of activism.

For Sarah Raymundo, lead convener of Educators Against the Rehabilitation of the Marcoses, what happened “was an infliction of fascism in the university.” “Academic freedom could only be practiced if appropriate venue is provided for it,” she said in a press conference, Aug. 30.

First Quarter Storm member and UP Professor Judy Taguiwalo said the KB reunion held inside the univesity was an insult to UP’s martial law martyrs and victims, as KB was institutionalized before to further the pacification of the ranks of student activists on campus. 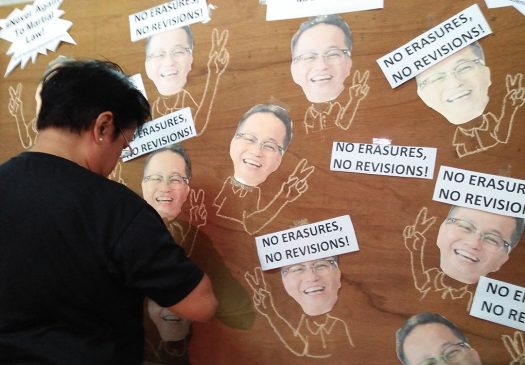 “We will never forgive and forget the atrocities done against the UP students, publication members, and student leader-activists during the Marcos dictatorship. In response to Imee Marcos’ claim of organizing the event in the spirit of academic freedom, we will not budge with our disgust. If we want to create healthy discussions regarding the history of the militant struggle in UP, the administration should provide more spaces for it,” Taguiwalo said.

In a separate statement on Aug. 31, the UP Department of History also condemned Concepcion’s participation in the KB reunion. The department views it as “dishonor to the memory of UP students who sacrificed their lives fighting the dictatorship.”

The UP Department of History further said in Filipino, “As a national university, we must take responsibility in fighting the collective forgetting of the nation’s dark experiences under the dictatorship.”

The UP community called on Concepcion to institutionalize the honoring of Martial Law victims and martyrs in the university, create more spaces for their historical role in overthrowing the Marcos regime, and providing courses for in-depth discussion of the Martial Law atrocities.

Almira Abril from STAND UP, meanwhile, refuted Imee’s claim that the millennials have moved on from the Marcos dictatroship. “The halls of UP have been venues for student demonstrations against the fascist Marcos dictatorship. This is supposed to be an anti-Marcos community, yet they had the guts to hold their party here. To Imee Marcos, face us, and dare tell us that the youth have already forgotten.”

Progressive groups in the university also find it ironic that an outsider like Imee could easily reserve the Bahay ng Alumni as venue for their event while the UP students and other residents are not only required to undergo bureaucratic process to secure a venue, they also have to pay for the costly venue rental fees.

“These are the struggles that the Iskolar ng Bayan continue to face inside the university. Despite Duterte’s pride of the Free Tuition Program, our organizations could not flourish due to the costly venue rental fees for our activities, and the outright repression of our democratic rights to organize,” Abril said.

They have declared their stand of prohibiting not only the Marcoses in UP, but also the corrupt and fascist officials like Duterte and Arroyo.

UP Prof. Emeritus Lito Manalili said, “The student movement, then and now, will not allow tyrants inside this sanctuary. In honor of our late brothers and sisters who fought and offered their lives for the revolution, our struggle shall remain.”