MANILA – Growers and traders of rice, onion, poultry and fish, farmers and fisherfolk, gathered in an unprecedented show of unity to defend the country’s local agriculture and food sovereignty from the government’s policies itself.

“It’s only now in our history that our agriculture is openly being assaulted like this,” the unity statement of the agricultural stakeholders said.

In a press conference in Quezon City, they detailed the government’s ineptness, at best, and at worst, what the head of livestock growers described as the government officials’ obstinate obedience to the neoliberal doctrine of liberalization and deregulation. Which evidently doesn’t work, they said. For proof, they pointed to the increasing price of rice as the country resorts to more and more importation.

Based on their statements, the Philippines’ rice problems of late is a mess brought about by the government policies itself, as the government tightens its embrace of neoliberal policies of liberalization and deregulation. If there were supposed less rice and fish in the market today, that’s a direct result of the government’s cumulative abandonment of its task to regulate rice supply and price. If the government is looking for someone to blame for the inflation and increasing prices of basic commodities as rice and fish, it is its own neglect to subsidize agricultural producers when other countries have been actively doing so, and its tax and investment policies that hit the agricultural producers and consumers hard.

The various agricultural stakeholders said the resulting mess could only get worse if the government continues to refuse to own up to its blundering policies and heap more problem-causing policies on top of another. Allowing greater importation of agricultural products is one example of piling another problem, even if it markets it as a supposed solution to the government’s self-created problem.

As the Duterte administration accelerates what amounts to a drive to flood the Philippine market with imported agricultural products, farmers and fisherfolk warned that this will further bring down the country’s agriculture to the detriment not only of current producers but of consumers and food security as well.

Solutions if Ph government has political will to serve the people
The combined proffered solutions of the farmers, fisherfolk and agricultural stakeholders are:

The Philippines has and could continue to have more than enough rice and agricultural products. The problem is the government’s policies that have been sabotaging the development of the country’s agricultural stakeholders, farmers and fisherfolk. “There is rice. But there is little to no NFA rice.” Or, as various agricultural players said, some NFA rice may be there, but not the NFA price.

The National Food Authority (NFA) has not done its job in rice procurement in 2017 and 2018. It has been buying less and less rice from local farmers in the past, leaving the farmgate rice prices at the control of local traders. But in recent years it bought even less than it used to. It spent the budget for rice procurement on debt servicing instead, a technical malversation that various groups want them to charge with. 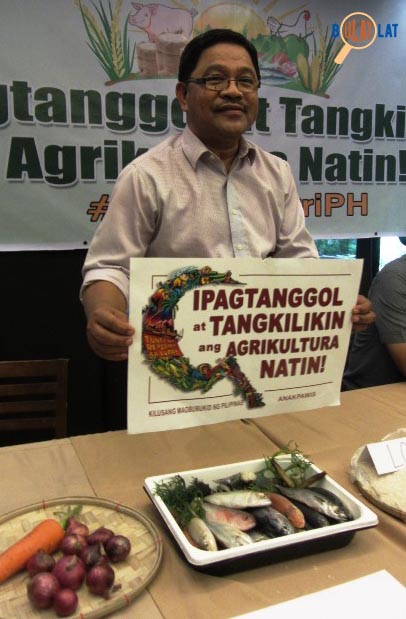 The NFA reportedly used its P5.1 billion and P6.1 billion budget allotted for rice procurement in 2017 and 2018 to repay loans and interests. If the NFA had followed the law and spent the budget on where it’s allotted to, if it bought palay (unhusked rice) at, say, P20 per kilo farm gate prices, it could have purchased up to 337 MT, which is good for at least 11 days buffer stock (now the NFA has just a day at most in buffer stock), said Rafael Mariano, former Anakpawis Partylist Rep. and Agriculture Secretary. The government could also spread out that buffer stock to 30 days depending on when the market needs an infusion of NFA rice to influence rice prices, he added.

Based on experience where the NFA has no presence, Mariano said the rice farmgate prices are even lower than P17. Leave the farmers more and more to the mercy of private rice traders, when they have had no support from the government and they have also been bearing the brunt of increased prices of input and operation due to deregulation and privatization, and what you’d end up with is further neglect of agriculture. If the others who continued planting were to suffer further losses due to stiff competition with imported products that are subsidized by its source countries, the local agriculture takes another knock-out assault.

“Here we see how much of a mistake the government policies are,” said Mariano.

What happened with rice – the steady climb in its prices as the government imported more and more rice — is now about to happen with fish, warned the Pamalakaya. This, when the Philippines has abundant fish in its waters and the fisherfolk can be helped to further improve fishery, said Fernando Hicap of Pamalakaya.

“The government through the NFA must prioritize local palay procurement over importation to stabilize rice prices and avoid the continuing rice crisis because of limited NFA rice supply,” said Cathy Estavillo, spokesperson of Bantay Bigas and AMIHAN Peasant Women.

2. Make NFA do its job in assuring the country’s affordable, safe rice supply

But having said that, it seems even at importing rice the NFA has been making wrong decisions at the expense of the consumers and local producers. As early as January this year, the NFA declared that its stocks were down to just 2 to 3 days’ worth of local consumption. Yet, considering it has not been buying more local palay and its knee-jerk reaction is to up its rice imports, it did not import rice during harvest time in other countries such as Vietnam and Thailand in March. Manalo said rice at that time was priced lower, and transporting it during summer lessens the risk of it getting wet, and thus avoiding the current problem of bukbok (weevil infestation).

On top of charges filed against NFA for technical malversation of the budget for rice procurement, other possible charges hover over them once the government accepts the rice infected with bukbok in Subic. Joji Co of Philippine Congrains said the import contract states that those rice only become government responsibility once it’s in the NFA warehouse. If it got infested and damaged on transport, the said rice remains the responsibility of the seller.

Other agricultural stakeholders also warned that if the government accepted the weevil-infested rice, it will set a dangerous precedent. It gives a go signal to every rice-exporting country to haul their stale inventories since the Philippine government will pay for it, anyway.

Estimates of both the grains traders and farmers’ groups arrive at P34 to P36 per kilo retail price of rice. They said the locally produced and imported rice can be set or controlled at this price and profits would still be earned. They arrived at the same suggested amount for price control even though the farmers’ groups computed from the prevailing farmgate prices and the traders computed from the import prices and attendant costs such as transportation, taxes (including tariff), bribes and other costs.

“Moderate the greed,” Joji Co of Phil Congrains said, a call to the rice traders and if they have coddlers in government. “Only private traders and importers benefit from importation while leaving our farmers and the entire local rice industry at the losing end,” said Bantay Bigas’ Cathy Estavillo .

There are a lot of reasons by now for the government to assess its actions and the difficulties these have been imposing on the majority of Filipinos. More than forcing the local consumers to buy higher priced goods that are of questionable quality (bukbok-infested rice, formalin-laced fish), the Duterte government and officials involved in particular in bringing down the country’s agriculture and fishery should be made accountable, various rural groups said.

Leading the list of government officials are those in the NFA, BFAR and the Department of Agriculture. The NFA for not doing its job in palay procurement and stabilizing prices at affordable levels, for supporting more rice importation, and so does the BFAR (Bureau of Fish and Aquatic Resources).

The Kilusang Magbubukid ng Pilipinas, Amihan and Samahang Industriya ng Agrikultura (SINAG) disputed the government claim that the NFA can’t buy palay (unhusked rice) at prices lower than P20 or P17. Pamalakaya also expressed alarm at the alacrity in which the government decided to import fish when it has yet to prove there is a shortage necessitating imports.

An organization of onion growers from Nueva Ecija also questioned the government’s decision last August to import red onions. The group had coordinated with the Bureau of Plant Industry and reported their supplies are enough for four months at least, but they were shocked to hear a decision to import was made without consulting them.

5. Revoke or suspend government policies that contribute to price hikes

At the press conference of various stakeholders in agriculture, they affirmed that to create and transport agricultural products they spend on oil and fuel. From using tractors to threshers to vehicles for distribution, agricultural production suffers the increasing costs of oil products. As such, any government policy such as the TRAIN (Tax Reform for Acceleration and Inclusion) that increases the prices of oil makes life harder for producers. “Why is the government blaming the farmers for the high prices of agricultural products when they don’t even look at the oil companies?” asked Rosendo So, chairperson of SINAG. He also blamed the high cost of electricity in the country.

If the government is really sincere in bringing improvements to people’s lives, it should not pass the blame on people or groups who are not in power and making the decisions, such as the decision they made for the neoliberal doctrine of deregulation and liberalization, said lawyer Jose Elias Inciong.

“This doctrine has been proven as deleterious to our productive sectors,” Inciong said.

Love your own, the farmers urged the public. It is not only practical and less costly, it’s also what the country needs to ensure food security.

On the day the disparate agricultural stakeholders gathered for the defense of Philippine agricultural products, they also combined to launch the online campaign for #LuvKoAgriPh.

“Filipino farmers and agri-producers have the capacity to feed the entire nation even without importation,” Mariano said in a statement. To realize this, he said, we need to provide land for our farmers and secure existing agricultural lands devoted to food production. Farmers could do with support services, production subsidies and rural infrastructure to bridge farm to markets. “The government needs to do away with its import-oriented, export-dependent economic mindset and strengthen the local agriculture for it to become a strong foundation of developed economy.” #