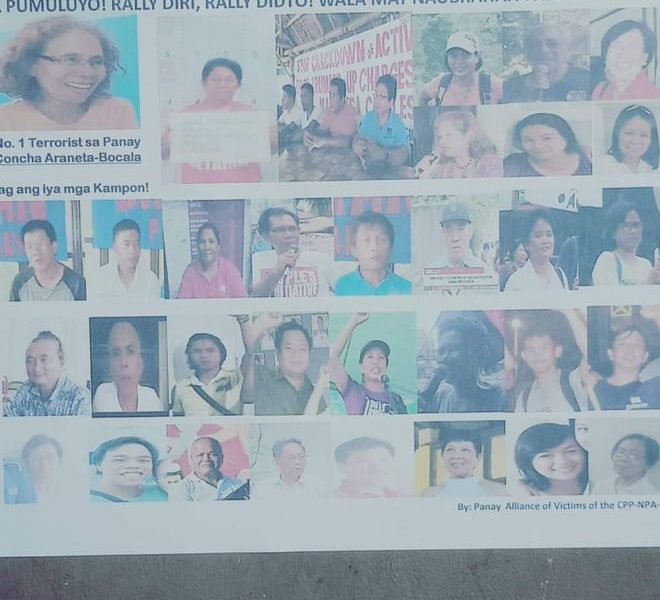 Last December 11, posters vilifying 41 individuals—mostly local civic leaders as well as activists in legal mass organizations, but also including lawyers and community journalists—appeared in Iloilo City. They were branded as “henchmen” of the Communist Party of the Philippines-New People’s Army-National Democratic Front, and accused of being “terrorists” and “extortionists,” terms the military often uses to describe New People’s Army fighters.

Included in these posters are two Panay community journalists who are members of the AlterMidya Network of around 200 independent and alternative media practitioners throughout the country. The journalists are reporters John Ian Alenciaga of the online publication Panay Today, and Roxanne Javellana of Dampig Katarungan, a weekly show aired over DYOK Aksyon Radyo Iloilo 720.

By naming these community journalists as “henchmen” of those groups the Duterte regime has tagged as it enemies, the posters mark them as targets for violence. Human rights lawyer Ben Ramos was also vilified in a similar poster before he was brutally gunned down in Negros.

These community journalists are regular contributors to AlterMidya’s online newscast ALAB Alternatibong Balita. Their reports have highlighted the deleterious effects of the Jalaur mega dam on the indigenous Tumanduk of Panay; the loss of livelihood of workers and small entrepreneurs affected by the closure of Boracay Island; consumer complaints of overcharging in electricity bills in Iloilo City; and militarization in farming communities, among others.

Community journalists are crucial in bringing underreported issues in the regions to national and international audiences. They give voice to the marginalized whose grievances are often ignored by the corporate media.

Supposedly from a group called the “Panay Alliance of Victims of the CPP-NPA,” the posters are very likely the work of the Armed Forces of the Philippines, which is at the forefront of the vilification campaign against dissenters and critics of the government.

We denounce these attempts to intimidate and silence journalists, civic leaders, lawyers, and activists in Iloilo and elsewhere in the Philippines. These attacks on journalists must end. We need journalists to continue reporting on the state of human rights and other issues in these dangerous times. One journalist threatened is one journalist too many.