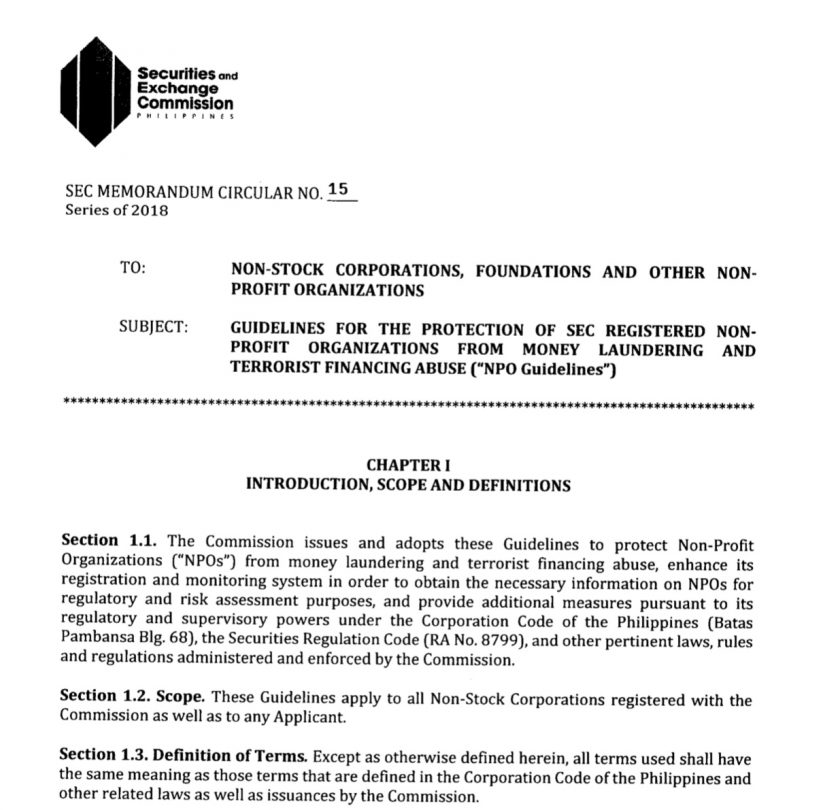 MANILA — Human rights groups are calling for the immediate revocation of the recently-issued Securities and Exchange Commission memorandum, which they say will grant the government agency unbridled powers over non-government organizations, threatening their existence under the guise of supposedly protecting them from money laundering and terrorist financing abuse.

In the 11-page SEC Memorandum Circular No. 15, the government agency will then be allowed to categorize NGOs according to their risk-based approach, which seeks to label them according to their vulnerability to risks and even order an outright dismissal of their registration if they are among those marked as “blacklisted.”

The mandatory SEC registration serves as the “legal personality” of an organization.

In a statement, the National Union of Peoples’ Lawyers (NUPL) said this is part of the “continuing crackdown on dissent and opposition” that may “threaten the very existence of non-profit organizations, stifle their voices, and disrupt their advocacies.”

President Rodrigo Duterte, in the past, has repeatedly attacked human rights groups that criticized his policies, especially on his bloody war against drugs. He has also used the presidential platform to attack individuals and civil society organizations such as the urban poor group Kadamay.

The lawyers’ group said the SEC, through this memorandum, will share information with law enforcement agencies and empowering it “perform virtually any act necessary to conduct investigations of violations (not only those consummated but also those about to be committed), such as the power to subpoena witnesses, compel attendance, take evidence, and even enlist the aid and deputize all enforcement agencies — civil and military.”

SEC Memorandum No. 15 dated… by on Scribd

The NUPL said no clear set of parameters have been provided in the memorandum that will define SEC’s new powers to categorize NGOs “at risk” on the basis of vaguely word “threats and vulnerabilities.”

They added that in excess of its regulatory powers, the SEC requires “without a court order mandatory disclosures of information” that are not previously required in exisiting pertinent Philippine laws,” such as the naming of nebulously defined ‘politically exposed persons’ as donors.”

This, the human rights lawyers group said, will violate the fundamental freedoms of the people, especially those who have been tagged as “communist fronts.” It will also subject them to “to surveillance, harassment and other rights violations, and constricting civic space.”

“The peoples’ freedom of association— cherished for being the vehicle for the exercise of many other civil, cultural, economic, political and social rights — is essential to a genuine democracy and just society. Any restraints placed on its exercise other than necessary in a democratic society must be strongly resisted,” the NUPL said.

In a statement, human rights group Karapatan said the memorandum was issued without the benefit of consulting NGOs that it purportedly wishes to protect.

“Through the said memorandum, the SEC is given control of all non-profit organizations in the country, as it is weaponized to infringe on the freedom and capacity of these organizations to freely conduct or perform their advocacies,” Karapatan secretary general Cristina Palabay said.

Such an arbitrary yet powerful memorandum, the group explained, will justify a new witch-hunt but will target the same people and organizations, impeding the “work of human rights defenders, aid and development workers and other non-profit/non-government organizations and will surely result in the further constriction of civic space in the Philippines.”

Palabay said, the new memorandum “is an extension of the mounting repressive policies insidiously implemented by the Duterte government in installments, so as not to betray its real intent of curbing all platforms for dissent.”