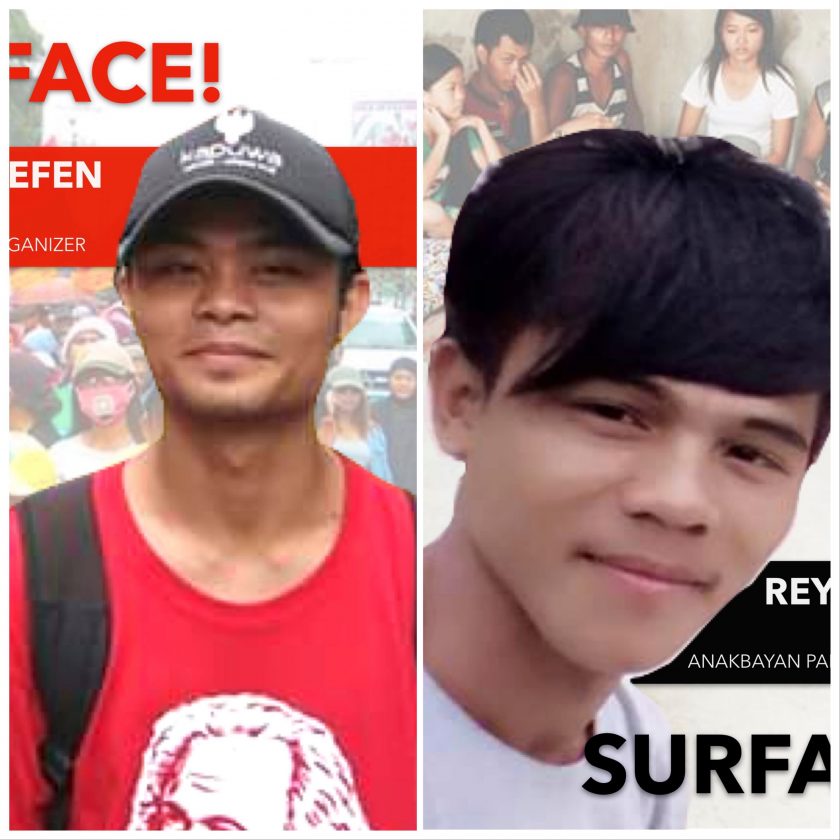 They were accosted at gunpoint between 10:00 to 11:00 in the morning while posting posters of senatorial aspirant Neri Colmenares and partylist group Bayan Muna along Angat-Pandi Road, according to eyewitnesses.

Kadamay said in its statement that they were forced into a red car that bore no license plate by armed men in plainclothes, right in front of the Iglesia ni Cristo church in Brgy. Sta Cruz, Angat, Bulacan.

Kadamay’s chapter in Pandi learned of their abduction when they noticed the election sortie vehicle, along with their election materials, parked along the highway in the afternoon of April 13. The two, however, were missing.

Kadamay said they have already searched police stations in Angat, Norzagaray, Sta. Maria, and San Jose del Monte but were told that the two are not in their custody.

Arlegui and Remias were among the members of Kadamay who occupied the abandoned government housing in Pandi, Bulacan.

The urban poor group suspects that the abductors belong to the 48th Infantry Battalion of the Philippine Army.

Last year, no less than President Duterte ordered an elite police force to go against Kadamay, whose members were occupying government housing units. He went as far as ordering to have them killed should Kadamay resist a police takeover in the housing units.

This is not the first time for Kadamay members in Pandi to be subjected to rights abuses.

On March 26, 2019, two Kadamay members Marlon Acedera and Joel Chavez were illegally arrested when bullets were supposedly found in their homes within the occupied housing in Padre Pio Resettlement in Cacarong Bata, Pandi.

The two remain incarcerated as of this writing.

Kadamay national chairperson Gloria Arellano called for the surfacing of their two members.

She added, “we blame the Duterte regime for openly attacking the legal democratic movement with all the possible means in order to quell the resistance of the Filipino people against its anti-poor and anti-people policies.” (bulatlat.com)