You Are Here: Home → 2019 → May → 2 → Filipino journalists, advocates commemorate #WorldPressFreedomDay 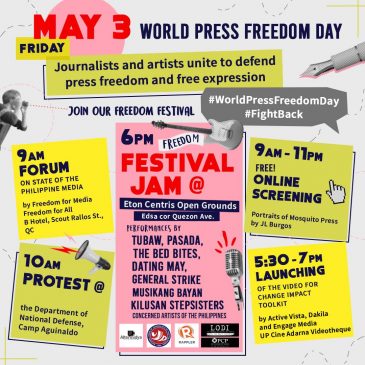 With the call to #FightBack, they stress the need to defend press freedom and free expression in these trying times.

9 a.m. – A forum on the State of Philippine Media will be held at B Hotel, Scout Rallos St., Quezon City. This is organized by Freedom for Media, Freedom for All, which includes the National Union of Journalists of the Philippines, Center for Media Freedom and Responsibility, Philippine Center for Investigative Journalism and Philippine Press Institute

10 a.m. – Members of Altermidya People’s Network will stage a protest action in front of Camp Aguinaldo to denounce the cyber attacks, red tagging, threats and harassment against journalists and human rights defenders

5:30 – 7 p.m. – Video for Change Impact Tool Kit will be launched at UP Cine Adarna Videotheque, organized by Engage Media, Dakila and Active Vista

The attacks against the Philippine media have intensified with the arrest and charges against Rappler CEO Maria Ressa; cyber attacks against the alternative media outfits; red tagging of journalists; and the recent matrix released by Malacanang accusing journalists and lawyers of plotting the ouster of President Duterte.

Journalists have not taken these sitting down. Alternative media groups have filed a civil case against IT companies found to be behind the distributed denial of service attacks. Rappler has questioned the coverage ban imposed by Duterte. Media groups named in the so-called “Oust Duterte” matrix have exposed the lies.

In a situation where the government becomes an enabler of the culture of impunity, journalists and other freedom-loving people are expected to assert their basic rights on May 3 and beyond.