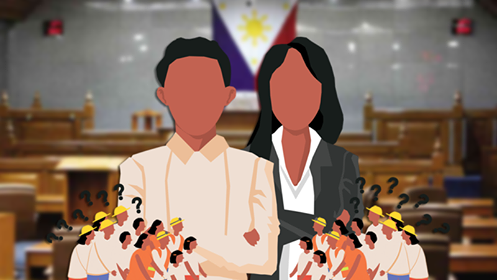 MANILA – Midterm elections have always been crucial for any incumbent, as results will either affirm or reject the programs and policies so far of the ruling party. The 2019 midterm elections, however, appears to be different, as it happens at the heels of the Duterte administration’s implementation of harshest neoliberal economic policies and undermining democracy. The Duterte presidency has seemingly consolidated the Executive, Lower House and even the Judiciary under its influence, and the Senate could be the last stronghold of democratic processes.

After weeks of campaigning, the 2019 midterm elections is near. Candidates vying for senatorial posts have traveled around the country seeking to convince Filipinos to vote for them. It remains to be seen whether or not we will have a truly independent senate after the May 2019 elections.

Looking at data from the Commission on Elections (COMELEC) shows that there are 61,843,750 voters in the Philippines with an additional 1,822,173 registered overseas voters for the 2019 midterm elections.

For overseas voters, the Middle East and African regions have the highest number of voters with 48.7%, while the European region has the lowest share of voters with only 10.2 percent.

While the huge number of voters does not automatically translate into voter turnout, in 2016 the country had an 84% voter turnout compared to 2013 with 77.3% and 2010 with 74.9 percent. Unsurprisingly, a high voter turnout can also be an indicator of dubious activities like flying voters.

Instead of dancing around and telling rehearsed jokes repeatedly, what does IBON think candidates should stand for to deserve the Filipinos’ vote in the upcoming elections?

First, candidates should adhere to the advancement of socioeconomic strategies. Filipino industries should be protected and supported instead of allowing foreign companies to dominate the Philippine economy. An example is protecting and promoting the agriculture sector through production and price supports instead of flooding the market with imported agricultural goods, as is the rationale behind the Rice Tariffication Law, to lower inflation.

Candidates interested in genuinely effecting long-term reforms for the country’s production sectors should support genuine agrarian reform. The failure of the Comprehensive Agrarian Reform Program (CARP) to redistribute land to the tillers has only intensified landgrabbing and land use conversions for land market speculation. Department of Agrarian Reform (DAR) records show that as of January 2019, there were still 549,920 hectares that need to be acquired and distributed. From 1988 to 2016, meanwhile, 98,939 hectares of land were approved for conversion while 120,381 hectares were approved for exemption from land reform coverage – but this is a conservative count as the real extent of land conversion may be underreported. After CARP, majority of so-called agrarian reform beneficiaries still do not own the land awarded to them or are in the process of being dispossessed because they are failing to amortize.

Third, candidates should be upholding people’s rights and welfare. Candidates should be firm in ending contractualization. It is still very much in place: Employment data shows that in 2018, 8.5 million workers of private companies and 985,000 workers in government agencies are still non-regular workers.

Additionally, legislating a national minimum wage of Php750 should also be a major agenda. Raising the average daily basic pay (ADBP) of Php401 nationwide to Php750 will in turn add Php7,649 to employees’ monthly income and Php99,432 to their annual income (including 13th month pay). This will cost the 35,835 establishments nationwide just Php465 billion or only 21.5% out of their Php2.16 trillion in profits.

Moreover, Republic Act (RA) 10963 or the Tax Reform for Acceleration and Inclusion (TRAIN) law should be repealed instead of taking out taxes especially from petroleum products which are socially sensitive. TRAIN means less money in the pockets of 8 out of 10 Filipinos as only 5.5 million Filipino families benefit from lower personal income taxes (PIT) while the remaining 17.2 million poorest households do not benefit from PIT but all pay higher consumer taxes.

Candidates should also ensure that basic social services will be accessible to every Filipino. That is why there is a need to build more public schools and public hospitals aside from allotting higher budgets to education and health. But 2019 budget for the Department of Health (DOH) for instance was cut by 8.13% compared to last year.

Lastly, candidates should promote environmental sustainability. For example, a candidate should be firm to stop destructive large-scale mining, as this causes irreparable damage not only to the country’s natural resources but to many indigenous communities. Another part of this is encouraging rational consumption. Our resources are finite – what we produce and consume must only be within our needs. Candidates should also promote an environment-friendly agriculture and industry.

The public has heard the candidates’ stances on various pertinent issues such as the TRAIN Law, Rice Tarrification Law, contractualization, and jobless growth. Now the candidates should bear in mind that whatever promises they made during the campaign period would be remembered by the people, who will hold them accountable when they take their posts this June 2019.

The new senate should carry out the task of defending the current constitution against the Duterte administration’s push for federalism, neoliberalism, and self-serving political goals. The most consistent is the intent to fully liberalize the Philippine economy for foreign investors.

The Philippine Senate could be the last democratic institution for the government’s checks and balances, independent of and not beholden to the power ambitions of the presidency and expected to side with the people and defend whatever remains of Philippine democracy, people’s rights and welfare, and the country’s sovereignty.

With all these considered, the 2019 midterm elections could be one of the Filipinos’ last stands for freedom and democracy. Depending on how their favorite candidates have explained these to them, they can now vote wisely.