We will also ask other lawyers groups to help in what we hope to be the filing of voluminous cases against the perpetrators of these heinous crimes.

MANILA – The National Union of Peoples’ Lawyers (NUPL) will hold President Duterte accountable for the numerous rights violations he committed against the Filipino people once he steps down from office in 2022.

This is the resolution of the peoples’ lawyers who gathered for their fifth national congress on Oct. 19-20 here in Manila. Lawyers from various NUPL chapters agreed to start the preparation of cases to be filed against Duterte and to what it calls the “infrastructure of impunity” in the justice system or “those who shield these perpetrators from punishment and accountability.”

Colmenares said since Duterte claims that he is immune from suit because he is sitting as president, they will, as of now, pursue more cases against him at the UN and other international mechanisms.

“Duterte cannot even promise members of the police and military that they will not go to prison because even he himself cannot escape criminal accountability once he steps down from office,” Colmenares said in a statement. 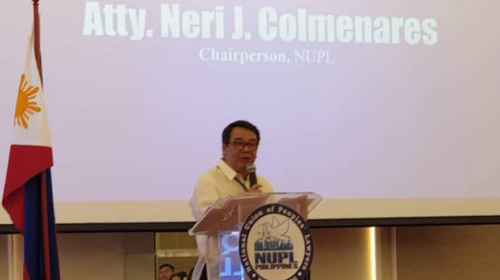 He said they received reports of police’s scheme in filing cases against activists where they purposely use a false address so that the accused will not be able to answer the summons of the prosecutors.

“Should we find that prosecutors purposely and maliciously filed cases against activists without undertaking due diligence in ensuring that the accused are given the chance to counter these complaints, we will not hesitate to also file administrative cases against them,” he said.

Meanwhile, NUPL Secretary General Ephraim Cortez said that they will “exhaust all legal venues, both domestic and international, to provide legal remedy to the families of victims of human rights violations.”

The NUPL was founded in 2007 during the administration of then President Gloria Macapagal Arroyo where political killings and several other rights violations were committed against activists. They have been serving their clientele – the poor and the oppressed – for the past 12 years.