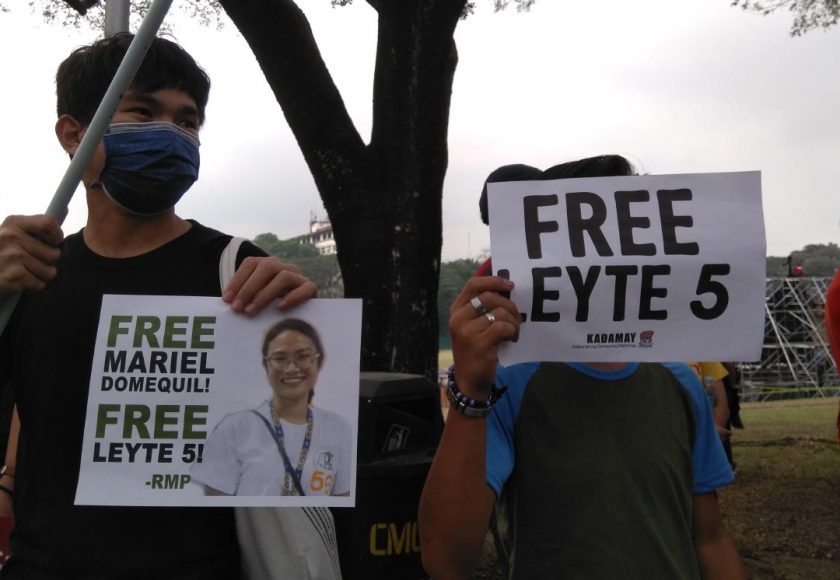 “The arrest of the Tacloban 5 (us) through the Armed Forces of the Philippines-Philippine National Police tanim ebidensya (planting of evidence) scheme is a manifestation that President Duterte’s administration and his cronies in the AFP in Eastern Visayas are trembling in fear because the legal activists, despite our young age and short experience just like what the AFP would say, did not fail to reach the grassroots.”

MANILA – Firearms and explosives in legal offices of people’s organizations and NGOs?

Human rights alliance Karapatan said the tactic of planting evidence against dissenters was done before in Negros and Manila, and has been repeated in Tacloban City, leading to the arrests of four activists and a journalist.

Based on the incident report prepared by the lawyers of Tacloban 5, at least 150 fully armed men implemented the raid.

They observed the same pattern of simultaneous raids in the Calanipawan Road, Tacloban City where the office of Eastern Vista is located and in Banezville II, Fatima Village, barangay 77, Tacloban City where Bayan, Katungod and Sagupa’s offices are located:
• The raiding teams forcibly entered the rooms
• Firearms were pointed at the victims
• Those arrested were either dragged or told to get out of the room
• They were told to lie face down
• Several personnel of the raiding team were inside the room for more or less 10 minutes
• Barangay officials who were supposed to be witnesses on the said searches came after the search

In the case of the first office (Banezville) the barangay officials merely signed as witnesses. They arrived 45 minutes after the occupants were told to get out of the rooms, the report read.

In the second office (Calanipawan), Cumpio woke up with two guns poked at her chest and waist. They were not allowed to take photos or videos of the incident. Their cellphones were also left inside the room. The police also took the P557,000 ($11,000) cash inside the cash box, which is not included in the search warrant. 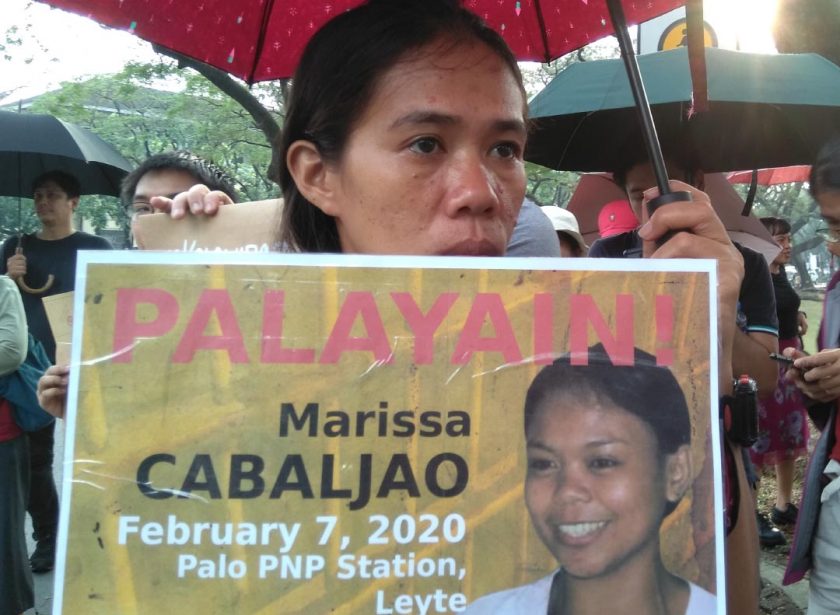 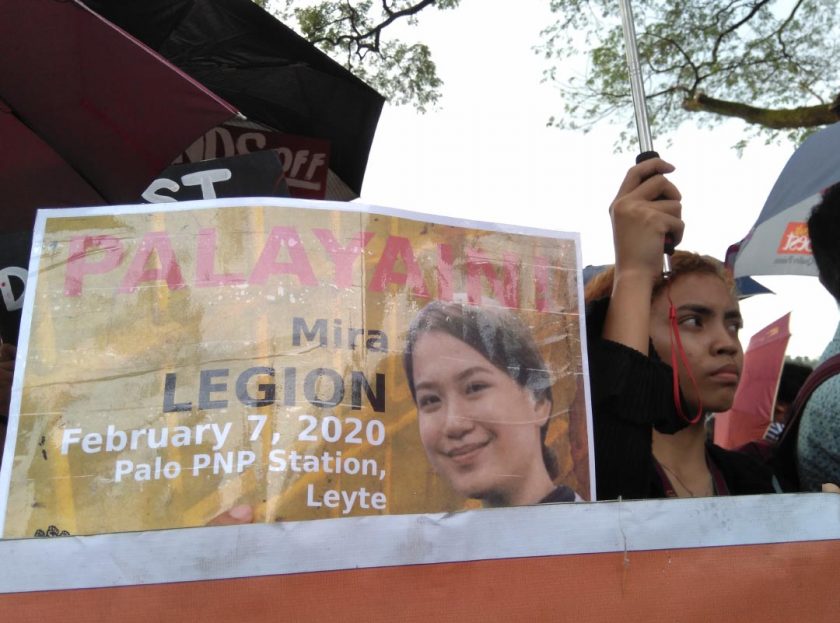 Based on the Inquest Resolution, Cumpio, 21, and Domequil, 21 were charged with illegal possession of firearms and explosives. Cabaljao, 33, and Legion, 21 were charged with violation of RA 10591 or Comprehensive Firearms and Ammunition Regulation Act with a recommended bail of P120,000 ($2368) each. Abinguna, 24, was charged with violation of RA 10591 and illegal possession of explosives. There is no bail recommended for Cumpio, Domequil and Abinguna.

In a statement, the five denied these allegations and asserted that the supposed evidence were planted.

“The arrest of the Tacloban 5 (us) through the Armed Forces of the Philippines-Philippine National Police tanim ebidensya (planting of evidence) scheme is a manifestation that President Duterte’s administration and his cronies in the AFP in Eastern Visayas are trembling in fear because the legal activists, despite our young age and short experience just like what the AFP would say, did not fail to reach the grassroots,” the group said in a Facebook post.

“The AFP-PNP may have threatened and brought fear to the students and their parents through their vilification campaign but never will they succeed in silencing the masses now facing a crisis because of the anti-people policies,” they added. 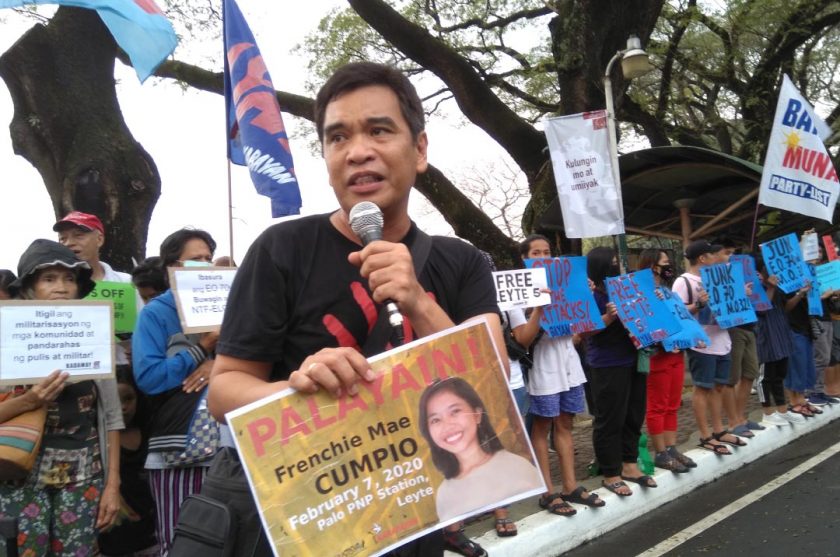 Karapatan Secretary General Cristina Palabay questioned the integrity and independence of Judge Eligio Petilla of the Regional Trial Court Branch 44 in Tacloban City, who issued the search warrants last Feb. 7 that led to the arrest of the Tacloban 5. “How circumspect has the judge been in personally determining the veracity of reports on the existence of such firearms and explosives in the offices? Did he look for other witnesses, other than the police officers or military intelligence agents who may have reported to him?” Palabay asked.

“We have been wary of judges who facilitate the use of their courts for the judicial harassment of human rights defenders,” Palabay said. “Are they, in any way, related to executive officials who have been brazenly implementing Executive Order No. 70? Will their signing of the supposed search warrants in the offices of these organizations result in juicier posts like those magistrates who have done the same?” she added.

Palabay said they observed that an officer of the court have been “rewarded” with a Supreme Court post after dismissing a petition for the privilege of the writs of amparo and habeas data filed by three non-government organizations last year, while another one is in the running as a Duterte-endorsed nominee for a Court of Appeals seat after issuing similar search warrants in October last year, when raids and arrests were also conducted by the police and military in Negros and Manila.

“Whether they have done this to further their careers or out of fear or out of political pressure, the effects are damning – the political persecution of activists and actual harm on their lives, security and liberty. These judges should be ashamed of themselves,” Karapatan said.