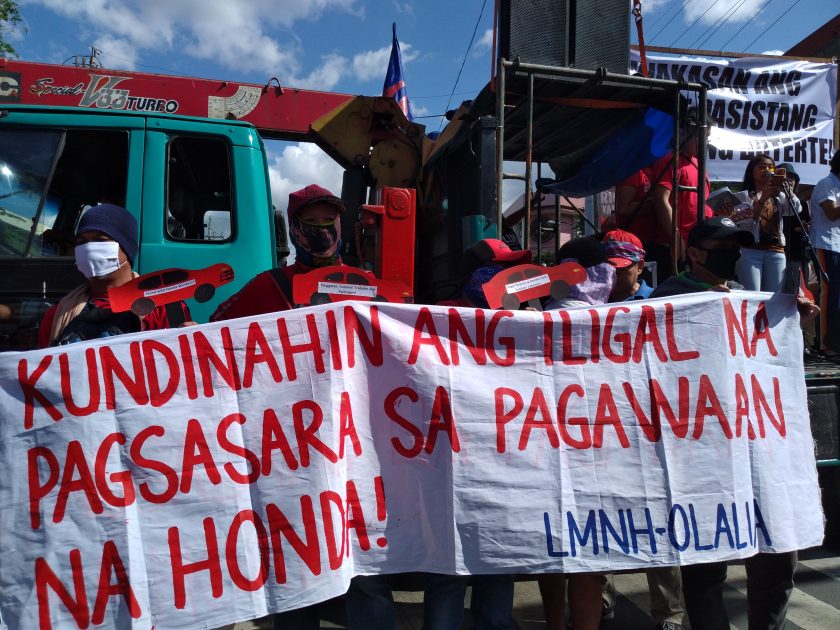 “It is not the government – who belittled the impact of Honda Cars’ closure – but the strength of workers’ unity that is key in achieving a better separation package in order to start again.”

SANTA ROSA, Laguna – After an abrupt closure, workers from Honda Cars Philippines, Inc. get a semblance of fair compensation following successful negotiations for separation pay and other benefits, February 29.

The 387 workers affected by the closure are entitled to separation pay amounting to 280 percent of their monthly wage for every year of service on top of basic pay, a lump sump of P110,000, extended effectivity of health benefits until December 2020, and priority employment should HCPI operate once again.
These terms were agreed upon following negotiations between the management of HCPI and the workers’ union, Lakas Manggagawang Nagkakaisa sa Honda (LMNH-Olalia-KMU).

“This proves that the workers could not rely on anything but solidarity and action against capitalists,” said Pagkakaisa ng Manggagawa sa Timog Katagalugan (Pamantik-KMU) in a statement. “It is not the government – who belittled the impact of Honda Cars’ closure – but the strength of workers’ unity that is key in achieving a better separation package in order to start again.”

Most of the laid off HCPI workers, like Christopher Oliquino, 42, have worked in HCPI their entire lives. “A lot of them are 49 or 50 years old and have worked there for decades. Other manufacturers won’t take them in easily,” he said. Oliquino is vice president of LMNH-OLALIA-KMU and has worked in Honda Cars for 25 years.

Despite the victory, Pamantik-KMU decries the closure as a “grave neoliberal attack allowed and amplified by the Duterte regime,” noting that the closure happened just as management promised that no layoffs would occur.

In the months leading up to the February 22 announcement, HCPI reduced its production quota from 35 units per day to 18. In a press statement, HCPI stated that the closure was to “meet customer needs in the Philippines for reasonably priced and good quality products.”

Pamantik-KMU also said that the closure was brought about by a “never ending and worsening global capitalist crisis, as well as a chronic symptom of Philippine society’s semi-colonial and semi-feudal character,” stating that HCPI’s reason for closure was ultimately to “widen its profit margins at the expense of the worker.”

HCPI is owned by Ayala Automotive Holdings Corporation and Rizal Commercial Banking Corporation. According to Trade and Industry Secretary Ramon Lopez, a company which he declined to identify is now looking to take over the Santa Rosa plant located in the Ayala-owned Laguna Technopark.