PGH staff in ‘the line of fire’ amid virus duty 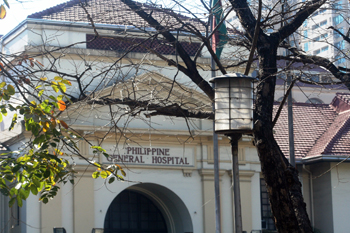 “The problem with the current policy is that we are operating under the premise of very little budget, that’s why there’s a shortage of COVID-19 test kits. And people would have to pay for it first.”

MANILA — Frontline personnel of the Philippine General Hospital (PGH) are not just facing risks of contracting the dreaded new coronavirus disease 2019 (COVID-19), but are indeed in the “line of fire,” according to a university union head.

The national university hospital under the University of the Philippines in Manila (UPM) does not have enough staff, personal protective equipment and supplies, and isolation rooms amid the rising number of coronavirus disease-stricken patients in the country, All UP Academic Employees Union – UPM chapter President Dr. Gene Nisperos told Bulatlat.

When asked about free COVID-19 screening, he said, “It’s limited, they said [PGH], and it’s not needed by everyone. PhilHealth said they are including COVID-19 testing in their insurance program, but it is not operational yet, so patients would have to shoulder the payments first.”

For now, screening is limited to persons under investigation. “Ideally, there should be mass testing, especially for health personnel.”

Last Wednesday, PhilHealth announced that it will be covering the cost of getting tested for the coronavirus disease.

Nisperos noted that nurses, whose daily shift runs for eight hours, are forced to extend up to nine or 10 hours at work. “Health personnel are overworked, with only limited staff covering the large number of patients.”

Citing data from the Philippine Nurses Association, the UPM doctor said these nurses are working triple times their loads.

“They’re [frontline health workers] not only vulnerable, they’re in the line of fire,” Nisperos said.

Makeshift isolation rooms were also made as rooms intended to isolate patients, as well as the hospital’s Intensive Care Units were already used to full capacity, he mentioned.

These logistical problems were attributed to the budget cut which the university hospital saw this year.

“The problem with the current policy is that we are operating under the premise of very little budget, that’s why there’s a shortage of COVID-19 test kits. And people would have to pay for it first,” Nisperos exclaimed.

“[M]oney has always been a rate limiting step simply because [the government] does not want to allocate more,” he added.

For this year, the PGH received a P2.7 billion-worth of allocation from the P4.1 trillion national budget. It was cut by 31 percent or P1.24 billion from its proposed 2020 budget of P4.02 billion.

The PGH earlier proposed to have a P100.26 million budget for the purchase of medical supplies and diagnostic laboratory needs.

“I think it is time to demand for more. What we need is an institutional policy, and if PGH will not take the lead in demanding for more money, nothing will change,” the doctor said.

“The government’s discretionary fund is big; it’s with the Office of the President. When would that be used? When thousands have already died?” he stressed.

As of this writing, the total number of COVID-19 infections in the country is 98, with eight confirmed death, according to DOH.

Currently, there are 153 persons under investigation (PUI) across the country with 47 tallied in the National Capital Region.

“At first, there’s just a shortage of face masks, that’s why PGH [had] encouraged the clerks and interns to bring their own face masks. But when the COVID-19 outbreak started, it became difficult to procure masks. There are no available supplies in nearby pharmacies,” ” UPM USC Representative Habagat Farrales told Bulatlat.

Ferrales mentioned that some traders would sell them face masks for P1,200 for every 25 pieces. Last January, the DOH placed a price freeze on medical supplies, including face masks which should be priced around P1.10 to P8. 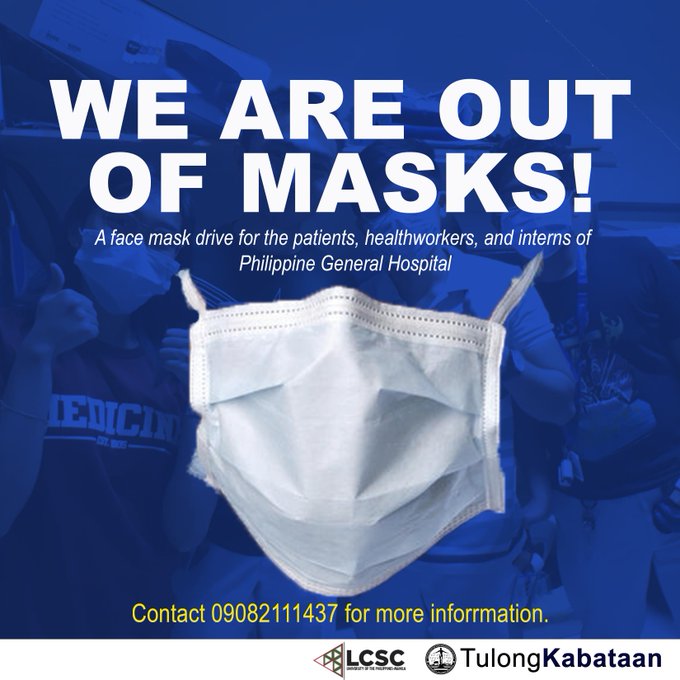 The number of student interns at the premier university hospital is about 300, who cater to about 1,000 patients entering the PGH daily. “That’s how much masks they needed, besides other PGH personnels,” he said.

Ferrales added that most patients also find it hard to source for masks. “Because of COVID-19, many are at risk inside the PGH,” he said.

For those willing to donate face masks, alcohol, tissue and other medical supplies, contact 09082111437 for more information.