Both local government units have undertaken health and socio-economic measures for their constituents, following the declaration of Luzon-wide enhanced community quarantine.

MANILA– Filipinos commended how the local government units of Pasig and Marikina are responding to the coronavirus disease 2019 (COVID-19) pandemic.

While citizens of other areas complain that their local chief executives seem to be ‘missing in action,’ Pasig City Mayor Vico Sotto and Marikina Mayor Marcelino “Marcy” Teodoro have been very visible in providing assistance to their citizens.

Both local government units have undertaken health and socio-economic measures for their constituents, following the declaration of Luzon-wide enhanced community quarantine.

Thank you to our people at the frontlines.

Alam kong pagod na kayo, pero di kayo tumitigil. May God bless you for all your hard work and sacrifice!!!

Marikina also announced that it would start testing for COVID-19 starting next week, after the city has finished setting up a molecular biology laboratory designed for the collection of the specimens. The city would start field testing 50 specimens on March 24.

The two LGUs have also utilized their own social media accounts to provide updates and advisories that could help the public during the lockdown. 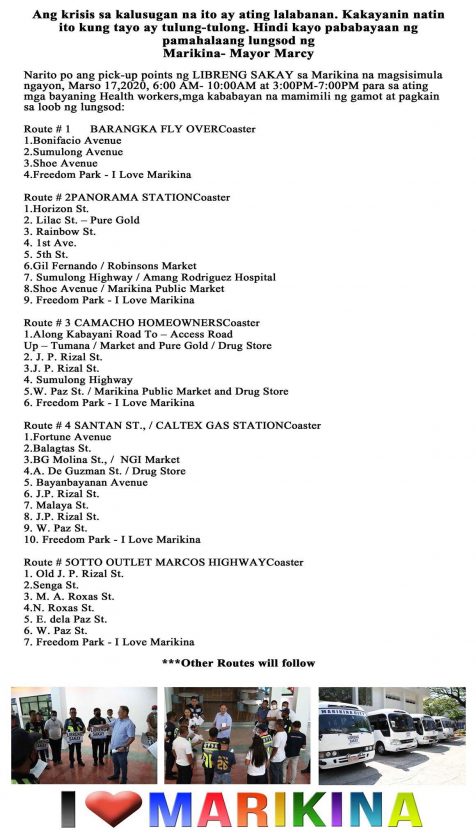 Both cities also prioritized giving food and transportation support to frontliners, and health workers, who are most essential during this outbreak. Sotto also pledged hazard pay, overtime pay and other benefits for frontline workers.

Sotto allotted 400,000 food packs for the citizens of Pasig amounting to P158 million. The food assistance aims to support those unable to earn a living because of the lockdown.

Sotto also said that Pasig City government employees, whether regular or contractual, would get their full salaries during the Luzon-wide lockdown.

Teodoro, meanwhile, announced that no interest will be imposed for those who would be delayed in paying their real property taxes before March 31.

Ironically, Sotto’s actions earned criticism from President Rodrigo Duterte. On a taped Presidential press conference aired March 20, Duterte addressed the nation and called out Sotto for “doing too much.”

“If you go beyond the standards we have set, you are abusing your authority,” said Duterte, warning such action could lead to administrative cases or worse.

Netizens have defended Sotto, calling Duterte unprofessional and petty for singling out the Pasig mayor after he allowed tricycles to operate for the transportation of frontliners. Sotto then has provided bikes and electric buses for health workers and government personnel.

vico sotto: is literally just doing his job
duterte: what you’re doing is too much. don’t go beyond the standards we have set. do not overdo it.

Malacañang really insisted on airing this pre-taped address of the President past 1 am… just so he could tell LGUs to “stand down and abide by the directives of the IATF.” Looks like someone’s allergic to good governance. ?

Since the declaration of Metro Manila lockdown, Duterte has passed the buck on local government units to respond to the needs of citizens. Critics pointed out that the national government response remains wanting.