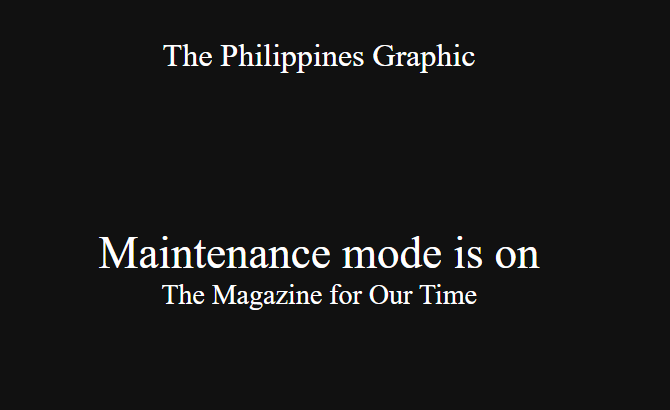 “I condemn in the strongest possible terms those who are behind this crime against free speech.” — Philippine Graphic editor in chief

MANILA– The website of Philippine Graphic, the longest running literary magazine in the country, was hacked with ‘malicious redirect’ today, April 18.

Graphic Editor-in-Chief Joel Pablo Salud said the hack must have happened in the morning. He said they were only able to know of the hacking after a client/viewer alerted their advertising team.

Apparently, the editors and administrators of the Graphic website were unable to notice the hacking because they have been blocked from accessing the site.

Graphic’s websmaster said that the hack was likely a ‘malicious redirect,’ in which the hacker inserts a code to the target side in order to redirect its viewers to another site once accessed.

Graphic later alerted their readers through a Facebook post to refrain from accessing their stories in the meantime as they try to get everything back to normal.

“I condemn in the strongest possible terms those who are behind this crime against free speech,” said Salud.

In an interview with Bulatlat, Salud said he has no idea why the website was hacked. Their webmaster, he added, was able to trace the hacker in Indonesia, after the hacker bounced off his signal to places both here and abroad.

The last post of the magazine was a piece on the local government’s lack of nutrition and heath support to children, as well as pregnant and lactating mothers.

“I really have no way of knowing (why the website was hacked),” said Salud, “The hacker coming from Indonesia does not necessarily mean the hacker is Indonesian. He could be a Filipino troll, who knows?”

“It is just strange that the Public Information Office of Pasig City suffered the same,” Salud said pertaining to the hacking incident of Pasig City PIO’s Twitter account.

While there is no way of accessing the website at the moment, Philippines Graphic will continue its reporting and will be posting their stories on the magazine’s Facebook page.

“There’s a ton of ways to get the stories out there,” Salud said.

According to Salud, the incident was the first cyber-attack against the magazine, but the editors have been personally targeted. Salud himself, admitted that he had experience having his laptop hacked twice, and his posts taken down by trolls.

“I personally have been very vocal about the flaws and failures of several administrations, including this one,” Salud said, adding that some of his critical pieces have also appeared in Graphic.

“While I give everyone a fair hearing, I don’t pull my punches when I see something wrong,” he said.