Arrest of relief volunteers is also an attack on free expression 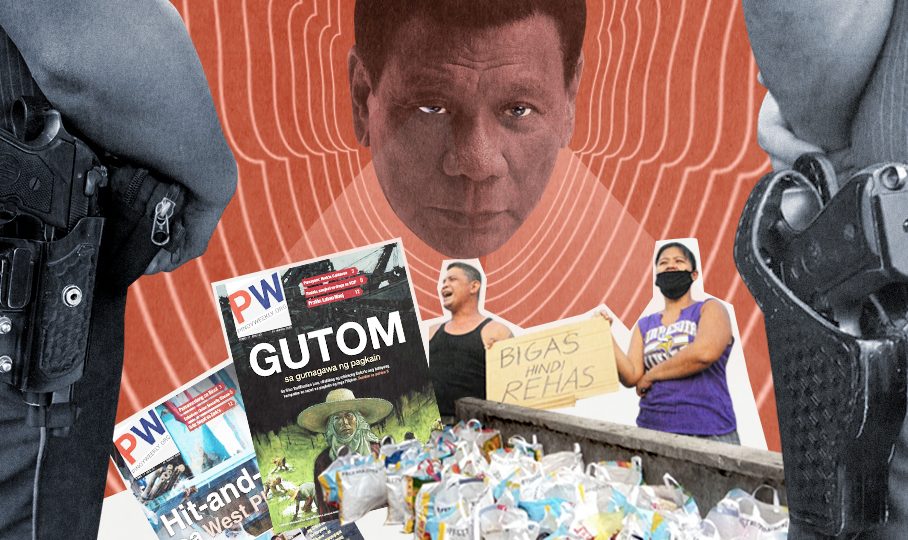 Bulacan police apprehended six volunteers of Tulong Anakpawis-Sagip Kanayunan, along with former Anakpawis Rep. Ariel Casilao, who were on the way to a relief drive in Norzagaray, Bulacan. The manner that the police presented the circumstances of the arrest to the public also had a not-so-subtle message: publishing and distributing materials that are critical of government could now land people in jail.

Based on social media posts made by official accounts of the military and the police, one of the bases for these charges were the copies of Pinoy Weekly, a founding member of Altermidya Network and a multi-awarded alternative newspaper, which were seized from the relief volunteers and misrepresented as “anti-government propaganda materials” as the newspaper bore stories about how the hashtag #OustDuterte trended on Twitter even before the onset of the Enhanced Community Quarantine (ECQ).

To use that article in Pinoy Weekly as the basis for filing sedition charges is absurd and is an assault on the constitutionally-guaranteed right to free expression and press freedom. But it is far from being the only instance of the continuing attacks on these freedoms.

Northern Dispatch (Nordis) correspondents Paola Espiritu and Sherwin De Vera have been red-tagged by troll accounts, branding them members of the Communist Party of the Philippines. The same is the case with Pokus-Gitnang Luzon correspondent Pia Montalban. Other freedom of expression violations have been recorded, involving citizens who merely posted critical messages on social media.

The recent spate of red-tagging and brazen use of authority against media and the people’s growing dissent speak volumes of how the Duterte administration – and its emboldened security forces – are facing the COVID-19 pandemic not only with apparent incompetence, but also with its usual self-serving and despotic brand of governance.

Many experts have pointed out how misguided the Duterte administration’s response is as regards the public health emergency. Instead of offering swift, clear-cut, responsive medical solutions, the state has invariably ramped up its militarist moves. Instead of flattening the curve of the pandemic, the administration’s state forces are bulldozing our fundamental rights.

But the public will not back down and quietly accept this situation. The alternative media is united with the Filipino people in keeping our guard up, and are vigilantly opposing the creeping fascism that the Duterte administration is espousing to cover up its gross incompetence in facing this crisis.

We may be living in abnormal times. But we must continue asserting our rights and despite the shrinking space for public opinion. We cannot allow another creeping pandemic – the affliction of a mounting autocracy – to spread unabated.