You Are Here: Home → 2020 → April → 30 → Website of Baguio-based alternative media outfit under attack 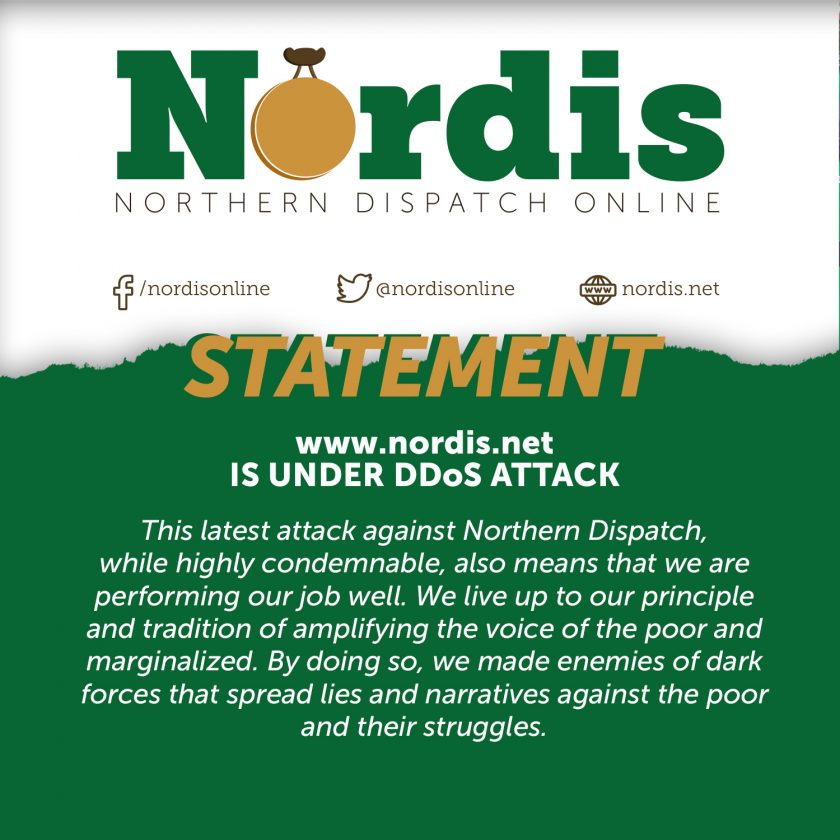 Northern Dispatch believes that the attack is state-perpetrated, noting that the media outfit and their staff members were also subjected to intense red-tagging by military and its army or trolls.

MANILA – The website of Northern Dispatch (www.nordis.net) has been the subject of distributed denial of service (DDoS) attacks since April 11, according to digital rights experts from Qurium.

DDoS is a form of cyber-attack aimed at bringing down a website.

Sweden-based non-profit Qurium, which has provided rapid response to Northern Dispatch, revealed that the botnet attacking the website is composed of machines in over a hundred countries, and plenty of traffic is coming from Libya. The website was down for two days.

The fact that we saw “bots” from Lybia might help us to trace back the attack infrastructure. pic.twitter.com/D720Cnzfvz

. @nordisonline (PH) has received denial of service attacks since the 11th April, almost everyday the last week. Although the botnet is composed of machines in 100+ countries, it was interesting to see plenty of traffic coming from Lybia. pic.twitter.com/dKNiV9sdM9

Northern Dispatch, a Baguio-based alternative media outfit, said in a statement, “This latest attack…while highly condemnable, also means that we are performing our job well. We live up to our principle and tradition of amplifying the voice of the poor and marginalized. By doing so, we made enemies of dark forces that spread lies and narratives against the poor and their struggles.”

Northern Dispatch believes that the attack is state-perpetrated, noting that the media outfit and their staff members were also subjected to intense red-tagging by military and its army or trolls.

Northern Dispatch said the attacks happened during a period when critical reporting on the actual situation is urgent and essential. “Our foes initiated the attack at a time when rights protected under the Constitution are brazenly violated on unprecedented scales under the pretext of a public health emergency,” the media outfit said.

After instituting DDoS mitigation measures, the website of Northern Dispatch is now accessible.

“To the enemies of press freedom and the people’s right to know, threaten us all you want, but we will not be cowed nor silenced,” Northern Dispatch said.

Websites of other alternative media outfits such as Bulatlat, Kodao, Pinoy Weekly and Altermidya were subjected to similar cyber-attacks in 2019.