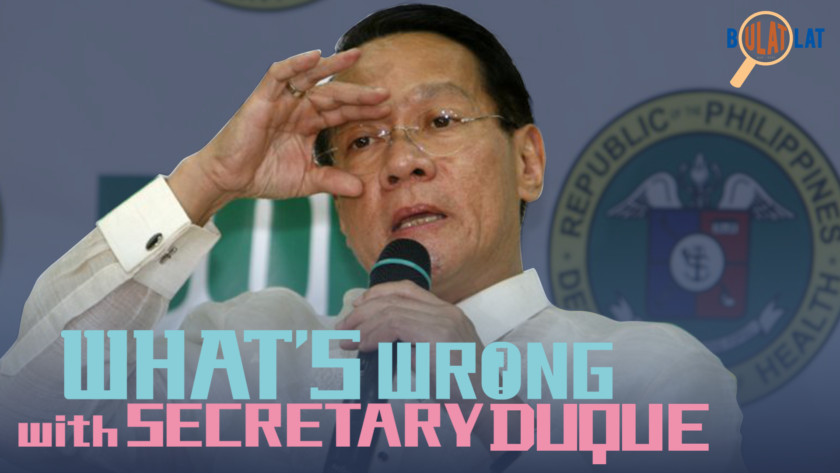 Health Secretary Francisco Duque III, who heads the lead Philippine government agency in the fight against the pandemic, issued inaccurate statements and unreliable data, leaving Filipinos in doubt of his capacity to lead the country out of a public health emergency.

MANILA – The country’s health secretary has been the subject of criticisms over what critics perceive as inept curbing of the spread of COVID-19 in the Philippines.

Health Secretary Francisco Duque III, who heads the lead Philippine government agency in the fight against the pandemic, issued inaccurate statements and unreliable data, leaving Filipinos in doubt of his capacity to lead the country out of a public health emergency.

The lack of clear strategies and decisive action, said health advocacy group Community Medicine and Development Foundation, “has cast aspersion on the agency.”

As it stands, confirmed COVID-19 cases continue rise, as it recently surpassed the 20,000-mark.

Bulatlat has compiled a series of pronouncements of the country’s health department and how it affected the country’s response against the pandemic.

1. PH does not have a poor health system?

Early in the Philippine government’s fight against the pandemic, Duque found himself in hot water over his reaction to the World Health Organization’s pronouncement as the latter expressed concerns over how countries with weaker health system will deal with the virus.

“The countries that have weak healthcare systems are those that are really poor. They are referring to third world countries. We are in a middle-income country. We are not included there,” he said in Filipino.

Coalition of People’s Right to Health co-convenor Josh San Pedro earlier stated that being a middle-income country will not necessarily translate to better health care system.

In 2016, the health department itself said it lacks 15,000 doctors to meet the needs of Filipinos.

2. Mass testing is not simple?

Right from day one, health advocates have been calling for increased mass testing capacity. No less than the WHO itself said that testing, isolation, and contact tracing are the backbone of response against the pandemic while social distancing measures can only reduce transmission and enable health systems to cope.

“You cannot fight a fire blindfolded. And we cannot stop this pandemic if we don’t know who is infected,” the WHO said, “We have a simple message for all countries: test, test, test.”

However, Duque said mass testing is “not as simple as others may want to appear.”

In the earlier months, the Research Institute for Tropical Medicine (RITM) was assigned to serve as the country’s lone testing center. Its capacity, however, was not sufficient.

Read: RITM, the missing piece in the Philippines’ mass testing capacity vs. COVID-19

Due to public pressure, the health department later decided to open sub-national testing centers. However, majority of these are located in Metro Manila, prompting scientists and health advocates to ask if the Philippines has indeed flattened the curve or it merely reached the ceiling of its testing capacity.

Read: Without mass testing, PH not flattening the curve – scientist

3. Asymptomatic virus carriers are not contagious?

In a Senate hearing two weeks ago, Duque said “there is no report or evidence” that will prove that asymptomatic carriers of the COVID-19 virus are contagious. However, in its April 2, 2020 report, the WHO said that while there is no documented case, it “does not exclude the possibility that it may occur.”

Even the health department’s own website said the risk of acquiring the virus from a carrier without symptoms is possible though “very low.”

On its recently published editorial, medical journal New England Journal of Medicine said asymptomatic transmission may be the “Achilles’ heel” of the current strategies to curb the spread of the dreaded virus. This after more than half of the residents of a skilled nursing facility “were asymptomatic at testing.”

The editorial further points out that “asymptomatic persons are playing a major role in the transmission of SARS-CoV-2. Symptom-based screening alone failed to detect a high proportion of infectious cases and was not enough to control transmission in this setting.”

Here in the Philippines, testing and contact tracing remain to be a challenge.

Mass testing, for one, remains way below the government’s own target. As of June 1, 2020, the health department has an average of 8,349 daily tests, a far cry from the 30,000 daily tests that it targeted to reach by the end of May.

Presidential Spokesperson Harry Roque earlier admitted that the country has no program for mass testing for COVID-19. He then backtracked and insisted that “mass testing” is a wrong term, blaming the media for quoting his direct statement.

The Alliance of Health workers recently issued a statement, saying that free mandatory testing for all health workers at least once every two weeks has yet to be implemented. This is coupled with the inadequate personal protective equipment and public hospitals that remain understaffed, forcing health workers to work more than 12 hours a day while enduring low pay and difficulties in mass transportation.

The group said they “cannot blame health workers to resign or leave the country because the DOH and the government force them to do so.”

Filipino Nurses United pointed out that the health department has failed to “establish early COVID-19 infection prevention and control measures,” following the three positive cases that were documented as early as January 30, 2019.

Duque identified the Philippine General Hospital, along with several other public hospitals, to serve as COVID-19 referral centers in the National Capital Region.

Community medicine practitioner and UP professor Gene Nisperos told Bulatlat that while it was a correct move to assign end-referral centers for COVID-19, he is not convinced that it should have been the PGH.

In earlier interviews, Nisperos, also a board member of Commed, said any other hospital that is provided with due resources and equipment can serve as it its referral center while PGH is “the only tertiary hospital that many poor Filipinos can turn to.”

“Worse, some hospitals refused to admit non-COVID patients, which resulted in unnecessary deaths. Thorough investigation on these cases still need to be conducted,” the nurses group said.

While it appears to be a global problem, the high infection rate and deaths among health workers in the Philippines are telling of the grave situation they are in.

The health department earlier purchased one million PPEs for health workers. However, guidelines on the proper use of PPEs was only released in April, three months into the country’s fight against the virus.

Duque was earlier criticized not only for the lack of PPEs but also for overpriced purchases. The president, however, defended him, saying that he does not care if it is expensive and just “go ahead and do something about it.”

Meanwhile, CPRH’s San Pedro, however, pointed out that no implementing rules and regulations were forged since the passing of the Bayanihan Law that stipulates P100,000 and P1 million will be given to frontliners who will be infected by the virus or die, respectively.

This issue was earlier raised in a Senate hearing as health workers who contracted the virus has yet to avail of the financial compensation provided by the law.

Meanwhile, in a press briefing earlier this morning, Duque blamed his subordinates for the delay in the benefits due health workers who are serving as frontliners.

Meanwhile, most hospitals, the nurses group added, relied on PPE donations from private organizations or individuals.

FNU said the health secretary “must be a leader with expertise in public health administration, with pro-people management skills and visionary leadership skills that respect people’s welfare.”

Duque’s most recent slip-up was when he declared that the Philippines is already on its second wave and that it may be gearing towards a third wave now that more areas are easing their lockdown restrictions. This has brought confusion not only to the people who are all eyes and ears on COVID-19 updates but also to government officials themselves.

“What followed was a slew of statements from two DOH officials, two government consultants, a couple of legislators, and the Executive Secretary – all attempting to explain what the health secretary meant,” health advocacy group Commed said.

The health secretary later “clarified” his pronouncement, saying that the country “is still in the first major wave.” Critics, however, were not at all enlightened.

“We would like to remind Secretary Duque that he is the chief of the Health Department which is supposed to be on top of government’s response to the COVID-19 epidemic. If he is issuing statements which are confusing and baseless, he is putting the health and lives of our people in peril,” said Kilusang Mayo Uno chairperson Elmer Labog.

Did the health department get everything wrong?

Nisperos, UP associate professor and a community medicine practitioner, said the DOH has implemented and echoed guidelines issued by the World Health Organization, particularly on physical distancing, handwashing, to name a few.

Though belated, the health department has also bent to strong criticisms to increase its testing capacity by accrediting more sub-national testing centers including the controversial testing center in Marikina, and eventually built quarantine facilities.

Despite all these brouhaha, the health secretary appears to be politically unscathed – at least in the eyes of the Duterte administration. He has even thanked the president for his unwavering trust.

Commed, however, begs to disagree. “No. Secretary Duque must go.”