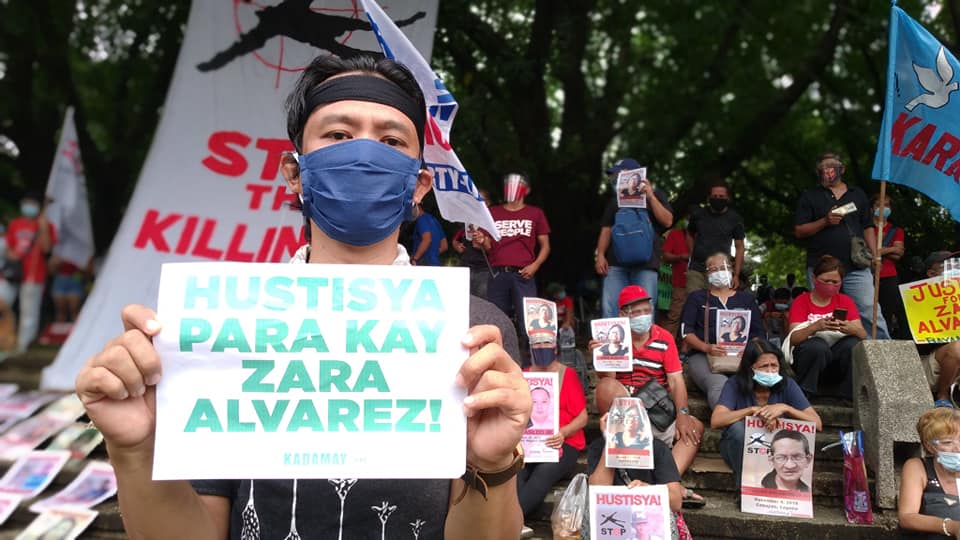 On a rainy night, 39-year-old health worker and human rights defender Zara Alvarez in Bacolod City was shot and killed.

A few days before her fatal shooting, 71-year-old Randall Echanis was stabbed to death by men who, according to witnesses, had been surveilling him for a month.

State security forces are said to be responsible for both crimes.

In the case of Echanis, the actions of the Philippine National Police (PNP) fueled suspicion that the murder was the handiwork of men in uniform. Instead of going after the perpetrators, the police seized the body from the family and issued statements contrary to witnesses’ accounts

The Palace was quick to absolve state security forces. Presidential Spokesperson Harry Roque said, “Blaming state forces as the people behind these murders is unfounded as investigation on the killings of Randall Echanis and Zara Alvarez is now underway.”

Is the accusation really unfounded?

Both Echanis and Alvarez were labeled as “communist-terrorists” and were in fact included in the Department of Justice’s petition to declare the Communist Party of the Philippines and New People’s Army as terrorist organizations. Their names were eventually removed with the justice department admitting it relied solely on reports from intelligence agencies and did not verify the information.

They were arrested and detained for trumped-up criminal charges. Echanis was arrested on Jan. 28, 2008 on charges of multiple murder in relation to the alleged Leyte mass graves. The Supreme Court granted him temporary freedom in August 2009. Alvarez, on the other hand, was arrested on Oct. 30, 2012 and was accused of killing a soldier. She was released on bail in 2014. Their incarceration aimed at stopping them from pursuing their advocacy and the charges were clearly politically-motivated.

Both of them had been highly visible doing development work. Echanis was chairperson of Anakpawis Party-list and a consultant of the National Democratic Front of the Philippines (NDFP) while Alvarez was a Church worker and volunteer for community-based health program in Negros. Both were civilians and unarmed.

In the case of Echanis, forensic expert Raquel Fortun who did the autopsy revealed that there was little indication of struggle, that Echanis was “made to suffer before he was killed.”

Alvarez was one of the human rights defenders who sought protection from the Supreme Court by filing writs of amparo and habeas corpus last year. The Court of Appeals junked the petition without conducting hearings.

Taking all these into consideration, and in the context of Duterte’s counterinsurgency policy Oplan Kapanatagan, there is reason to argue that the primary suspects are state security forces.

In February 2018, Duterte ordered his troops to kill communists “to save on counterinsurgency costs,” and went as far as offering US $500 bounty for each communist killed.

Duterte publicly labeled the communists as the number one threat to national security in his speech on June 22. He also declared communists as terrorists on July 8. Are these not treated as orders from the Armed Forces of the Philippines commander-in-chief? Are these statements aiming to justify the attacks on so-called communist-terrorists?

It is not enough for Malacañang to condemn the killings and wait for an investigation. Duterte himself must retract his earlier statements and declare unequivocally that there is no policy to kill activists. He must, at the very least, allow United Nations experts to conduct their own independent investigation.

At this point, mere promises of investigation from the justice department do not offer hope as hundreds of previous cases of extrajudicial killings have not been resolved.

The fight for justice, clearly, cannot be left to the police and the courts, as these institutions play a role in the perpetuation of the culture of impunity. The bloodshed in the Philippines calls for international condemnation and action.