You Are Here: Home → 2020 → September → 11 → Hostaging The Dead: An emergent trend in the Philippine state terror and war profiteering under Duterte

Hostaging The Dead: An emergent trend in the Philippine state terror and war profiteering under Duterte 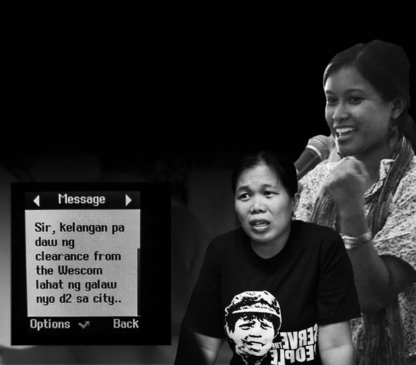 Under Rodrigo Duterte, the horrendous act of taking dead bodies as hostages seemed to have become part of the military and police’s standard operating protocol. It happens when they deny the remains of alleged armed leftists from claimant families unless the latter has been co-opted.

Hunting for bounties in a war for profit

Hostaging of dead bodies is more likely to happen when state forces insist that the slain were high-value targets. They need families to confirm their claim because poor intelligence does not allow them to do so. One only needs to be reminded of how many times former New People’s Army spokesperson Gregorio “Ka Roger” Rosal was claimed dead by the AFP, only for us to learn that he died in June 2011 due to a heart attack. A more recent case of false intelligence is the arrest of Baltasar Saldo in Capiz who was mistakenly identified as a commander of the NPA. The preposterous accusations of supporting the armed left leveled against civilian government critics are also a clear indication of the poor quality of intelligence, as well as the fascist mindset, of the Philippine armed forces.

The Duterte regime deepened the “mercenary tradition” accused by its critics to the Armed Forces of the Philippines and the Philippine National Police. He boasted last May 2020 that a reward of Php2 million shall be given to anyone who would kill or capture a top communist leader. Under his presidency, “anti-insurgency efforts” turned into a race of bounty hunters employed by war profiteers. Critics suspect that Duterte uses his bloated confidential and intelligence funds to target his enemies, including not only the armed left but also the unarmed opposition and progressive movement. Meanwhile, his propaganda machine perpetuates anti-communist hysteria to justify the funneling of state funds to militarization and such other appropriation that we might label as executive “pork barrel”.

The Southern Tagalog people are witnesses to a series of dead-body hostaging in the past two years. In June 2019, the remains of Victor Alcos and two other individuals were hostaged in Mindoro, because the 203rd Brigade required the claimants to recognize him as “Bonifacio Magramo”, the alleged secretary of NPA Subregional Military Area 4E. In November 2019, the 80th Infantry Battalion killed the unarmed Ermin Bellen and two others in an apartment in Antipolo justifying their crime by claiming that he was “Armando Lazarte”, the alleged secretary of NPA’s Subregional Military Area 4A. In August 2020, the families of Dioscoro Cello and three others, who were killed in a clash in Laguna, were forced to play “hide-and-seek” with the police only to know that their bodies were in the hands of PNP Region 4A all along.

On September 3, 2020, five alleged NPA members were slain by the 3rd Marine Brigade at Brooke’s Point, Palawan. The marines were quick to identify the fallen as high-value targets. One of them, Noel Siasico, was identified as “Ka Celso”, a supposed leader of NPA’s Bienvenido Vallever Command. Meanwhile, Andrea Rosal, a former political detainee, and daughter of Ka Roger, was also among those killed. The two carried a combined bounty of Php10.6 million for their neutralization.

But, mercenary greed knows no limit: The marines also identified one of the slain as “Bonifacio Magramo”, who the army claimed to have killed in Mindoro last year as we have noted. A Php5.4 million bounty was placed on his head.

The grieving families immediately arranged their travel, health, and claim requirements. They kept in touch with local authorities before flying to the island last September 5, hoping that early coordination can expedite the retrieval while ensuring COVID-19-related health measures.

That this is clearly another case of dead-body hostaging is demonstrated not only by the huge amount of bounty to be claimed by the marines but also by the tortuous delay in the turnover of the remains. AFP’s Western Command headed by Lt. Gen. Erickson Gloria interfered to have the claimants “quarantined” in a hotel for fourteen days. They were here surrounded by uniformed personnel and suspected non-uniformed surveillance operatives. Their movement required permission and clearance from the military. The opposite happened to the family of a marine soldier who was also killed in the “clash” as his remains were promptly delivered to them.

The fascist general can certainly arrange the prompt turnover of the NPA bodies to their families especially since Palawan health protocols allow a seven-day leeway for emergency trips, but he wanted them to be treated like crime suspects instead. These actions do not only constitute abuse of authority and civil rights infringement, but also a violation of civilian supremacy.

The families continue in their appeal to and cooperate with local authorities to immediately retrieve the bodies.

By hostaging the remains of their alleged enemies, the AFP and the PNP prove to be far worse than private terrorists whose horrendous crimes usually end when their victims are already dead. With state terrorists, even the dead are held captive; and the poor families race against time not to save lives, but to provide proper burial before the remains are putrefied.

Rightists may argue that “this is the nature of war;” that by taking up the cause of the revolution, NPA members have already sealed their fate. They cannot expect anything more than this treatment in choosing a “cursed life” – and a “cursed death”.

But civilized nations have also established international humanitarian principles governing the conduct of armed conflicts. In our case, the most relevant is the duty of belligerent forces to the humane treatment of the dead, and the immediate return of their remains and effects. In other words, humanitarian sentiment should transcend enemy lines. Also, even if we assume that the families of the slain share in the beliefs of their fallen relatives (which is not always the case), they are still Filipino citizens – and non-combatants – entitled to rights and freedoms.

The rightist argument, therefore, is nothing more than a lame excuse for fascist savagery. Our ancestors have fought hard for our freedom and sovereignty because they were certain that we can independently build our civilization on the foundation of democracy, social justice, and human rights – principles that were enshrined in our constitution. As Filipino citizens and co-inheritors of this tradition, we are aggrieved in learning that the republic’s armed forces who wield monopoly in the use of violence purportedly to serve and promote our interest operate in such savage and criminal ways.

The police and military could have taken greater care and given special assistance to the families of the fallen fighters. The “whole-of-nation” approach to “winning the hearts and minds of the people” boasted by Duterte’s militarist junta could have appeared to be more successful with such semblances of benevolence; although, of course, what the people aspire for is a realm of peace based on social justice, democracy, and national freedom. But by turning the remains of their slain enemies to hostages, the regime and its state forces have only demonstrated their inhumanity. ### (Bulatlat.com)

Kobi Tolentino is the current Spokesperson of Anakbayan Southern Tagalog. He is an advocate of genuine agrarian reform, national industrialization, and freedom from imperialist control and dictatorship.