You Are Here: Home → 2020 → September → 15 → Not enough protection and care for teachers amid the pandemic

Not enough protection and care for teachers amid the pandemic

Public school teachers spend for their basic protection such as alcohol, face masks, face shields and gloves. The Department of Education admitted that there is no budget allocated for the hospitalization of teachers who will be infected by the virus.

MANILA – Fruits, turmeric and alcohol worth P2,000. These were the kind of assistance given by the Department of Education to the three public school teachers in Cebu City after being exposed to a parent who tested positive for COVID-19.

According to the Alliance of Concerned Teachers (ACT), the three teachers, who were exposed to a COVID-19 patient during the school’s distribution of modules on Aug. 18, asked for an isolation area but the Schools Division Superintendent (SDS) was not able to provide one.

The SDS claimed that the three were offered an isolation facility by the barangay but they refused. It added that the use of the school as a quarantine facility had already been stopped as per a directive from DepEd Region 7 Director.

The teachers revealed, however, that they were not offered an alternative facility, and that the directive from the regional director came a week before the Palace announced DepEd’s permission to use schools as isolation centers until December 2020.

Such incident and many others, according to ACT Secretary General Raymond Basilio “prove just how weak and insufficient DepEd’s mechanisms are to ensure the safety of personnel and assist them in times of dire need.”

Basilio said public school teachers are left to fend for themselves and rely on one another’s support during this time of crisis.

In Tarlac, Basilio said fellow teachers pitched in for the expenses of their co-teacher who was infected with COVID-19.

Public school teachers spend for their basic protection such as alcohol, face masks, face shields and gloves. The Department of Education admitted that there is no budget allocated for the hospitalization of teachers who will be infected by the virus.

ACT is pushing for the allocation of budget for the health and welfare of the education personnel as the classes for the school year 2020-2021 will begin on Oct. 5.

During its virtual briefing last month, the DepEd said public school teachers will be provided with an annual medical check-up worth of P500 ($10) and World Teachers Day incentive worth of P1,000 ($21). Those who come to work during the enhanced community quarantine (ECQ) and modified ECQ period will also be entitled to hazard pay worth P500 ($10)per day under the Administrative Order No. 26.

The education department said they are coordinating with the Employees Compensation Commission, PhilHealth and the Government Insurance System for benefit packages in case a teacher may need treatment, hospitalization, in-patient care and COVID-19 testing.

ACT said that these are just not enough.

Not even minimum health requirements

Basilio said there is no provision for disinfectants, alcohol, face masks and face shields or even personal protective equipment for the education personnel. 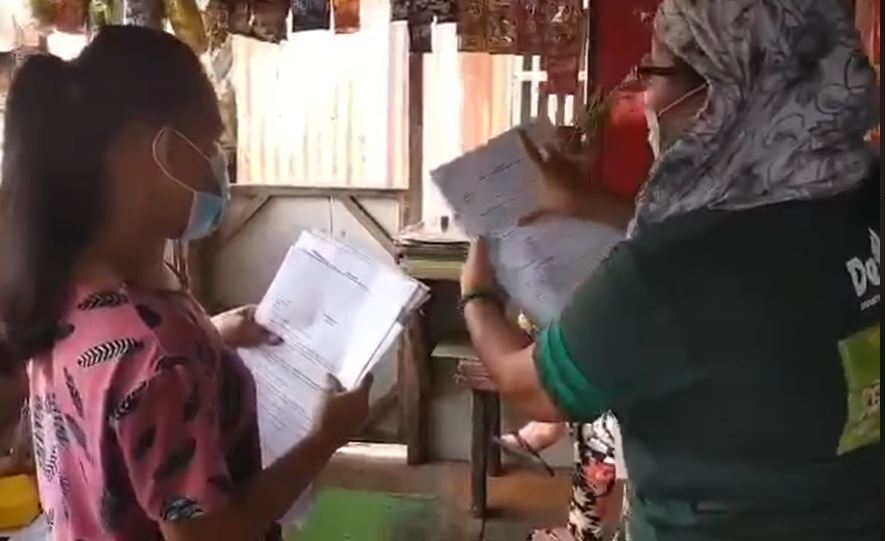 Basilio said that even basic hand washing is a problem as there are schools that do not have regular water supply.

“We just have to make sure that we have stored enough water in the tank,” he told Bulatlat in an online interview.

Gelangre said they raised funds to cover the expenses for the minimum health protection for their teachers and other employees. They bought foot baths and will purchase sprayers to disinfect the buildings.

Gelangre also said they redesigned the school’s gate for the safe entry and exit of teachers and parents who will get the modules from the school. He added that they have also worked with the local government for the distribution of modules to prevent teachers from being infected.

“Teachers are frontliners too. They should be protected,” he said, adding that DepEd should also cover the hospitalization of teachers to help them with financial burden.

Helene Dimaukom, a special education teacher from the Canizares National High School in Cotabato City said they also have to spend for their face masks and alcohol.

She said she fears contracting the virus as they have to deliver and retrieve the modules from their students. She said that a teacher from Sultan Kudarat has already died of COVID-19.

But even with the dangers of being exposed to the virus, Dimaukom said they need to do their job as teachers. “No one can do the work for me. So I just leave my fate to God,” she said in an online interview with Bulatlat.

Teachers are not even entitled to paid sick leave if they get infected by the virus.

Public school teachers have a proportional vacation with pay for the months of April and May when there are no classes. Basilio said teachers should be given leave credits as these are not ordinary times.

Memorandum Circulars 8 and 10 released by the DepEd and the Civil Service Commission grant sick leave for teachers taking a 14-day quarantine. However, if the teacher will get sick beyond the 14 days, it will be considered as leave without pay.

Basilio said that quarantine alone would take 14 days and another 14 days to recuperate, depending on the severity of the virus before an infected person would be declared as clear from the virus.
“It’s a double whammy. You will have to spend for your medication and you have no salary,” Basilio told Bulatlat in an online interview.

According to ACT, the government should fund the teachers’ hospitalization and treatment as mandated by Republic Act 4670 or Magna Carta for Public School Teachers.

Section 22 of the Magna Carta for Public School Teachers, states that “Compulsory medical examination shall be provided free of charge for all teachers before they take up teaching, and shall be repeated not less than once a year during the teacher’s professional life. Where medical examinations show that medical treatment and/or hospitalization is necessary, the same shall be provided free by the government entity paying the salary of the teachers.

Assistant Minority Leader and ACT Teachers Party-list Rep. France Castro said that the DepEd must ensure that this provision of the law is “met as plans to reopen schools amid the COVID-19 pandemic start.”

Castro. a former public school teacher, said that since the enactment of the Magna Carta for Public School Teachers in 1966, this provision remained underfunded and placed under PhilHealth.

“Though there are services offered by PhilHealth, this clearly does not meet RA 4670’s mandate of free health care for public school teachers as PhilHealth is not free but in exchange for monthly contributions,” Castro said.

Campaign for welfare of teachers

Basilio said that ACT has been asserting the rights and welfare of teachers in the time of the pandemic and the group has seen some hope.

According to Vladimir Queta, president of ACT NCR Union, the NCR office of DepEd has ordered the implementation of health measures to ensure education personnel’s safe back-to-work.

This is after the virtual dialogue between the ACT NCR Union and the DepEd NCR Regional Director Malcom Garma on Aug. 21.

A regional memorandum was released on Aug. 26 reflecting significant preventive measures such as health screening by medical personnel, provision of PPEs, constant health monitoring, and the establishment or setting up of school clinics. Queta said to ensure that this will be implemented on the ground, their union members are now going around the schools.

Basilio commended DepEd NCR for heeding the demands of the teachers. He said that the DepEd Central Office should “emulate this in the spirit of protecting education workers’ welfare.”

Basilio added that similar mechanisms should also be in place in the provinces.