MONEY HEIST: Smoke and mirrors in the 2021 proposed national budget 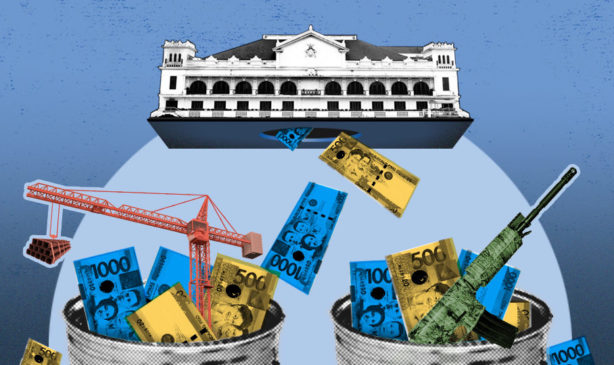 THE NATIONAL BUDGET reflects an administration’s priorities. Pres. Rodrigo Duterte stated in his 2021 budget message: “The national budget of P4.506 trillion that we are proposing for fiscal year 2021 is focused on our greatest priority of the moment – to sustain and strengthen government efforts in effectively responding to and recovering from the COVID-19 pandemic.”

However, a deeper analysis of the proposed budget would show that such statement is far from the truth. Scrutinizing the Duterte administration’s proposed 2021 national budget – effectively the last budget proposal for its term – reveals how it scandalously prioritizes funding for the upcoming national elections and sets aside billions for its favored generals over funding an ample response to the raging pandemic.

The P4.5 trillion proposed 2021 national budget is about 10 percent higher than the current P4.1 trillion budget. However, the budget documents show that only P2.7 trillion will be financed by the government’s revenue, including taxes. The rest? This will be footed by upcoming loans.

Government’s fiscal managers still proposes that the Philippines pay a total of P1.79 trillion in foreign and domestic debts (P531.5 billion in interest payments, P1.26 trillion in principal amortization). This is despite various statements from international funding institutions, including a joint statement by the G7 Finance Ministers back in April calling for a “time-bound suspension” on bilateral debt service payments for poor countries in light of the coronavirus outbreak.

The huge amount for debt payment, in fact, could have been allotted instead to funding immediate needs for the COVID-19 response, according to the Makabayan Coalition.

The Supreme Court declared the Priority Development Assistance Fund (PDAF) – or pork barrel in common parlance – as unconstitutional in 2013. Legislators however have been repeatedly exposing how the pork barrel system remained intact over the years, albeit in a hidden manner.

Yet it seems that the Duterte administration has had enough of this hide-and-seek pork barrel game. In a rather obvious manner, it revived the much-reviled system with the same mechanisms under a different name, and under different hands.

From PDAF, critics dub the new pork barrel as the “generals’ pork.” Why? Because it is essentially embedded in the budget for the National Task Force to End Local Communist Armed Conflict (NTF-ELCAC), and unlike PDAF, legislators are not the ones set to identify the projects that will be funded by this lump sum but rather generals who head the said task force.

Opposition legislators were quick to spot this brazen attempt to revive the pork barrel system, as the NTF-ELCAC is set to receive a 2,969 percent increase in its budget – from P622.3 million in 2020 to a whopping P19.1 billion in 2021.

Bulk of this P19.1 billion budget, or P16.4 billion is lodged under the “Allocation to Local Government Units” under the “Support to the Barangay Development Program of the [NTF-ELCAC].”

The provisions governing these funds sound eerily familiar: the P16.4 billion budget “shall be used for the implementation of various support programs of the [NTF-ELCAC] for the cleared barangays.. provided that each cleared barangay shall be allocated with an amount not exceeding P20,000,000 to be used for the following projects: (i) farm-to-market road;(ii) school building;(iii) water and sanitation system;(iv) health stations;(v) electrification; (vi) agricultural, livelihood and technical vocational trainings/projects; and (vii) assistance to indigent individual or families in any of the following forms of assistance: (a) medical; (b) burial; (c) transportation; (d) food; (e) cash for work; and (f) educational.”

This menu of projects are starkly similar to the “hard” and “soft” projects previously funded by PDAF. But now, it’s not legislators who are empowered to use these funds. The provisions state that it is the NTF-ELCAC, in coordination with the Department of Budget and Management, that will issue guidelines on the release of the said funds.

Initial data released by the NTF-ELCAC shows that about 822 barangays in the Philippines are eligible for the P20-million fund, and many of these barangays are from Davao region, including a barangay located in the district of the president’s son, Rep. Paolo Duterte.

National Security Adviser Hermogenes Esperon, vice chair of the NTF-ELCAC has since defended this budget, saying that the projects that will be bankrolled by the Barangay Development Program will still go through congressional scrutiny, and will not be used to influence the upcoming national elections, since the targeted barangays are not even “vote-rich.”

“Much has been said but not much has been made clear. Gen. Esperon has wasted so much time throwing the same accusations against the Makabayan bloc, but he has yet to shed light on where exactly the P16.44 billion funds they are asking would go,” Bayan Muna Rep. Ferdinand Gaite said.

“Another question which the NTF-ELCAC is yet to answer is why they are appointing themselves the sole approving authority for the release of these funds. Since when did they have the power to oversee each and every department and have control over the release of their budget? This is such an immense power that they are giving themselves,” Gaite added.

There are more red flags in the other parts of the proposed 2021 national budget.

During the opening of the Congressional hearings on the proposed national budget, Gabriela Rep. Arlene Brosas said that that P1.1 trillion proposed infrastructure budget for next year is filled with “parked” pork – lump sums that seem to be reserved to fund infrastructure projects that have yet to be identified.

During the budget briefing by the Development Budget Coordinating Council last September 4, Brosas questioned why some P397.22 billion, or 60 percent of DPWH’s total budget, are lump sum funds lodged in the DPWH Central Office without any breakdown.

Brosas noted that the said amount is even three times bigger than the P131.7 billion-budget for the Department of Health for 2021, which she emphasized as clearly reflecting the national government’s “mispriorities.”

During the hearing, Department of Budget and Management Secretary Wendel Avisado said that the said lump sum will eventually be broken down into line items. However, Brosas found the said explanation wanting.

“This ‘parked pork’ could’ve been enough to build additional public hospitals and health centers especially with the current sorry state of our healthcare system. But the government left this huge amount without any item under DPWH…This lump sum for the DPWH Central Office points to the persistence of pork funds amid the COVID-19 pandemic, with the blessing of no less than the President,” Brosas said.

Apart from possibly being a conduit for pork and corruption, she also assailed the fact that the whole infrastructure budget for 2021, pegged at P1.1 trillion, is about 545 percent higher the health budget.

Despite promising to fund essential needs to survive COVID-19, measly amounts were lodged for programs that directly respond to the pandemic. In fact, more funds were allotted in the country’s military and police departments, a move that critics say will even worsen the country’s human rights situation. Instead of being on a “recovery mode,” the 2021 proposed budget according to critics, is on “attack mode.”

There is no clearer way to show this than by comparing the budget for health and the military.

The budget for the Health Facilities Enhancement Program – the Department of Health’s (DOH) program for the improvement of public hospitals and medical facilities will decrease from the current P8.3 billion down to P4.7 billion in 2021. At the same time, essential programs under the health department, including the “health systems strengthening program,” the “epidemiology and surveillance program,” and the “health emergency program” will also suffer hefty cuts (See table). 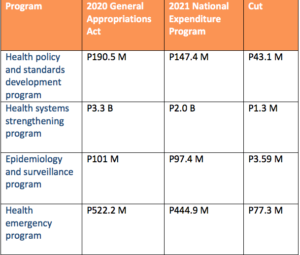 For personal protective equipment (PPE) for medical frontliners, only P2.7 billion was allotted, which only translates to 2 million PPE sets.

Antonio Tinio, former legislator and president of ACT Teachers Partylist, noted that ramping up the funding for defense and the police signals the intensification of attacks against the public.

“In the face of the gravest health crisis brought about by the pandemic, what we get is more funding for state-perpetrated attacks,” he said.

“The people must strongly call on the Duterte administration to reallocate the funds for militarization, pork barrel, and corruption to programs that will address the immediate needs of the people amid the pandemic – healthcare, economic aid, and immediate relief,” Tinio ended.