Making a killing off nickel mining in Palawan 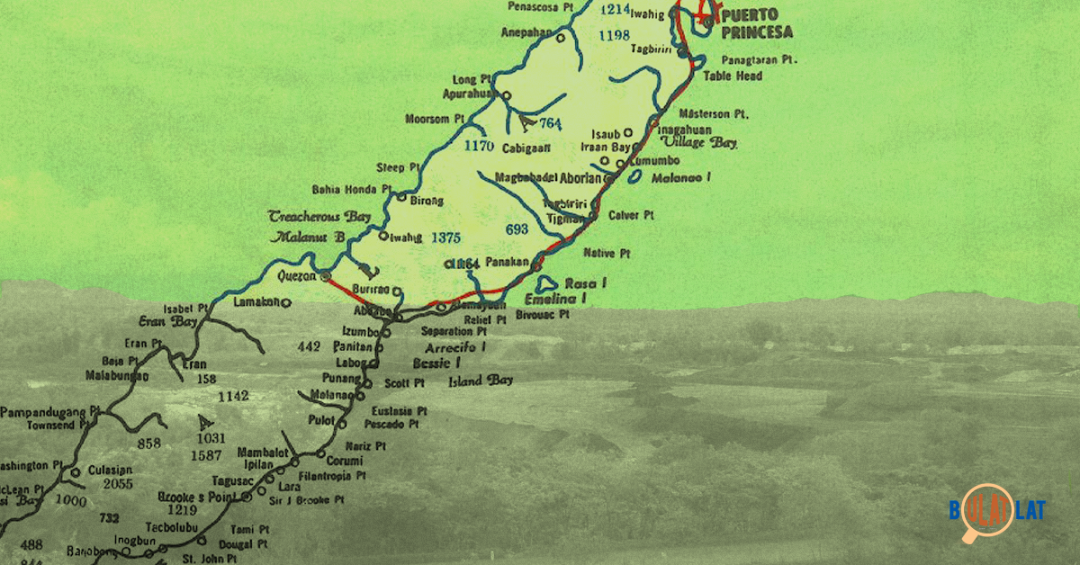 These companies represent the last link in the global supply chain between Philippine natural resources and foreign markets. Meanwhile, Filipinos are kept out of any profits and instead get grief, disease, and harassment thrown their way.

SANTA ROSA, Laguna — There is little doubt that the Philippines is one of the richest countries in the world in terms of natural resources and mineral potential. The country ranks thirs in gold deposits, fourth in copper, fifth in nickel, and sixth in chromite; and yet, such mineral wealth does not translate to wealth for the common Filipino.

In a semi-feudal economy like the Philippines, natural resources are not transformed by local industries to create raw materials. Instead, these are exported by foreign subsidiaries to overseas processing plants, to be sold back to the country as finished goods. The only winners in such a system are foreign corporations and their local business partners.

No industry exemplifies this more than mining, where almost all firms are in some way owned by a foreign entity. Nickel production, in particular, remains one of the country’s top mineral exports; in 2019, it was valued at P63.71 billion (US$ 1.32 billion), P19.32 billion (US$ 399.31 million) of which went to exports. Almost all of these exports went to Japan (PHP 19.23 billion or US$ 397.63 million).

The province of Palawan is home to some of the country’s largest nickel mines. It is also home to a storied history of environmental destruction, imperialist plunder, and people’s struggle. 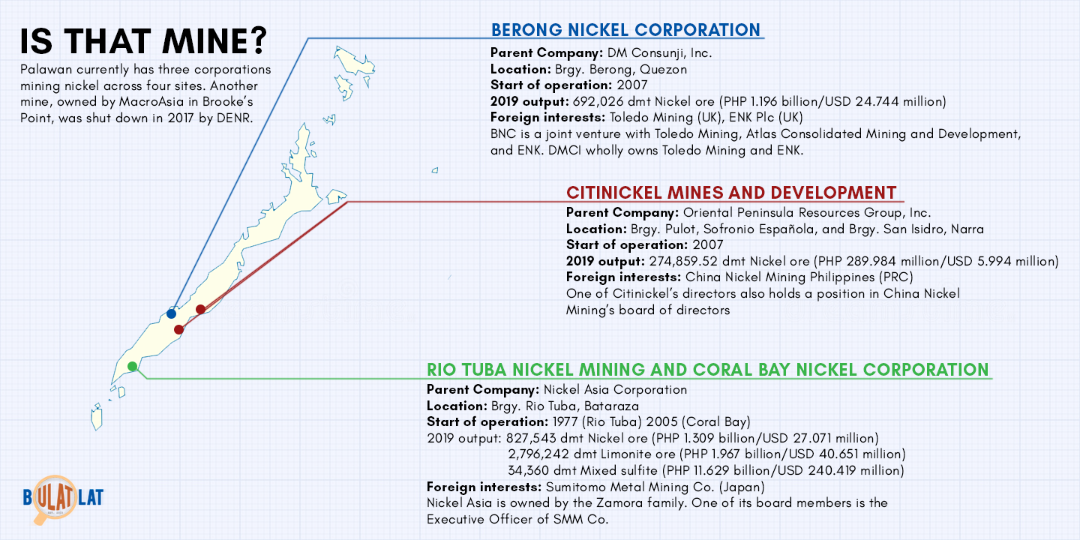 Nickel production in Palawan constitutes roughly 25 percent of total nickel production in the country. In 2019, the mining industry in Palawan P 16.39 billion (US$ 338.32 million) off nickel and related metal ores alone. Millions more were made from by-products like crushed limestone, milk of lime, and hydrated lime.

Three corporations currently dominate nickel production in the province: Rio Tuba Nickel Mining, Berong Nickel, and Citinickel Mines and Development. Almost all of their nickel goes towards export to parent companies and business partners in China and Japan.

Citinickel has the most holdings of the three. It owns two mines in Palawan, in barangay Pulot, Sofronio Española, and in barangay San Isidro, Narra. Citinickel is a subsidiary of Oriental Peninsula Resources Group, Inc., an investment holding company specializing in mining. One of its directors, Fernando B. Esguerra, also holds a position in China Nickel Mining Philippines Corp.

Rio Tuba Nickel has operated a mine in barangay Rio Tuba, Bataraza since 1977. Now, it supplies nickel, limonite, and cobalt to its sister company, Coral Bay Nickel Corporation. Both are owned by Nickel Asia Corporation. NAC is owned by the Zamora family and by Japanese firm Sumitomo Metal Mining Co., Ltd. In 2017, San Juan Rep. Ronaldo Zamora, brother of NAC founder and Chairman Manuel Zamora, worked against Gina Lopez’ appointment to the DENR.

These companies represent the last link in the global supply chain between Philippine natural resources and foreign markets. Meanwhile, Filipinos are kept out of any profits and instead get grief, disease, and harassment thrown their way.

According to indigenous organization Pinagtibukang Kaundang-undangan it Palaw’an (PKP), Citinickel obtained their Memorandum of Agreement with the indigenous Palaw’an community by “violating indigenous rights.” PKP also claimed that Citinickel failed to honor the agreement by not paying stipulated royalties or compensating for damages to the environment.

This included a 2014 silt spill which resulted in 14 days of pollution for the Pasi and Pulot Rivers, two important water sources for the residents of Sofronio Española. To this day, both rivers are considered under risk of dying.

The same case can be found in the Rio Tuba mine, which operates primarily in Mt. Bulanjao. According to an Ancestral Land/Domain Watch (ALDAW) Network report in 2009, continued mining operations in Mt. Bulanjao will “irremediably damage the best conserved forest in the southern tip of Palawan, with predictable adverse consequences for the food production capacity of both indigenous Palaw’an and migrant farmers’ communities living at the foot of this mountain range.”

Operations in Rio Tuba have also resulted in widespread environmental damage. Environmental organization Kalikasan People’s Network for the Environment (Kalikasan PNE) said that operations by Rio Tuba and Coral Bay have poisoned the Togupon River, which runs through these companies’ mining operations, with carcinogenic chemicals.

This cycle of indigenous people’s rights violations and environmental destruction remains supported by successive governments, including the present Duterte administration. Duterte’s focus on the armed conflict has only exacerbated this problem.

Human rights group Karapatan notes that from July 2016 to April 2020, 14 environmental activists and 59 indigenous people have been victims of extra-judicial killings. Most of these killings were preceded by long periods of state-sanctioned harassment and red-tagging courtesy of the National Task Force to End the Local Armed Conflict.

But despite these setbacks, the people’s struggle continues. People’s initiatives against intrusive mining in Romblon and Oriental Mindoro have successfully resulted in moratoria against mining operations in their respective provinces.

The same is true in Palawan. Pressure from local and international organizations has resulted in the Department of Energy and Natural Resources to cancel Ipilan Nickel Corporation’s permit to operate in 2017; a decision that stands until today.

Ipilan Nickel, a subsidiary of Global Ferronickel Holdings, had exclusive rights to mine nickel, chromite, iron, and other mineral deposits in 2,835 hectares of land in Brooke’s Point, Palawan. It used to export its products to Australia and China, through its partner Guangdong Century Tsingshan Nickel Industry Company, Ltd., a ferronickel smelter in Guangdong, China.

Some activists see another path in the struggle for environmental justice. For a time, Rona Jane Manalo was involved in the indigenous people’s struggle for land and rights in Mindoro and Palawan. However, seeing no other recourse in winning fundamental change, she decided to take another path: she took up arms and joined the New People’s Army.

On September 3, 2020, Rjei lost her life after an unfortunate encounter in Brooke’s Point, Palawan. It took her father almost a week before he was able to bring his daughter home. But the struggle that Rjei fought in, and the ideas that drove her to protect those who couldn’t protect themselves continues on.