“We must not stop because our aspirations then haven’t been realized yet. We need to continue fighting for freedom and true progress for the Filipino people.”

MANILA–Unlike the past years, September 21 #NeverAgain protests this year were anticipated with relatively less elderly participants due to the health risk brought by the COVID-19 pandemic. Still, several of them showed up in the front lines of the contingent at UP Diliman, University Avenue. Occupying the first three layers of protesters, the Martial Law survivors have once again proved that there was never real justice for all the atrocities committed during those dark times of military rule. 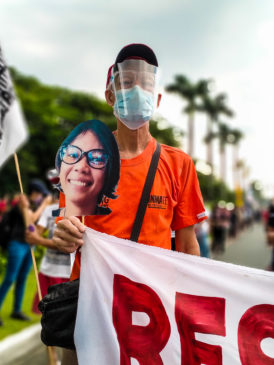 Among those who braved joining the physical protest was ka Felix Dalisay, 68, member of Samahan ng Ex-Detainees Laban sa Detensyon at Aresto (SELDA). He was a political prisoner of the Marcos regime in 1973.

“I experienced all forms of torture but the worst was when I was taken to Libis, Quezon City. That time, Libis was still a wooded area. I told them I just needed time to pee, but suddenly I felt a strong gunshot to my left ear which was the reason why I became partly deaf,” Dalisay recounted.

“Every 21st of September, we are reminded of how justice remains frail up until today, after all that has happened to us. Marcos and his cronies who were responsible for the torture, rape, salvage, murder, and extra-judicial killings among our ranks were never held accountable for their crimes,” he added.

Like ka Felix, Meddy De Jesus, despite the health risks, decided to participate in the protest action yesterday.

“We must not stop because our aspirations then haven’t been realized yet. We need to continue fighting for freedom and true progress for the Filipino people,” she said.

De Jesus has been a member of human rights group Karapatan – Southern Tagalog since 1984. She became an activist in 1974 and was a Benedictine nun back then. She was assigned to Pampanga and that was when Carlo Tayag, a Benedictine priest who belonged to the Congregation of San Beda College Manila, disappeared.

“Carlos was our friend and he often went to Pampanga. In 1977, after coming from a meeting where we were already trying to form the Task Force Detainee for political prisoners, he was never found again. His mother and his co-priests and brothers of San Beda tried to find him but to no avail,” De Jesus recalled.

Four years later, the Marcos regime staged a legal veneer to project a win for the elections of the Interim Batasang Pambansa in 1978. There was a massive indignation after, because the people knew it was a fake election orchestrated by Marcos to remain in power.

“After that incident, I went full time with the Task Force Detainees until 1984. We were visiting political prisoners especially in Northern Luzon and Mindanao. After that, I did other work with the farmers”, she said.

Sitting on a wheelchair inches away from her was his husband, Peter Gonzales, 76, or more known to many as “Tata Pido.” He was already a youth activist in the 1970s, before Marcos declared Martial Law.

“I was a member of Kabataang Makabayan during my youth. I was the only youth member from the ranks of the fisher folk. Most of the others were farmers and students. During that time, I was also the oldest member at the age of 23; the rest were in high school, with the age of 17 or 18 years old”, Gonzales shared. 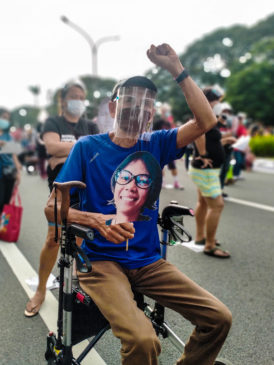 He still vividly remembers his most heartbreaking experience during the Martial Law. Four of his relatives were kidnapped and murdered by state forces assigned in Quezon. He said that one of them was not even an activist.

“We received a tip and eventually discovered their bodies in a nearby house. They were brutally stabbed to death, skewed like they were pieces of meat, buried in the pit. Not so long after this, my childhood friend Consultre, who was also an activist member of Kadena, disappeared. Until today, she was never found,” Gonzales shared.

After losing comrades, family members, and loved ones, he was resolved on being an activist until his very last breath.

“In 1986 when Marcos was overthrown, we thought it was over and that there would be real change. But after Cory Aquino’s military murdered then political prisoner Rolando Olalia of Kilusang Mayo Uno and Partido ng Bayan, we knew that the dark days were not completely over,” De Jesus said.

Contrary to the history books’ timeline of the Martial Law era, human rights violation continued to take place even after the People Power uprisinf of 1986. Killings of activists by military state forces never stopped. These atrocities were not discussed publicly enough, but they were real.

“During Gloria Arroyo’s administration, I was shot. Luckily, I recovered, but that is not a reason for me to stop. They shot me because they wanted to silence me and my fellow activists who were persistent in fighting and exposing the crimes committed by the government,” Gonzales said.

In 2004, he became a target of an assassination attempt. The brazen military assault under the Arroyo regime had primarily targeted the progressive people’s organizations in the Southern Tagalog region. These included Pamalakaya and Anakpawus Partylist, both chaired by Gonzales that time. In broad daylight, while he was idly standing by a little corner store waiting for a tricycle to go to town, he was suddenly shot by two men.

The Martial Law survivors present during yesterday’s protest have taught us not just to “never forget” but also to “never allow” the same breed of murderers and criminals to hold power in this country.

“Marcos’ Martial Law and Duterte’s Martial Law are no different from each other, it’s just that Duterte’s version now is undeclared. And even if it’s undeclared, the NTF-ELCAC (National Task Force to End Local Communist Armed Conflict) is there, almost all local governments have connived with military and police forces to vilify activists. Worse, the activists of today are even tagged as ‘terrorists’ while Duterte’s military has been on a killing spree every week. This makes us even more enraged,” Gonzales said.

“I am still alive. As long as I still have a stable thinking, I will never forget the political line I’ve loved and embraced through the years. There is no excuse for me, unless I get Alzheimer’s disease or any health condition which I can’t control,” he said, teary-eyed.

“We joined today’s protest because we wanted to feel like we were with the young people. The young people, they give us strength. When we see them fearlessly fighting the same kind of enemy, it gives us courage and strength that justice will come,” De Jesus ended.