You Are Here: Home → 2020 → October → 1 → Movement launched in search for justice for slain Bacolod activist

Movement launched in search for justice for slain Bacolod activist 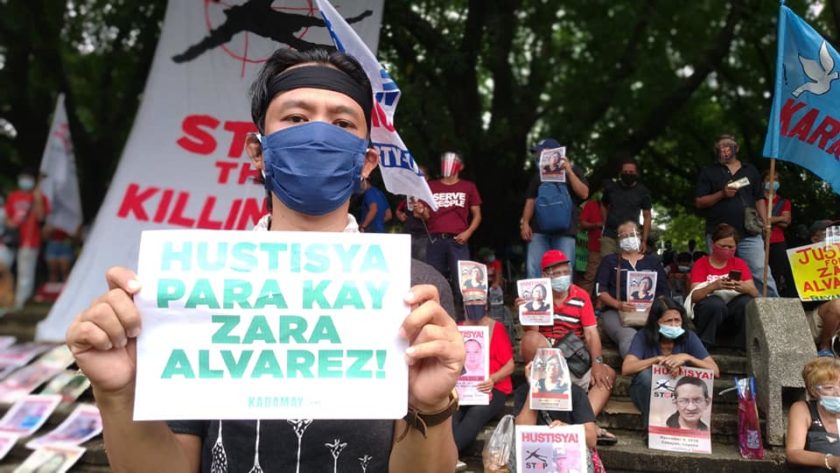 MANILA – With the UN Human Rights Council only days away from revisiting the human rights situation here in the Philippines, various groups have launched a movement in search for justice for slain Bacolod-based human rights activist Zara Alvarez.

Known for being cheerful and caring, Alvarez, one of the most red-tagged activists in the Philippines, was gunned down on Aug. 17. Her photos appeared in posters in the Negros island, alleging that she is a ranking official of the Communist Party of the Philippines.

Read: Cheerful and caring, Zara Alvarez was an activist who never backed down

She was also named in the more than 600 individuals in the infamous terror list filed by the justice department before a Manila court in a bid to declare the Communist Party of the Philippines and its armed wing, the New People’s Army, as terrorist organizations. Last year, Alvarez sought the Philippine court’s protection but the plea was denied even before she was able see her day in court.

To this day, no clear and credible lead pertaining to her case has been provided to Alvarez’s family and colleagues in the human rights work. As such, the World Council of Churches urged the UN human rights body to create an independent and impartial investigative mechanism on the rampant extrajudicial killings and human rights violations in the Philippines, consistent with the recommendations of the UN High Commissioner for Human Right, which was released in June 2020.

In a separate paper, the Amnesty International also pointed out how the breakdown of peace talks between the Philippine government and the National Democratic Front of the Philippines has resulted in a “raft of arbitrary arrests and detention of people deemed critical of the government, as well as the killing of activists and human rights defenders.”

“For years, the authorities have used ‘red-tagging’ to brand and discredit anyone whose human rights campaigning or community work they disapprove of,” said Amnesty International’s Rachel Chhoa-Howard, “Today, red-tagging has become a very real death threat.”

Nearly two months since her killing, the human rights situation in the Negros island has remained dire, with mounting cases of harassment and threats against Alvarez’s colleagues. On Sept. 26, a farmer from Kabankalan City in Negros Occidental was found dead – decomposing and decapitated after he went missing for nine days.

From 2018 to 2019, human rights group said that about 40 farmers have already been killed under the Philippine military’s Oplan Sauron, a local counterinsurgency campaign in the whole of the Negros island.

“A passionate, selfless and dedicated human rights worker in everything she did, Zara lived her faith in action in all areas of her work,” said Athena Peralta, the Program Executive for Ecology and Economic Justice of the WCC during the September 25 general debate at the 45th Regular Session of the UN Human Rights Council.

Peralta met Alvarez when she participated in a WCC pilgrim team visit last year, where the slain activist served as their ground coordinator.

“During the visit, we witnessed firsthand Zara’s faith, courage and deep commitment to justice and human rights. She knew the ongoing threats to her life as a former political prisoner; yet she continued in her human rights work for the communities she served, and to tend to the needs of God’s beloved children,” she added.