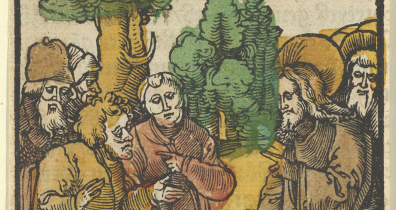 The word “hypocrite” has a dramatic origin that many of us may not know. Meriam-Webster describes it as an actor or a stage player. It comes from a Greek compound noun: “interpreter from the underneath,” because stage players at the time spoke from underneath masks that they were wearing. Today, the word “hypocrite” is someone who present oneself in contradiction to own actual beliefs, feelings or behaviors.

We do have a lot of actors around. Their stages are everywhere—in the halls of justice, in the courts, in police stations, and government offices. They are especially obvious when speaking before the media. We are surrounded by them; bombarded with their words—they tell us that everything will be alright, even though they ultimately disappear in many critical moments. We hear them preach the same things over and over again, claiming to serve and protect. Not only do they fall terribly short of what they are saying, they often act in stark contrast to what they truly should be doing.

In Matthew 23-1-12, Jesus warned the people about hypocrites. He was talking about the Pharisees, who at that time were held high and were respected by the community—or at least with the authority vested in them, they demanded respect from the people.

5 “Everything they do is done for people to see: They make their phylacteries[a] wide and the tassels on their garments long; 6 they love the place of honor at banquets and the most important seats in the synagogues;7 they love to be greeted with respect in the marketplaces and to be called ‘Rabbi’ by others.

They may have projected respectability in the offices that they held, but in the end, only their actions would matter.

The current pandemic highlights the glaring hypocrisy of our time. The people in authority, who hold the power and resources to curb and alleviate the ill effects of the economic and health crisis faced by our people, willingly disregard and deny the fundamental rights and services to communities, most especially poorer and underserved communities. The increase in police and military operations, treating people as criminals instead of helping them through genuine service, and the denial of basic and social services are all indicative of the government’s callous indifference and negligence. In addition to this, the government even blatantly attacks the citizenry, as evidenced in the widespread killings, red/yellow/terror-tagging of activists, journalists and critics, and even tagging as terrorist the well-meaning humanitarian institutions that deliver services and work with grassroots communities.

The lies and deceit in government are not the ultimate end of the hypocrisy because people’s lives are damaged and endangered. The destruction and distrust that they peddle cause killings, detention, and fear. The welfare the people as well as their sense of well-being are threatened and undermined, by the people in government who are supposed to be leading and caring for them.

One recent example of this hypocrisy is the string of cruel and callous actions taken against Reina Mae Nasino and her infant daughter River. Reina Mae, an urban-poor organizer, was arbitrarily arrested and jailed on November 5, 2019. Using a questionable warrant to search the office where Reina was staying, firearms and explosives were planted and Reina Mae was detained under the resultant fabricated charges. Her infant daughter River was born under custody. At only six weeks in age, the court ordered that River be removed from the jail, denying the small infant access to breastmilk and her mother’s care. At the age of only three months, River died of pneumonia. Even after the River’s tragic death, the Manila Trial Court reduced the granted three-day furlough of the 23-year-old political prisoner to attend the wake and burial of her daughter to just two visits of three-hours each. Denying Reina Mae’s last moments to grieve and be with her daughter was heartless. Still, this attitude was foreshadowed by the court’s indifference and cruelty in not allowing Reina Mae more time with her infant daughter when River was still alive and well. Baby River Nasino may not even have succumb to death, if she only had been permitted to remain with her mother.

The hypocrisy of it all was punctuated during Baby River funeral on October 16, 2020. Scores of policemen clogged the streets and a multitude of prisons guards surrounded Reina Mae and her grieving family. Such was not only hypocritical, but an over-exaggeration of the police’s necessity, authority, and importance. The drama was not only in the number of guards and officers, but also in the full battle gear and high-powered firearms they brandished. It was as if they were ready to go to war against a little child. The contrast of the dense flock of fully armed guards that enveloped Baby River’s burial and Reina Mae’s small form weighted down by sweltering heat, excessive PPE and handcuffs was a undeniable visual image of the state’s hypocrisy and misplaced priorities. The Bureau of Jail Management and Penology had argued in court to reduce Reina Mae’s furlough because of limited personnel. This was clearly hubris and lies. State forces say that they exist “to serve and protect.” Whom do they serve? Whom do they protect? In this time of great loss and anguish, Reina Mae and her family experienced great disservice. They were also traumatized and disrespected.

Who are those serve in society today without fanfare or accolades? Among them are those like Reina Mae Nasino and her colleagues, who have been organizing the urban poor to defend their rights and improve their lives. Human rights defenders, community organizers, and grassroots leaders are among those who work tirelessly for the people.

There are many unsung s/heroes in our church ministries, in cause-oriented movements, and in community and people’s organizations. They work and persevere, so that life and all its fullness, as God intended, may be experienced by the poor, oppressed, distraught, and marginalized.

The hypocrites in government malign the work of organizers, humanitarian workers, and human rights defenders, vilifying and tagging them as enemies of the state and terrorists. They persecute many who truly work for the betterment of our society.

We must not be discouraged. Hope springs forth in the very people of the communities where we work with. Through true service and humble leadership, communities are rising up collectively, harnessing both will and power to change their lives. The dismal situation that we are in—especially the absence of credible authorities and prevalence of hypocritical leaders—has stopped communities from struggling to address the real problems that plague our country. Rather than in elected and appointed officials or police forces, we find genuine leadership in the midst of ordinary communities: many are willing to stand up for what is right. And at their side are those who hear and heed the voices of people that, for the longest time, have been kept in the margins. These are the servant-leaders of today.

So, let us open our minds and listen, both to community leaders and to our own voices and stories. When we embrace collective dreams and see ourselves as part of shared journey toward justice, peace, and fullness of life, we will be finding it easy to work as servant-leaders too. Let us reflect on the lives of unsung s/heroes in public service, who are truly championing the people’s cause. Let us lift up the common folk who demonstrate service, especially those who are at the frontlines in this time of pandemic: the medical professionals, nurses, doctors in the barrios, community organizers, healers, activists, human rights defenders, people’s lawyers, and pastors, priests, sisters, and lay people who continue to render services and preach the good news. Let us emulate the integrity of people who genuinely serve others and dedicate themselves for the betterment of society.

Jesus Christ taught us that the greatest way to love is through service. As we serve the people, whom we love, we are also loved. The communities where we serve help us to transform our society and to transform ourselves in the process. Hypocrites have no place in building God’s kindom.