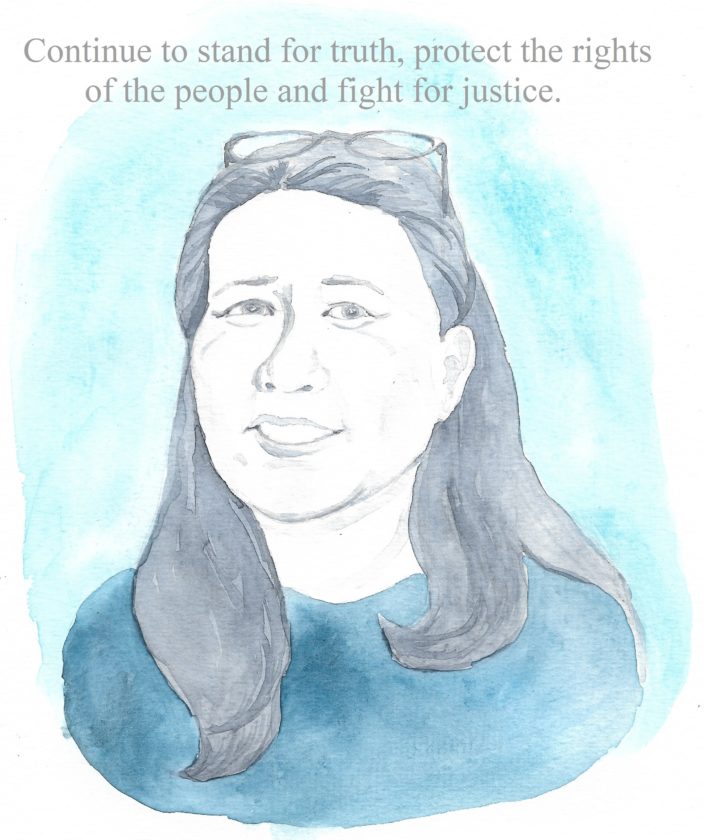 Honey May Idul Suazo, or simply Hanimay, has been known as frank, feisty and fearless. She has been admired for these traits by her friends and colleagues, but abhorred by those she had criticized for committing human rights abuses: the military and police.

She had faced them in numerous fact-finding mission on incidents of killings, strafing, and harassment of peasant and indigenous communities. She herself had been falsely charged, threatened and harassed, along with other activists from 2011 to 2017, when she was the secretary general of Karapatan-Southern Mindanao. These threats, however, continued even as she was no longer active in Karapatan.

Karapatan-SMR said that Hanimay came to Panabo to visit relatives in the area on Nov. 1, All Saints’ Day. She came with her partner, Anelo Pabuaya, but left him at a friend’s house on Nov. 2, to head alone to Davao city at 3 PM. Shortly after, she called Pabuaya on his phone, and asked him to meet her at the Panabo City Hal. She had not gone far when she realized she did not have enough money for the bus ride to Davao. But Hanimay then called up again, this time with urgency in her voice as she asked Pabuaya to fetch her because a white pick-up truck was tailing her. This was the last heard from Hanimay.

She is a single mother to a teenage girl at the time of her disappearance.

From a youth activist to human rights leader

Hanimay had a BS degree in Medical Technology from San Pedro College in Davao City. After graduating, she became a full-time volunteer of the nationwide alliance of student councils, the National Union of Students of the Philippines (NUSP) and was appointed provincial coordinator of Davao del Norte.

In 2005, she joined the (KABIBA) Foundation, Inc., an alliance of children’s rights advocates in Mindanao. She became its executive secretary and spokesperson, up to 2010.

In 2007, Grecil Buya, a nine-year-old girl was killed in a composite operation by the 8th infantry battalion of the Philippine Army in New Bataan, Compostela Valley province. The 10th Infantry Division falsely claimed that she was a child combatant of the NPA, and even came out with a photo of the child’s body beside an M16 armalite rifle which she supposedly used to shoot at government troops. The Buya family and their whole community, however, refuted this, and proved that Grecil is an awarded second grade student. In 2014, Grecil’s father Gregorio was shot dead in their home by suspected soldiers.

“This and many other cases of children rights violations has driven Hanimay’s high regard and desire for such cause and has fueled her further,” said Karapatan-SMR. In 2011, Hanimay joined Karapatan-SMR and was elected its secretary general.

As a known mass leader, Hanimay was subjected to the unfair share of attacks and threats from state agencies. Under the Noynoy Aquino administration, militarization in peasant and Lumad communities intensified as there came increased mining and logging interest in Mindanao’s natural resources. Military operations included bombing in the mountains and forced recruitment of peasants into Lumad paramilitary groups. This resulted into repeated mass evacuation of Lumad communities, including the Lumad alternative schools.

In 2012, Mindanao progressive groups then launched the campaign caravan to Manila dubbed “Manilakbayan ng Mindanao,” bringing their issues to the National Capital Region to get support for beleaguered Lumad and peasant communities. In the next years, the campaign continued and gained ground, specially with the spate of killing of Lumad activists from 2014 to 2015. Even Malacañang was obliged to issue a statement.

Subsequently, in 2015, Hanimay was among the activists collectively called “Haran 15,” who were falsely charged with kidnapping and serious illegal detention by some seven former Lumad evacuees from San Fernando, Bukidnon. The complainants had returned to their communities where soldiers were encamped.

These charges were dropped that same year, and six of the seven complainants had withdrawn themselves from the case. One, however, pursued a motion for reconsideration. In 2016, another court issued an arrest warrant for the Haran 15. Eventually, on July 18, 2016, the Department of Justice junked the charges.

In April 2019, the military started harassing Hanimay again, this time with Parlade publicizing claims of her being a “terrorist.” Parlade’s evidence? A bail bond receipt for political detainee Elizalde Cañete in 2015, bearing Hanimay’s signature for a payment of P200,000. Cañete, who had been detained since 2010, reportedly joined the NPA after his release, and was arrested in a hospital in 2018. Now, this makes her a “communist-terrorist,” by the rabid AFP general’s book.

Hanimay and Karapatan denounced Parlade’s statement, saying that such branding amounts to an actual threat and puts her life in danger. Hanimay and her colleagues in Karapatan knew the pattern too well, having documented cases of activists who were red-tagged prior to being killed by suspected military death squads.

In response, Hanimay explained her side: “I had to act as representation for the family, given the situation at that time Cañete’s father was murdered, while his mother and sibling were gravely under threat. We had worked through this legal process and most of the cases were dismissed due to lack of merit and others were bailable. The family raised the funds for the recommended bail.”

Jay Apiag, secretary general of Karapatan-SMR, affirmed that Karapatan assumes the mandate of assisting combatants under the International Humanitarian Law to which the Philippine government is a signatory.

“Regardless of what the military is trying to insinuate, assisting families of combatants, including hors de combat, is not illegal or condemnable. They can double check with the IHL provisions or go to the database and briefers provided by the International Committee of the Red Cross if they need a refresher,” Apiag said.

When Hanimay left Karapatan, human rights violations continue, with the whole of Mindanao having been placed under martial law by President Duterte.

Below is the statement issued by Honey May “Hanimay” Suazo, countering the military red-tagging against her:

“As former secretary general of Karapatan Southern Mindanao, I am being accused by Gen. Antonio Parlade and the Armed Forces of the Philippines as a member of the Communist Party of the Philippines-New People’s Army-National Democratic Front of the Philippines. The AFP and Parlade are like broken records spinning their dirty old tactics to discredit the human rights advocacy and legal services of Karapatan to the marginalized. They have gone so low, even adding personal attacks against me by dragging my husband, whom I am separated from, into their allegations.

“I am writing to clear the insinuations of what Karapatan stands for, and how it has defined my work as a paralegal worker. It is our duty to advance the issue of human rights and provide legal services to victims of human rights violations perpetrated by the state. In this context, we assist the victims and their families to stand and fight for the attainment of human rights, justice and long lasting peace.

“Part of our campaign is to serve the political prisoners, incarcerated in jails, facing numerous charges. Our obligation is to support their legal case, and it also includes facilitating the families through this process, which spawns a lot of anxiety and worries regarding their security. For this, we at times act as their representatives, if they so request, and even in posting bail, we act as bondsmen, while the financial expenses are covered by families and friends of the political prisoners.

“By law, anyone can be a bondsman as long as one complies with the requirements and valid identification provided by the court. By performing an act that is mandated by law, paralegal workers like myself are now being wrongfully accused by Parlade of having connections with the CPP-NPA-NDF.

“The accusation of Parlade shows his ignorance of the legal process. This public document released under the sala of Judge Virginia Tehano-Ang in Branch 1, RTC XI is open to the public. Being the bondsman in behalf of the family is part of fulfilling my duty before as a paralegal worker handling Cañete’s case.

“I had to act as representation for the family, given the situation at that time Cañete’s father was murdered, while his mother and sibling were gravely under threat. We had worked through this legal process and most of the cases were dismissed due to lack of merit and others were bailable. The family raised the funds for the recommended bail.

“Through the years, I have been harassed, and even charged with fabricated cases. I know this is part of the dirty tactics that the AFP throws against Karapatan and its members. But even as I am no longer working for Karapatan now, I still receive such threats. Worse, my family is also being dragged into their propaganda. I am now a single mother, and I wanted not to be disturbed by these lies. But given that the AFP continues to attack the people and its defenders under this present state of impunity, my message to Karapatan and the rest of the human rights defenders is to continue to stand for truth, protect the rights of the people and fight for justice. Stop the lies, stop the attacks on our rights.”