Address the roots of the armed conflict, red-tagged activists say

“They are fellow Filipinos who also want change… genuine land reform, national industrialization, respect for human rights, dismantling the pork barrel system and political dynasties, asserting sovereignty in the West Philippine Sea and throughout the country – things that should be fought for.” 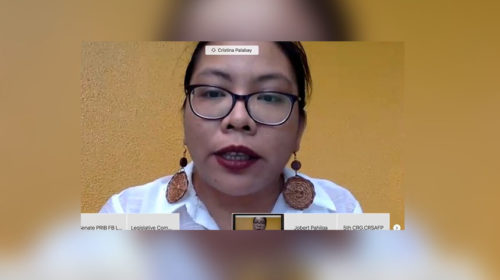 MANILA – Members of progressive party-lists and organizations lambasted the practice of red-tagging and called on the Duterte administration to address the roots of the armed conflict during the second hearing of the Senate Committee on National Defense and Security, Peace, Unification and Reconciliation on Tuesday, Nov. 24.

Former Bayan Muna Rep. Teddy Casiño told the Senate that the struggles of revolutionary forces are rooted in the historical and legitimate grievances of the people.

“They are fellow Filipinos who also want change… genuine land reform, national industrialization, respect for human rights, dismantling the pork barrel system and political dynasties, asserting sovereignty in the West Philippine Sea and throughout the country – things that should be fought for,” he said.

This is why they are calling on the Philippine government to resume peace talks with the National Democratic Front of the Philippines (NDFP) to address these issues.

Casiño said that there are those who reportedly went to the mountains because “the government is harassing them.” “Examples are victims of human rights abuses, land grabbing, or activists being hunted by state forces in their respective communities,” he said.

In the same vein, Bayan Muna Rep. Carlos Zarate said they cannot condemn those who opted to take arms against the government because it would be a denial of the roots of armed conflict in the country. He said that instead of treating them as enemies, they should be engaged to solve the 50 years of civil war in the Philippines.

Casiño reiterated that red-tagging endangers the lives of the activists. “It is guilt by association with our accusers playing the role of judge, jury and executioner,” he said.

Clarissa Ramos, wife of slain human rights lawyer Benjamin Ramos, Jr. also gave her testimony, narrating the harassment of State forces against her husband before he was killed.

She said that her husband regularly received death threats and was subjected to surveillance while handling agrarian and human rights cases.

Bejamin’s name was included in the military’s Order of Battle under then President Gloria Macapagal Arroyo. This did not stop under the Duterte administration, she lamented.

“Confluence of antecedents and compelling circumstances give me more than reasonable ground to believe that it was the handiwork of suspected government-backed death squads deployed in Negros Occidental,” she said.

This is why Dr. Jean Lindo, chairperson of Gabriela-Southern Mindanao Region, takes the red-tagging against her seriously. She said posters accusing her and other local and Manila-based rights defenders of being executioners, human rights violators and killers of indigenous tribes spread in the streets of Davao City in August.

“I consider this as a prelude to murder. If there is something I am guilty of, it is helping the Lumad communities, including the Manobo community in UCCP Haran in Davao City. I have helped educate and prepared their safety protocols during this pandemic,” she said in her testimony at the Senate.

Palabay said the practice of red-tagging should end. “Until when and how many more human rights workers and other sectors will be killed before red-tagging would be stopped?” she asked.

Meanwhile, former Bayan Muna Rep. Neri Colmenares questioned the evidence presented by the government witness Eric Celiz. He said all allegations against them were all testimonial and no official documents were presented to back up their claims such as the allegations of channeling the funds of partylist groups to the CPP.

He cited the recent testimony of National Intelligence Coordinating Agency (NICA) Director General Alex Monteagudo in the last Senate hearing admitting that they are still in the process of building up a case against them.

Colmenares also questioned the credibility of Celiz who is involved in illegal drugs and sought the protection of the military in exchange of fabricating lies against activists.

With this, Colmenares said that the end goal is to file a proscription and designation as terrorist using probable cause evidence under the Anti-Terror Law.

Colmenares said that even if the government got rid of the Makabayan bloc and all activists, this will not end the civil war in the country.

Movement Against Tyranny (MAT) convenor, Sr. Mary John Mananzan meanwhile stressed the importance of participating in the peoples movement for change. She said she is not just a member of the Catholic church but also a citizen thus she has a right and duty to criticize the government for any wrongdoing.

“You think you can kill a movement by persecuting them? You do not know history. If you see the history of the Catholic church, it only grew when there were martyrs whose blood actually watered the seed that was sown by Jesus Christ. So if you think that you will break the movement, you will break dissent by persecuting, you are very much mistaken,” she said.

Another hearing is set again next week at the Senate.