Lab Notes | Mangroves 101: Why we need to #SaveTaliptip 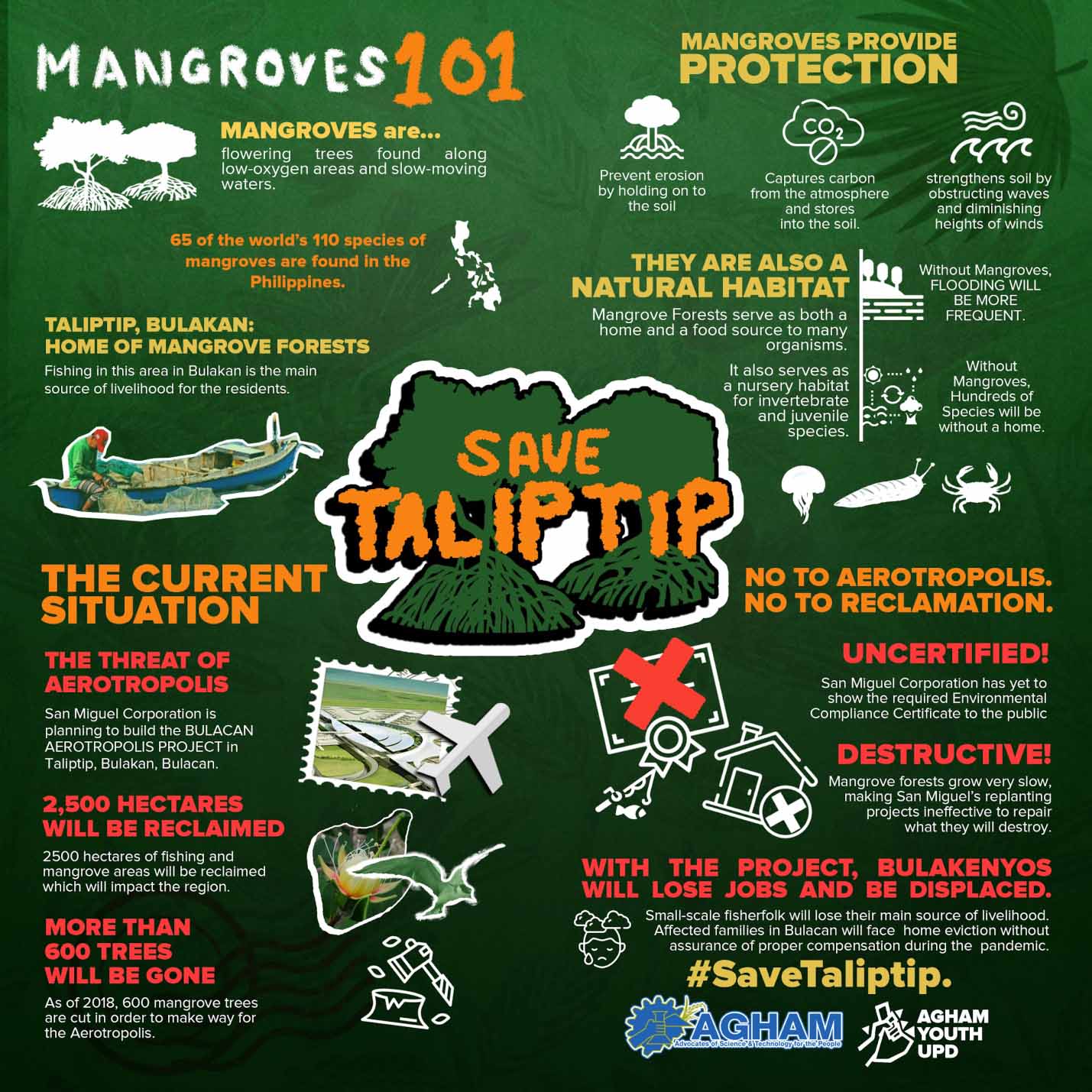 Last March 15, the Department of Environment and Natural Resources (DENR) organized a public hearing for the San Miguel Corporation (SMC) Aerocity project. Agham Youth UP Diliman questions the intentions of the public hearing as the fisherfolk of Taliptip have already been displaced while SMC is still adamant on the continuation of the project despite the many environmental threats it poses.

We describe below the mangrove ecosystem that will soon be replaced by a destructive reclamation project if it pushes through.

A special place where the sea and the forest meet, mangrove forests are found in tidal swamps mostly in the tropics. The trees that make these forests are able to grow in extremely salty conditions by either excreting the absorbed salt from their leaves or storing them in their tissues. These forests also provide the link between freshwater and saltwater as they are found in the vicinity of the mouths of rivers and estuaries.

The dense thickets of the mangrove forests provide a habitat for all kinds of organisms. Above water, its branches provide a place for migrating birds to rest and perch, and below water, the dense maze of roots provide nursery grounds for organisms such as juvenile fish and shrimp larvae. Crabs found near the roots feast on fallen leaves, and oysters, sea slugs, while filter feeders feast on the bacteria and excess nutrients found in the water and submerged soil – hence, these organisms are important for water purification [2].

But mangroves, as they barricade the coastline, also provide protection for land and the humans that live on it. They stand firm against the hazards and calamities of natural phenomena that occur along the shore – storm surges, floods, high tides – as their maze of roots and trunks break the strength of the waves, along with the flow of large debris carried by these waves [2]. In the same way, their branches and trunks break strong winds [2].

A mangrove forest can be found near the highly urban Metro Manila is Barangay Taliptip – and this particular mangrove forest is in danger of disappearing all in hopes of building an aerotropolis project that claims to helps the government decongest Manila and generate livelihood and tourism in the province.

As San Miguel Corporation boasts of the construction of a seemingly glamorous Aerotropolis spanning 2,500 hectares supposed to provide jobs and economic growth, SMC continues to actively ignore the destruction they will bring once these forests are cleared and the marine area reclaimed [1].

Once the aerotropolis is built, the hazards of the storm surfaces and high tide would be more pronounced – especially since we’re in the Philippines, a country hit by tens of typhoons a year. And this will only get worse as storms get more violent and sea levels rise due to climate change – and in fact, destroying mangrove trees release tons of carbon dioxide due stored in their soils.

Not only will it equate to a loss of a marine sanctuary, but it will result and has already resulted in the loss of livelihood of local communities that depend on the wealth of the coastline. While Bulacan’s public officials and representatives of SMC insist that the said project brought excitement to the individuals living in the area, the fisherfolk and residents of Sitio Kinse are proof of otherwise. They resisted relocation until they finally agreed to turn over their land ownership titles in December last year [3].

Despite the opposition by environmental groups, and the people of the community themselves, San Miguel Corporation shows no signs of stopping. Villagers around the area continue to be evicted in exchange for P250,000 – barely enough to compensate for the loss of jobs, source of food, and home in the time of a pandemic [4]. Groups that warn of the dangers of this construction are branded as communist rebels. And the DENR, supposedly an institution to guard against environmental destruction, refused to issue a copy of the environmental impact to the affected communities.

SMC continues to live in the neoliberal illusion that the aerotropolis will have a positive impact on Bulacan as it will provide more jobs – ignoring the fact that people will rely more on the food and resources of these marine sanctuaries. And even if the aerotropolis provides jobs, the workers from Bulacan employed in that airport will no longer have a home to go to once they see their towns and villages flooded and in disrepair due to natural calamities.

Thus, we call on everyone to join the opposition against the construction of the aerotropolis. We must send the message to San Miguel that we will not back down. We shall stand firm in defense of the environment, community, and livelihood.

This was first posted last August 25, 2020 on Agham Youth’s UP Diliman Facebook Page. Agham Youth is a student organization established in March 1999 in recognition of the need for a renewal of the advocacy for the development and utilization of science and technology that shall be of service to the broad masses of the people. There are established chapters within multiple universities including UP Diliman, Ateneo de Manila, UP Manila and PUP.